Governments Suing Citizens To Decide Public Record Access? This Bill Would Prevent It

State Sen. Keith Perry wants to keep government agencies from being able to sue people who file a public record request to get one of its documents.

Those lawsuits usually pop up when the agency isn’t sure whether or not a record is actually public and have to go to court get a judge to make that determination. The Florida Senate’s Committee on Governmental Oversight and Accountability had Perry (R-Gainesville) on Wednesday explaining the bill before its members took a vote.

“It would keep agencies from litigating as a first recourse to decide whether a record is public or not,” Perry told the committee’s six members.

The committee voted 5-1 in favor, with Sen. Darryl Rouson (D-St. Petersburg) in opposition. The bill still faces votes in the Judiciary and Rules committees.

Before it does, Perry plans to work with the Florida League of Cities to make changes to the bill. The League of Cities, an association representing municipalities statewide, is concerned about the bill as currently written.

“We feel there is, in fact, an appropriate time to ask a court… whether it’s a public record or not,” Scott Dudley, the League’s legislative director, said. “Those situations are very, very fact-specific” and thus a blanket law against lawsuits might pose problems for cities.

Perry doesn’t like how an agency’s lawsuit to determine a record’s status automatically makes the records requester a defendant and therefore liable for legal costs.

“There is never a good reason for a public entity to sue a citizen and place a burden on them when they are attempting to exercise the right to open government,” Perry said.

Rouson’s said he voted no as “just a statement encouraging you to work with (the Florida League of Cities) to work through the kinks.” Perry said one possible compromise would be reshaping the law to use the attorney general’s office as “free mitigation” between agencies and requestors to decide whether a record is public.

“That’s the direction I think we need to go,” Perry said.

Ethan is a journalist at WUFT News. He's a Pennsylvania native who found a home reporting Florida's stories. Reach him by emailing emagoc@wuft.org or calling 352-294-1525.
Previous Jan. 10, 2018: Morning News In 90
Next Florida Bill Seeks To Reshape State College System 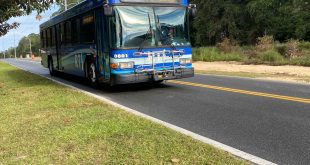