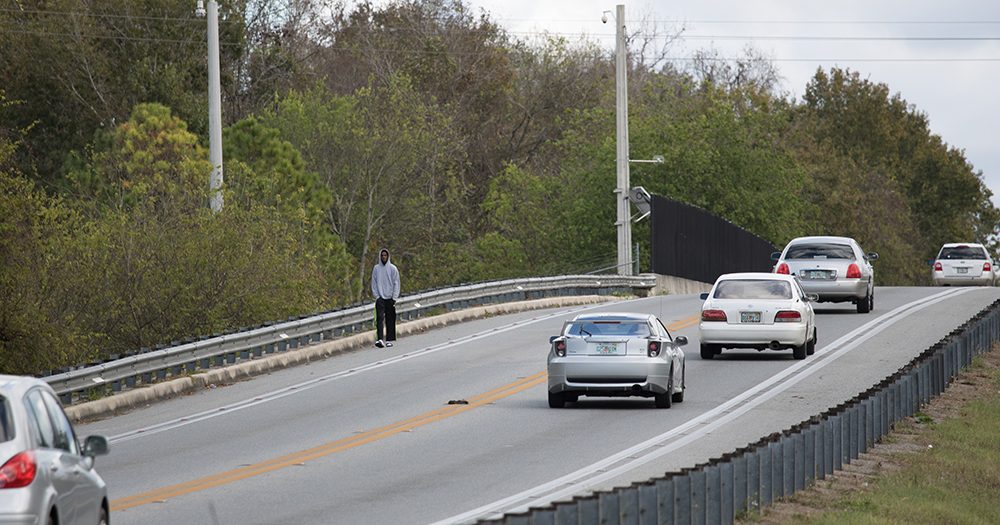 A man traverses the Southwest 20th Avenue overpass near I-75 in Gainesville. (Photos by William Clewis/WUFT News)

Why Does This One I-75 Overpass Not Have a Sidewalk?

This story is a part of Find Out Florida, a WUFT News series built from your questions. An audience member, asked us, “Why is the I-75 overpass on SW 24th Avenue among the most traveled by foot, but the least safe walkway for pedestrians? Is there even a walkway?”

When commuting over the Southwest 20th Avenue overpass at Interstate 75 in Gainesville, drivers sometimes see pedestrians and cyclists travel in the shoulder area on either side of the roadway.

Local residents who drive on this stretch of road between Tower Road and Southwest 62nd Boulevard are likely to see people using this overpass, which lacks a sidewalk on either side, to travel to and from complexes like Majestic Oaks and Woodland Villas apartments and RTS bus stops.

In terms of pedestrian safety, there’s no continuous sidewalk or walking path from just past the intersection of Southwest 43rd Street and 20th Avenue and beyond the overpass and Majestic Oaks Apartments, which is situated next to the overpass and I-75.

“The striping delineating the bike area from the pedestrian area is being scheduled for maintenance,” Singleton said. 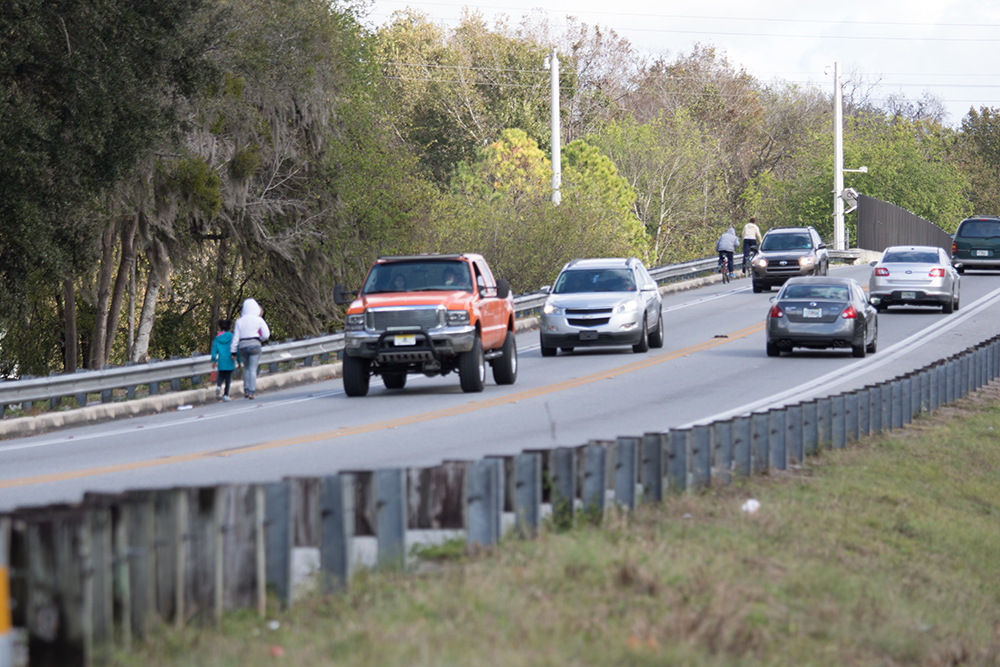 According to county records, there has been one crash in the last five years involving a pedestrian who walked into the travel lane.

Despite the low crash/accident rate involving pedestrians on this road, people still travel on the shoulders with cars speeding by.

Based on observations during an hour-and-30-minute period in the afternoon on a Saturday in early December, eight walkers and four cyclists traveled over the overpass, and one crossed the road a couple of times before going over the bridge.

From the same observations, the people traveled on the north side of the road going east toward Forest Park and a string of apartment complexes leading up to Southwest 20th Avenue’s intersection with Southwest 34th Street.

In order to reduce the traffic and improve safety on the road, Singleton said there are plans to make changes to it in the future.

“There is a long-range plan to widen or reconstruct the bridge to four vehicle lanes,” he said. “When the project is programmed, dedicated in-street bike lanes will be constructed and a multi-use path will be provided.”

Data from the transportation statistics office of the Florida Department of Transportation (FDOT) show this stretch of Southwest 20th Avenue as one of the more highly traveled roads in Gainesville. The NW 39th Avenue overpass, by contrast, has sidewalks on each side. 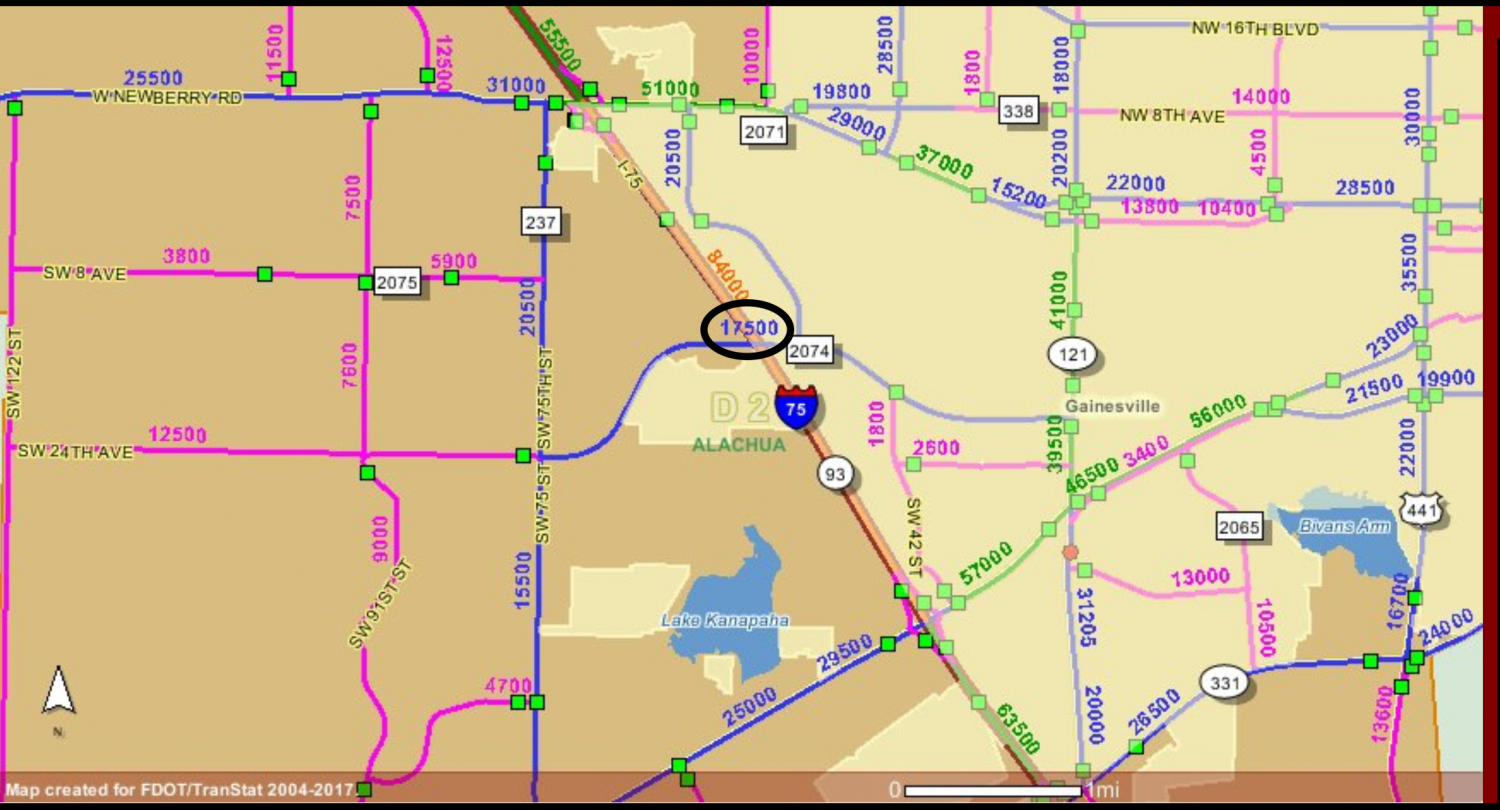 Several residents expressed their concerns and thoughts about foot and bike travel on this road. When reached out to for comment in the Gainesville Word of Mouth Facebook page, some noted the need to add a sidewalk or separate traffic from the walkway:

Every time I go across that bridge I see someone traveling by foot or bike. So, I wouldn’t doubt it having a lot of pedestrian traffic and every time I always think of how terrifying it must be to travel across that bridge, especially on foot. – Danielle Nichole, Gainesville resident

It’s poorly lit at night, and there should be something as is on 23rd Ave to separate the walkway & vehicular travel. – GD Potter, Gainesville resident

I always think about how they need a sidewalk on that bridge. I used to have to cross every day to get to the bus stop in Linton Oaks, and it seems pretty dangerous just walking on the side of the road like that. – Jessica Elizabeth Steptoe

I live off of 20th behind the fire station and drive that way every day. They need to do something!!! Spread it out and add another lane. – Jamie Burrows, Gainesville resident

It needs to be a wider road. Possibly one of the stick lights closer to the top of the bridge/hill. You can’t see anything when you’re coming over it. People always jam up and most a–holes will speed from the turning lane and try to pass you in the bus lane! My friend was side swiped by a car that did that to them. – Chelsea L McCallie, Gainesville Resident

Are you curious about something you’d like us to investigate? Send us your questions below.

William Clewis is a reporter for WUFT News and can be reached by emailing news@wuft.org or calling 352-392-6397.
Previous When The Lights Go Out And Stay Out
Next National Wal-Mart Crime Problem No Different in Gainesville