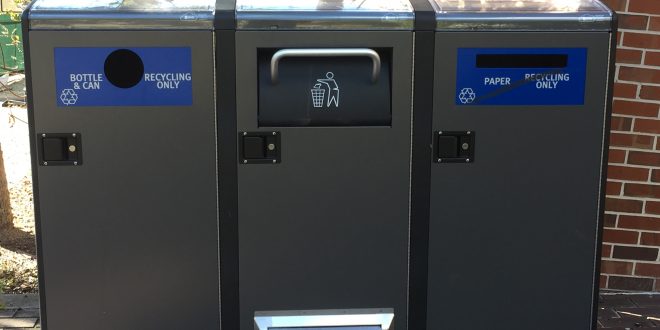 Recycling and trash containers on the University of Florida's campus. Gainesville city Commissioner Adrian Hayes Santos is leading efforts to try to make the city a zero-waste one by 2040. (Alyssa Weiss/WUFT News)

In 2015, Gainesville found itself being promoted as the Florida city with the highest recycling rates.

But it’s now showing an increased dependence on landfills and decreases in recycling, according to city Commissioner Adrian Hayes-Santos.

Hayes-Santos says he is working to trend back toward recycling — all the way to making Gainesville a zero-waste city, or one that generates no trash by utilizing methods like composting and recycling.

Hayes-Santos’ first benchmark falls on 2020, when he hopes Gainesville will be recycling 75 percent of its solid waste. His next target is 2030 (90 percent recycled) and then 2040 (zero waste).

“It’s time to make Gainesville a leader in protecting the environment,” he said in a phone interview.

Hayes-Santos’ plan — first talked about officially in August but a long-term idea he’s had since before he was elected in 2016 — includes recommendations for across the city, including its businesses and homes. They include requiring some restaurants to separate and compost food waste and prohibiting single-use plastic bags and Styrofoam.

He also wants to create an office of sustainability, like the University’s of Florida’s, to promote the efforts and educate the community about composting and recycling.

In all, Hayes-Santos has 17 proposed changes, and they come 20 years after the city last revamped its recycling program.

If and when all changes come to fruition, Gainesville could “have the most progressive recycling ordinance in the Southeast,” the commissioner said.

Hayes-Santos’ efforts are gaining a lot of support. Almost 100 emails regarding the plan have been sent to him, and all were either positive or just observations.

Gainesville resident Allison Shinn wrote to the commissioner that her family of four has been working toward zero waste itself since 2012.

She said she is offering her full support for the initiative, and she hopes to see it happen sooner rather than later.

“It is clear that our current culture of single use, disposable everything is not sustainable,” Shinn wrote. “Time is running out to make the necessary changes for our planet to support future generations.”

Pat Lavery told WUFT News he sees the need for such actions by the city toward recycling, especially for downtown businesses.

“The current options available privately are not affordable and unreliable,” said Lavery, facility and events manager at the High Dive music venue and bar downtown.

“Gainesville is known for historically being overbearing with regulations on small business but being lenient on large businesses, such as real estate development,” Lavery said.

If Hayes-Santos’ efforts do come to fruition, it seems like it’ll take some time to get them there. He said they’re in just the beginning stages, with a meeting among city commissioners on his plan’s budget expected some time during the spring.

But first, in January, Hayes-Santos said he will announce a prohibition on single-use plastic bags and on Styrofoam containers.

At a recent city commission meeting, Hayes-Santos cited Coral Gables, in Miami-Dade County, as an example of the positive impact prohibiting those materials has on the environment. His plan is to emulate Coral Gables’ ordinances to hopefully achieve the same successes.

The materials “get into the environment and then stay there forever,” Hayes-Santos said. “We need to reduce the amount of plastic that we’re putting into our environment, and we have to take these steps now to protect the city for not only us but for future generations.”

He and city staff members are prioritizing which changes to try to implement. The ones that’ll go at the top are those that aren’t expensive to accomplish but will still have bigger impacts on the environment and the community.

Hayes-Santos expects most of the changes to have a low or no cost.

Along with plastic and Styrofoam, uneaten food is another concern for Hayes-Santos. He said food waste makes up 25 percent of what’s taken to landfills, and he believes implementing a composting program will help bring those percentages down and move Gainesville to the zero-waste goal.

In another email of support, resident Kayla Sosnow said she thinks food composting and banning plastic bags and Styrofoam are good ideas. But like Lavery noted, Sosnow said she is thrown off by the lack of recycling now in downtown.

“It is strange to see patrons throwing all their bottles and plastic cups in the garbage when this city is so committed to recycling,” Sosnow wrote.

To help with his efforts, Hayes-Santos said he hopes to partner with Alachua County Public Schools and the University of Florida, which he said has its own zero-waste efforts.

He’s also been working with Zero Waste Gainesville, a community group that was founded two and a half months ago and has the same goals, to help head the initiative. The group views sustainable waste management as a method of helping solve environmental issues in the city and beyond.

Nina Bhattacharyya, a founder of Zero Waste Gainesville, said the group has been working closely with Hayes-Santos. She helped form it to show support of Hayes-Santos’ policies and seeing them implemented.

“We’re very much about pushing our elected officials to pass policies but then educating community members about what they can do to reduce waste, as well,” she said.

Bhattacharyya said she has been living a low-waste lifestyle for a while, and she’s using her experiences, combined with those of her fellow group members, to educate the public on how they, too, can reduce their waste.

Zero Waste Gainesville has a Facebook page and a website, on which it shares blog posts about different ways to reduce waste in daily life.

“Zero Waste Gainesville wants to see the momentum keep going with Commissioner Hayes-Santos and his recommendations,” Bhattacharyya said. “We’re also going to continue with our education efforts on simple things that people can do to reduce waste by attending different events, tabling and writing on our blog.”

Alyssa Weiss is a senior journalism student. She covers the zip code area 32601 in Gainesville. Feel free to email her at alyssanweiss@ufl.edu or call/text her at (954)482-2630 if you have comments, concerns or a story idea.
@@alyssa_n_weiss
Previous Dec. 6, 2017: Morning News in 90
Next Newberry Lynchings: Should They Be Memorialized?