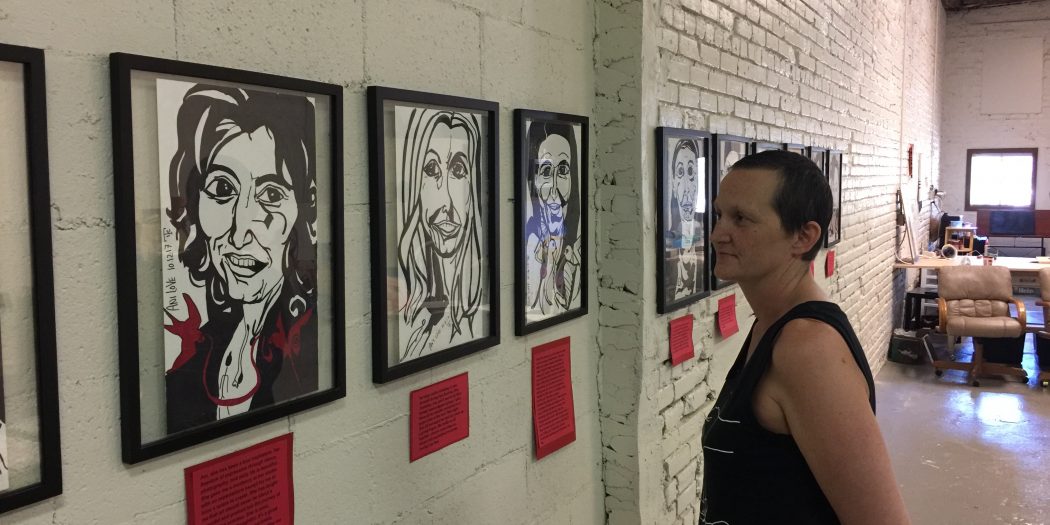 “I think that it (the studio) became a special space for people, whether they were artists themselves or people who just wanted to be close to the arts,” Aaron Coe said. “So, I think it was kind of a communal place where a lot of people could come together.” (WUFT News/Jose Sanchez)

After serving for one year as a space for local artists, Gainesville Arts Studio hosted its final show before it closes its doors in December due to the health issues its owner is struggling with.

Iris Coe-Gross, a 39-year-old Gainesville native who is suffering from stage four breast cancer, said she has come with the decision to close the studio because of her sickness. Gainesville Arts Studio has been a place, in which local artists have been able to have their own working space, share ideas with each other and exhibit and sell their work in multiple art shows.

“I love the studio,” she said. “And it has been pretty successful, but I just want to go and spend some time with my family and my kids. And if I was going to sign on for another year, I would just really have to be working a lot, and I don’t really think I have that energy yet right now.”

The final show of the studio, “If Hope Was Money, I’d Be A Millionaire”, was hosted Friday, December 1 and raised the issue of breast cancer.

“So, I started with myself and offered it to anybody who would like a picture drawn of them to celebrate breast cancer awareness month and to celebrate them,” she said. “I believe in drawing with a lot of focus and prayer with each drawing. So, that was the focus for me, and to take the focus off myself during treatment because I was still in treatment when I was doing this.”

Coe-Gross said the reasons she created the studio were to do her “healing art” and provide an affordable place for the artists in the community to be able to develop and exhibit their work.

“Because art has been an amazing medicine for me through the sickness,” she said.

Coe-Gross started to work on art three years ago after she got sick and decided to leave work for a year.

“We only had one percent chance of remission,” she said. “And, you know, I wasn’t looking or even thinking that I was going to be able to go back to work.”

Everything started one Christmas, when her aunt gave her a watercolor set and watercolor postcards to start practicing her art, according to Coe-Gross.

“I started doing some Christmas cards just to say thank you to people because I’ve had so much support,” she said. “The watercolors really drew me in and I just started to kind of play around with them afterwards and move to acrylics.”

Her friends have been the ones who have helped her running the studio by organizing the art shows while she was hospitalized and dealing with her sickness.

“You don’t need to have a space for, you know, months ahead of time,” she said. “You get in and invite everybody you know and make some money.”

According to Coe-Gross, the monthly rent of the studio is $1,300; house artists pay between $300 and $325 per month to work in their own space in the studio; for the outside artists who want to exhibit their work, they have to pay $300 to participate in the art shows.

“So, we try to keep everything pretty reasonable so people can make money and show their work,” she said. “Or if they don’t make money, don’t lose a lot.”

Artists were able to both sell some of their work and network with other people during the art shows.

“So, while you might not make a ton of money on our walk night, most of our walks you always make a connection with somebody for, you know, your artwork,” she said.

Daniel Vélez-Climent, a 41-year-old Puerto Rican who came to Gainesville six months ago after spending almost one year living in Jacksonville, said he has been going to the studio for the past five months.

Vélez-Climent considers himself a “multidisciplinary” artist who creates mosaics, art murals, acrylic paints, and sculptures. His first and only exhibition in the studio helped him to show the art community his work.

He said the studio was important for him because it gave him “the privacy to create” and the chance to be a part of the artistic environment of the city.

Vélez-Climent also praised the area in the back of the studio.

“It’s like a hidden paradise, or a hidden garden for inspiration,” he said. “So, I think that space is magical. It’s beautiful.”

He said he could not find a place like this studio when he was living in Jacksonville.

“And I couldn’t find that space that I could, you know, create, be alone or be together with other artists,” he said. “And I found it there.”

Vélez-Climent said it is important to support Iris’s decision of closing the studio.

“We, as her friends and her colleagues, we support her,” he said. “So, if she needs to move on, we are going to move on with her.”

Now, he will try to find other options near downtown.

“I would love to get that space,” he said. “But I have to be real. I am the new guy on the block. So, you know, it’s out of my budget at this time right now.”

Aaron Coe, a St. Augustine resident, painter, and Coe-Gross’s brother, said the exhibition that he did in the studio was a great experience to “kind of connect with Gainesville as a community.”

Coe reflects wildlife and landscapes with watercolor, oil and acrylic, and creates art for children.

“I think that, you know, for Iris the reality of maintaining that area and dealing with her health issues proved to be very difficult,” he said.

According to Coe, after the closing of the studio, he will try to experiment with other ways to promote his art.

“But since, you know, there aren’t that many spaces like Gainesville Arts Studio, then things like the art fairs and festivals are really your only opportunity to do something like that,” he said.

Coe-Gross said she feels the artistic community in Gainesville lacks attention outside of its cluster.

“I think people really need to get out and art-walk more and see what is going on because a lot of the time it’s the art community supporting each other,” she said.