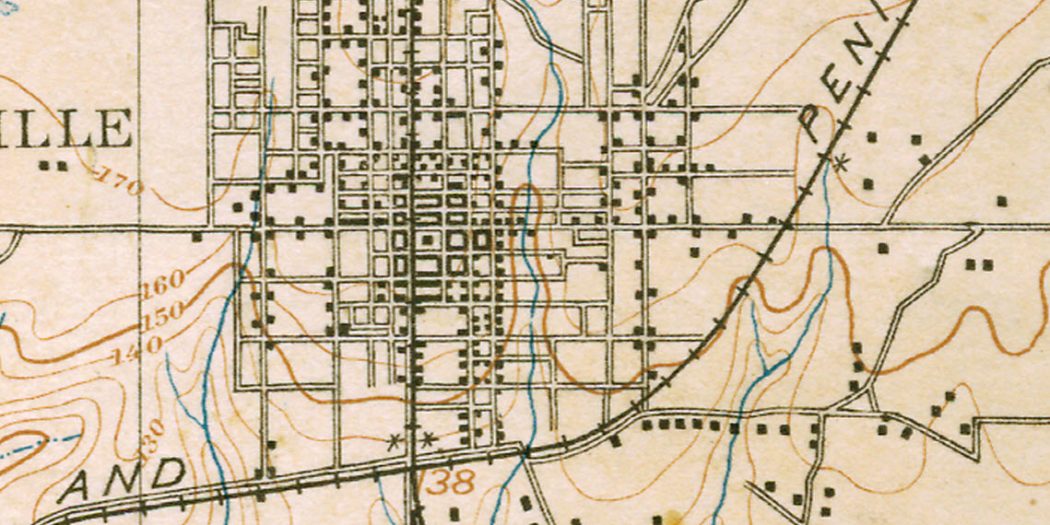 The Gainesville town center in 1894, by which time cattle drives had begun to disappear from the town. See more maps at http://fcit.usf.edu/florida/maps (Courtesy of United States Geological Survey via FCIT at USF)

When Were There Cattle Drives Along Main Street in Gainesville?

This story is part of Untold Florida, a WUFT News series built from your questions. A listener named Rachel asked us, “I’ve heard there used to be cattle drives on Main Street in Gainesville; is this true? What might this have had to do with the railroad?”

Back in the late 19th century and early 20th century, cattle used to roam freely on ranches around Florida, grazing on thousands of acres of public and private land.

In Gainesville, ranchers and ranch hands drove cattle through town to downtown by Main Street, where the railroad depot was located, according to Bobby Parker, librarian at the Matheson History Museum.

Parker said these cattle drives mainly occurred during the 1870s and 1880s, and because Gainesville was a railhead for cattle shipment during this period, cattle were sent out on the railroads.

“The drives happened to get the cattle to market so they would come to the station to be sent out around the nation,” he said.

Prior to the 19th century, present-day Gainesville and Alachua County was the center of a large Spanish cattle ranching industry, according to records from the Alachua County Municipal Building and the Matheson.

One reason why Alachua County was a large area for cattle was the fertile land on the Alachua savanna, or present-day Paynes Prairie.

According to an 1800s historical report on Florida ranching and beef production in Alachua County, the prairie was a “Grazing Eden,” and “the most fertile lands in the Alachua area are the hardwood hammocks where grow the hardwood trees, bays, and palmettos with an undergrowth of maiden cane, sedges, and grasses.”

When British traveler and historian John Bartram visited Alachua, he said, “The extensive Alachua [savanna] is a level green plain, above fifteen males over, fifty miles in circumference, and scarcely a tree or bush of any kind to be seen on at.”)

Looking at historical data and records, Alachua County and the Gainesville area was home to a notable cattle operation and still has an agricultural presence. Parker said, though, that these cattle drives stopped happening as frequently during the 1890s.

For more information and general research on this and other topics, Parker said the Matheson Library is available for researchers around the area.

This story emerged from an audience question. Submit your curiosities to Untold Florida, and we’ll find the answer.

William Clewis is a reporter for WUFT News and can be reached by emailing news@wuft.org or calling 352-392-6397.
Previous Flagler County Switches From Styrofoam Lunch Trays To Paper Trays
Next Alachua County Farms Recover Months After Hurricane Irma