Home / Health and Science / Ahead Of World AIDS Day, 26 Get Free HIV Testing At UF 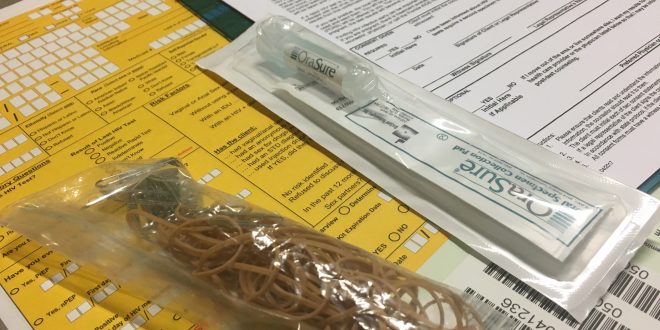 The kit WellFlorida Council uses for HIV testing. Twenty-six people received the test at an event held Wednesday at the University of Florida ahead of World AIDS Day. (Randi Ziegler/WUFT News)

Ahead Of World AIDS Day, 26 Get Free HIV Testing At UF

Tessa Walters received what she considers the bare minimum of sex education in high school.

The vice president of Planned Parenthood Generation Action at UF, a student group, said she did learn about sexually transmitted infections in her freshman biology class, but the lessons lasted only a few days.

“In Florida, there is no standardized sex education,” the 20-year-old said. “Our current system isn’t effective.”

Later in high school, at age 16, she went to a Planned Parenthood clinic for testing.

“I only went for a [urinary tract infection] test,” she said, “but that was a turning point for me.”

Walters was among the roughly 100 students and others who gathered at the University of Florida’s Pugh Hall Wednesday evening for an event centered around another test, this one for HIV.

The testing was offered for free by WellFlorida Council and was part of the Don’t Stress the HIV Test event, which was put on by several UF organizations and also offered free food, therapy dogs, and tabling by health and wellness organizations.

In total, 26 received HIV testing at the event.

The event comes just before World AIDS Day on Dec. 1. The annual day is meant to unite people from around the world in the fight against HIV, show support for those living with the disease, and commemorate those who have died from it.

Katherine Pizarro, an associate planner for WellFlorida Council, stood behind glass doors and swabbed the inside of people’s cheeks. The swabs will be used for the HIV testing.

“We take the cheek swab, send it to the health department, and they send it back to us,” she said.

This process and getting the results to the person takes a couple weeks, Pizarro said.

“It’s important for us to come to college campuses,” she said, “because for a lot of people, this is the first time they’re on their own, and people are sexually active on college campuses.”

The main focus for the UF event was inclusivity, said Jasmine Haddaway, a Planned Parenthood Generation Action member and lead organizer for the event.

“I wanted all people of different social identities to feel comfortable getting tested,” Haddaway said. “It’s important for them to take charge of their health and wellness.”

Randi Ziegler is a reporter for WUFT News and can be contacted through any of the following: Cell phone: (516) 205-9836 Email: randiziegler1@ufl.edu You can follow her on Twitter @randi_ziegler, like her page "Randi Ziegler" on Facebook and follow her on Instagram @randi_ziegler.
@Randi_ziegler
Previous Man Involved In Shooting After Spencer Event To Be Extradited To Texas
Next Nov. 30, 2017: Afternoon News In 90