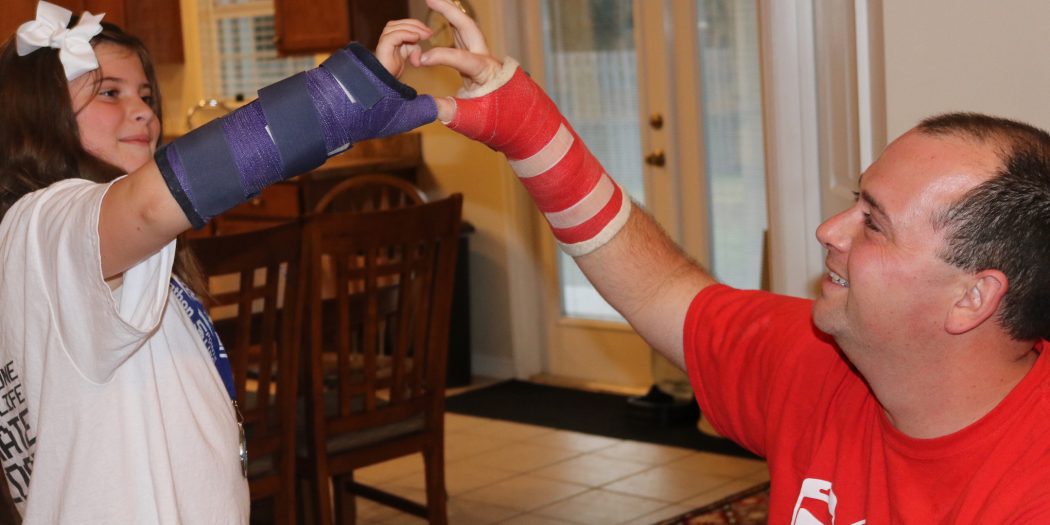 Laura Bugg was awoken by a doorbell ring just after midnight.

She figured it was her husband, who worked nights as an Alachua County sheriff’s deputy. But when she looked out the window, she saw two deputies instead of one.

They were there to deliver some grim news.

“They just said, ‘You need to get dressed because he’s been in an accident, and he needs surgery. So we need you to come quickly,’” Laura said.

Her husband, Matthew, had been hit by a drunk driver in a Cadillac Escalade before midnight near the intersection of Southwest 34th Street and Williston Road. He had been responding to another accident just past the intersection, but when he got close, the Escalade struck his car, causing it to flip once and its engine to catch fire while he was still behind the wheel.

“My first question was, ‘Is he OK?’” Laura Bugg remembered of that night in October 2011. “I didn’t know anything about the accident other than just that he had one.”

Matthew Bugg suffered a broken pelvis, all the tendons popped in his right arm and severe blood loss.

He spent three and a half weeks in the hospital and months in a wheelchair and on a cane before returning to work a year later.

“If you watch the video, there’s just no way that you would think you’re going to find anyone alive,” he said of video taken of his accident by another sheriff’s car behind him.

Though this time in their lives presented many challenges, the Buggs have vowed to make positive conclusions. They’ve done so by adopting a new tradition after a blood donation helped Matthew Bugg survive the accident.

Blood donations. Something they do together every eight weeks, when a LifeSouth Community Blood Center mobile truck visits their church, Grace at Fort Clarke United Methodist Church.

“I want a blood bus at my funeral,” Laura Bugg said.

The Buggs are two of many in or associated with law enforcement in Alachua County who donate blood regularly because of the woes their work puts before them.

“Whether they’re fire or medical or law enforcement, first responders see firsthand how the need for blood is so needed and so vital to the recovery and survival of people,” Alachua County Sheriff Sadie Darnell said. “We support that. We see the need, and we see how it can change lives.”

Along with churches, schools and workplaces, mobile stops for LifeSouth — a nonprofit blood provider headquartered in Gainesville that serves regions in Florida, Alabama, and Georgia — include the sheriff’s office and the Gainesville Police Department.

Officer Ben Tobias, a Gainesville police department spokesman, said he began donating blood in 2012 – something he said he never thought about until one of his fellow officer’s daughter was diagnosed with cancer and needed transfusions.

“Every chance we have for blood donations, I’m there,” he said. “And it’s because a little girl that needed blood.”

Tobias said he notices many others in law enforcement frequently donating.

“We want to do everything we can, even if it literally means giving a part of our body to do it,” Tobias said. “We never know when it’s going to be us that needs it.”

LifeSouth spokeswoman Brite Whitaker, who has been with the nonprofit for 12 years, said the donations from law enforcement are “a really great gift to the community” and are indeed likely sparked because of the trauma they encounter.

“It’s amazing to have those who are giving so much to the community anyway taking the time to donate blood,” she said.

But even with their and others’ support, shortages continue to arise.

In Oct. 2014, the organization received 4,173 donations total over the month for the area’s district, said Laura Bialeck, LifeSouth community development coordinator. This October, there were only 3,800 donations.

To keep their overall blood supply at a safe level, the daily goal is 100 donors – a target that Bialeck said will be difficult to maintain with the upcoming holidays. With the anticipated drop and current emergency need for O-negative – the universal blood type –  she said it makes each donation much more important.

“Everyone who does is a hero,” Bialeck said about blood donors.

Other common times LifeSouth sees a lower amount of donors are during natural disasters and over the summer.

“It’s just fear of the unknown,” Whitaker said of why people might not donate. “But it’s one of those things that I think if people really took the time to do on a regular basis, they would find it rewarding.”

For people unable to give blood, she recommended encouraging others to do so.

“Most people could probably think about a relative or friend who has probably received a blood transfusion,” Whitaker said. “I think people don’t realize how much blood donation really touches their lives.”

Darnell said she experienced being helped by donated blood personally.

“I had a situation with severe anemia a while back, and I had several blood transfusions that helped save my life,” the sheriff said. “I’m a believer in it. We’re all looking for a purpose in life, and one purpose in life is to help others. And donating blood is certainly one way to do that.”

Gainesville police Sgt. Don Geelhoed said he used to donate to LifeSouth every time its truck stopped by, but he had to stop because of medication.

Nevertheless, the most recent mobile visit to the department was successful, Geelhoed said.

“If you have a chance, go out there and donate some blood,” he said. “You’ll save someone’s life.”

On Nov. 3, the Buggs celebrated his 35th birthday, just five days after the six-year anniversary of his accident.

Laura and Matthew Bugg both said it’s something that’s now just a part of their routine – a part that they’ll continue and keep encouraging others to do as well.

“When I walk on [the blood bus] and we’re the only ones there, it breaks my heart,” Matthew Bugg said. “You see these things like mass shootings or tragedies, and then people line up to donate. There should never be blood shortages.”