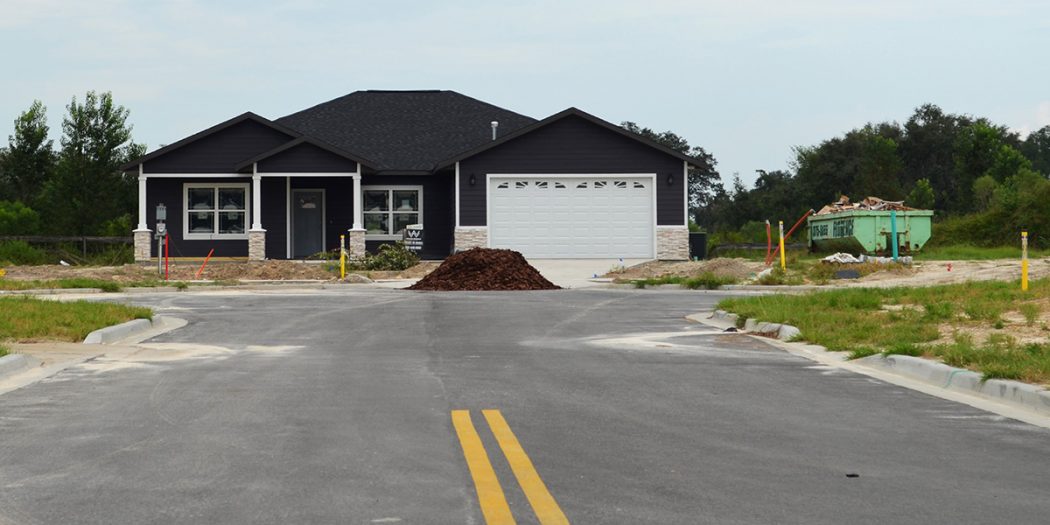 A house in the last phase being built in the Newberry Oaks subdivision. Some residents there are worried that blasts from a nearby limestone mining operation might be damaging their homes. (Nicole Dan/WUFT News)

‘Feels Like An Earthquake’: Newberry Neighborhood Fears Damage From Limestone Mine

Marvin Rippner’s house northeast of downtown Newberry rattled from a mining blast on April 25, 2016, and he recalls being knocked off his couch.

Investigating the cause, he discovered that limestone is being extracted from a mine 3,000 feet from his home.

“We hear, ‘Boom,’ and the house starts to rattle, and we think there’s a war coming,” the 66-year-old veteran and retired Gainesville police officer said. “And let me tell you, that’s not a good feeling.”

Since the blasts started in early 2016, Rippner has been writing and calling in complaints to various local, state and federal officials in an effort to get them stopped. But he isn’t the only one upset in the Newberry Oaks subdivision, a relatively new development, that is now adding its last group of houses.

Jim Tomchak, who moved into the subdivision more than three years ago, said he feels the blasts too. When they happen, Tomchak said residents take to the neighborhood’s Facebook page.

“Generally speaking, what will happen when there’s a blast, you’ll see folks posting on [the Facebook page], ‘Did you feel that?’ ‘Is everybody OK?’” Tomchak said. “It almost feels like it’s an earthquake, except it just doesn’t continue to ramble. It’s just like a big boom and you get a little bit of shake, but it doesn’t continue or prolong.”

Newberry Oaks resident Greg Norman said he has noticed cracks on his house since buying it in 2014, but he isn’t yet fully convinced whether it’s the mine, his house settling or both.

“I’m going to say everything’s hearsay until I have some sort of geological survey. … But I have numerous cracks on the outside of my house, [and] I’ve got cracked tile on a couple inside my house, as well,” Norman said.

“They pretty much get me every time,” he said of the blasts, which he also compared to earthquakes. “I know they get my neighbor too.”

“I do not think the mining operation is a detriment,” he said.

When Rippner expressed concerns, Weseman told Rippner that he had signed papers acknowledging the mine’s existence upon buying his house.

“The people that owned the mine sent their lawyer to the [Newberry] city commission meeting just wanting to inform everybody that there was a mining operation there,” Weseman said. “So we did that to disclose the mining operation up there.”

Numerous calls to and messages left with Commercial Industrial Corporation, the owner of the mine, were not returned. The blasting firm listed in Bureau of Fire Prevention documents, Florex Explosives, confirmed that they still handle the blasts at the mine but refused to comment further.

Rippner said that had there been a public announcement about the mine, he would have asked many questions of officials. He said that after talking with Weseman, he checked his closing paperwork and found that he had indeed signed a paper saying that he was aware of a mine “northeast of the subdivision.”

“My disclosure says that there’s an active, open pit mine operation [northeast] of the subdivision,” Rippner said. “Well, I asked a lawyer about the verbiage, and he said that’s about as useful as toilet paper.”

“I signed a lot of papers during closing, which we all do,” he added. “Nobody ever pointed out that there was a mine 3,000 feet from my home.”

Resident Tomchak, however, said he never signed the mine disclosure. Norman also said he didn’t sign the same document as Rippner because his house was a bank foreclosure.

Rippner said that when he bought his house in 2006, there was no active mining. The street where the mine is now, Northwest 218th Street, was blocked off, he said.

But then, in 2015, Commercial Industrial Corporation was issued a business license for the mine, documents show, and Rippner said he has felt the blasts since that first one in April 2016.

“They should have never approved a subdivision that close to a dormant mine that could have been reopened at any time,” Rippner said.

Rippner filed a complaint on Nov. 21, 2016, with the state Bureau of Fire Prevention, which compiles annual reports on Florida mining operations and fields residents’ complaints on them.

That May, months prior to Rippner’s complaint, the bureau had found that the blast was within state regulations. (This and other mine measurements are taken by non-governmental, private firms.)

When residents do feel blasts, they should log them for any complaints they might submit, said Jon Moore, a spokesman for the Florida Department of Financial Services, which oversees the Bureau of Fire Prevention.

“If someone were to issue a complaint, it’s very crucial to have the date and time of the blast,” Moore said. This allows experts to match each blast to seismographs, he said, adding that the state does have statutes outlining vibration limits.

But such mining limits aren’t universal, said Ted Krauthammer, a professor of civil engineering at the University of Florida. Instead, limitations on the blasts themselves and the distance from the mine to people’s homes are site-specific, he said.

“The people have damage in their homes, like cracks and things like that, and they don’t pay attention to it until there is an explosion nearby,” he said. “And then they’re looking for what might have happened, and they see the cracks that already existed previously.”

“So it is not simple just to say there is a crack and that crack is related to a blast,” he added. “One has to analyze the blast and make sure it exceeded allowed limits.”

Rippner also filed a claim with his insurance company for the damage, and but the company denied the claim, stating the damage was due to the settling of the house, not mining blasts. He has also talked with attorneys, who all told him they wouldn’t take on the case.

“Nobody’s willing to do anything,” he said.

Newberry Mayor Jordan Marlowe, who was elected in April of this year, said that no one has brought this complaint to the commission since two years ago when a resident emailed the commission about the mine blasts.  The city then asked the state to come in and take measurements, which were under the limit.

“It’s a state-regulated industry, so there’s not a whole lot as a city we can do except for getting our citizens to the appropriate governing authority to get the complaints to them,” Marlowe said.

Marlowe said that it would have been difficult for the commission to restrict building Newberry Oaks so close to the mine when there are houses that are even closer to the facility.

Weseman is currently expanding the last phase of Newberry Oaks.

Nicole is a reporter for WUFT News and can be contacted by calling 561-543-8861 or emailing ndan@ufl.edu.
@nicolekdan
Previous Alachua County Elementary Schools Need Space And Money
Next Nov. 27, 2017: Morning News in 90