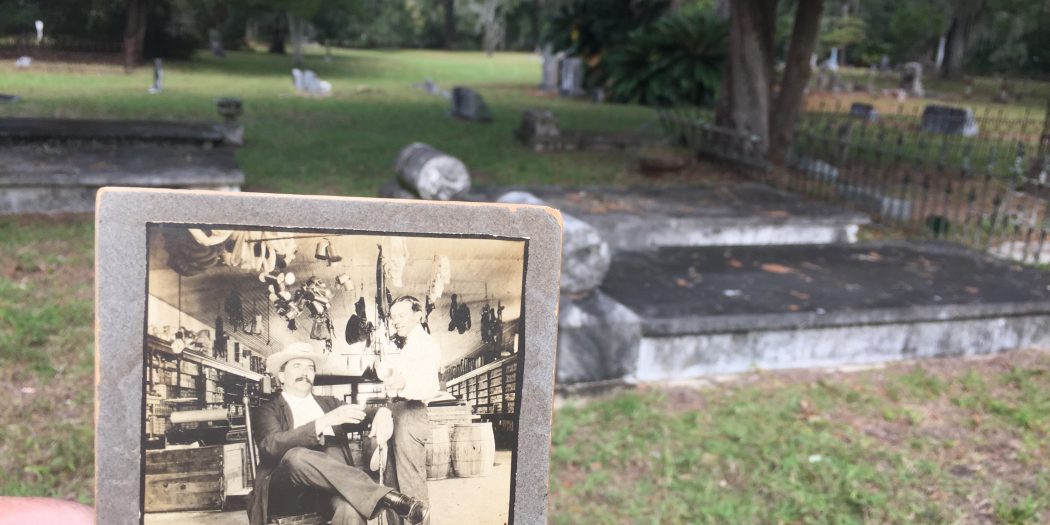 Joe Hancock holds up a photo of Furman B. Williams, a celebrated Alachua resident, over his actual gravestone in the Newnansville Cemetery. Furman B. Williams built the home the Ivy House restaurant once resided in. (Bailey LeFever/WUFT News)

On a cool November morning, the cemetery of Newnansville is quiet except the buzz of a lawnmower. The graves honored here and there with bunches of flowers.

Joe Hancock, president of the Alachua Chamber of Commerce, comes to the cemetery often. His interest in history led him to spend afternoons poring over the tombstones.

The cemetery is full of hidden gems, Hancock said. The cemetery especially holds much of Florida’s war history, as many Union and Confederate soldiers are buried at the site, grouped in families with the oldest families towards the back of the cemetery.

Everything here reminds the city of Alachua about its history.

Just about all that’s visibly left from the once bustling former seat of  Alachua County is a cemetery, part of a road and forest green marker bearing the history of Newnansville for when the stories don’t live on.

Gone are the Methodist Church, the railroad and the homes that once populated the bustling town of Newnansville.

Newnansville was once a thriving town that was founded approximately two years after the founding of Alachua County itself. The city’s key spot on the Bellamy road, Federal Land Office and U.S. Army Fort Gilliland kept the area developing for many years.

“Newnansville was quite a thriving community,” said Archie Matthews, records bureau chief for the Alachua County Clerk of the Court. “It was way out on the frontier.”

But like the wooden buildings that once stood there, much of its memory has faded, especially with young generations, Matthews said.

In an effort to restore its memory locally, the Alachua County Historical Society has partnered with the Chamber of Commerce and county schools to remind the community of the town’s rich history. Historical presentations during Chamber of commerce meetings help to bring interest to town history, with the hope that the members will share Alachua’s history with their children.

Remembrances of Newnansville are kept primarily by those native to Alachua County, said Archie Matthews. Matthews is a longtime Alachua resident who now presides over the historical records of the town as the local records bureau chief. Although all that is left is a cemetery and a part of the road running through its grounds, there is a lot of history to remember in the area.

Newnansville was established between 1824 to 1826 by the Dell brothers, who had come down to Florida after the Patriot War in Florida and the War of 1812, Matthews said.

The town was named after Daniel Newnan, a Patriot War hero, and became the biggest metropolis in range to St. Augustine.

“Sadly, the community went away,” Matthews said. “It ceased to exist when there was a vote in 1854 to establish the new county seat in Gainesville.”

The city continued to decline even more when the Savannah, Florida and Western Railway bypassed it in 1884, and the City of Alachua has been founded on a railroad line.

Besides the homes that lie across the road from the cemetery, the rest of the town’s buildings no longer exist.

Over time, buildings from the original Newnansville were brought to the city of Alachua, and only a few could be found by the 1950s, Matthews said.

“When I was in high school in the 1970s, there actually was a bandstand at the city park in Alachua that had been moved from Newnansville,” Matthews said.

“Those who take the time to stop and read the historical marker on the side of the road would then get an understanding of how major a place it was at that time,” he said.

The Alachua City Historical Society was established in 2002 to help current county residents engage with the memory of Newnansville and other historic places in the county, society member Vada Horner said.  The biggest obstacle to preserving and spreading knowledge of Newnansville and the city of Alachua is a lack of funds.

Donations would allow the society to build a permanent headquarters to better collect and display more town artifacts, Horner said.

“Unless you’ve got money, then you’re not going to be able to get a building,” she said.

Horner worries that upcoming generations will fail to see the importance of carrying the stories of Newnansville forward to their children.

A building to house artifacts, photos, and digital displays would allow the society to appeal to young learners accustomed to exciting digital learning, Horner said.

“It just makes it a little more difficult with the younger ones. You need tangible things to look at,” Horner said. “They need something that they can touch and feel and relate to in their daily life. “

The society does hold essay-writing contests and presentations on the history of the area, but original photographs would help make the history seem more real, said Emily Matthews, president of the Alachua County Historical Society.

Obtaining historical photographs of the old Methodist church or the courthouse would be important finds, Matthews said. The photos would help the public to realize the role of the area in Florida’s history.

There are photos the society cannot get access to that people still own, or have forgotten they own that they would love to digitize, Emily said.  As the world becomes more digital, the Society would like to reach more children in this way.

“It’s got to be where they’re looking,” Emily said. “It’s got to be computerized, digitized. For them to sit down with a book or just listening doesn’t help as much as it used to.”

Digital access would also increase interest from adults in the community. The need for an interest in local history is integral for those living and working in the community, especially as they get older, said Gil Coerper, mayor of Alachua.

“When you’re at an early age sometimes that falls by the wayside so hopefully when you’re an adult you want to revisit that,” Coerper said.

The city has a responsibility to engage its constituents with the history of Newnansville and Alachua, Coerper said. A comprehensive, yet digestible book on Alachua’s history would make it easier for busier citizens to gain historical background and appreciation for their home.

Hancock looks for historical research beyond Newnansville to teach residents about Spanish and African history that is overlooked, Hancock said.

“It kind of just gives you a little more pride in the area and where you come from and its roots,” Hancock said. “It’s something neat to know about the area that no one really talks about.”

The Chamber also houses display cases of artifacts that members and the public can browse through and discover information on their own, Hancock said.  In addition to information donated by local churches, schools and founding families, the Chamber is working with the Railroad Club to build a replica of the railroad system that “built” Alachua.

“The whole point is to expand our knowledge of our history here,” Hancock said.

The response to Hancock’s presentations has been positive among the participants. The Chamber hopes to build a website and expand its community outreach within the next year with fundraising.

In the meantime, Hancock is exposing his two young children to Alachua history, taking them out to the cemetery on Veterans Day to put flags on the deceased veterans’ graves.

His children love learning about what the tombstones mean and Hancock hopes they understand the cemetery’s historic importance.

“It’s kind of becoming a tradition for us,” Hancock said. “The kids like it because they’re learning to respect our veterans.