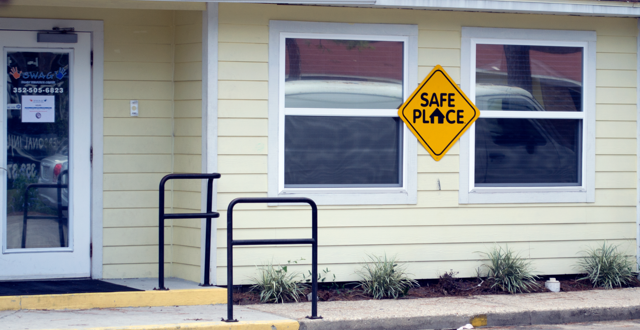 The Southwest Advocacy Group Family Resource Center in Gainesville. The center has played a role in the dramatic decrease in child abuse cases in Alachua County since 2008. (Victoria Pavlock/WUFT News)

Martie Gillen has provided her money, time and heart to children when they’re most in need.

Gillen — one of what experts say is a relatively small number of foster parents per foster child in Alachua County — has taken in 11 children over the past three years.

“There’s so many kids that need a home,” said Gillen, an associate professor in the Department of Family, Youth and Community Sciences at the University of Florida. “If not us, then who?”

Alachua County ranks ninth for total foster children among all Florida counties. These children are generally taken away from their homes because of abuse or neglect.

Alachua County’s and the state’s rates of child abuse between 2007 and 2016 are shown in the below graph. 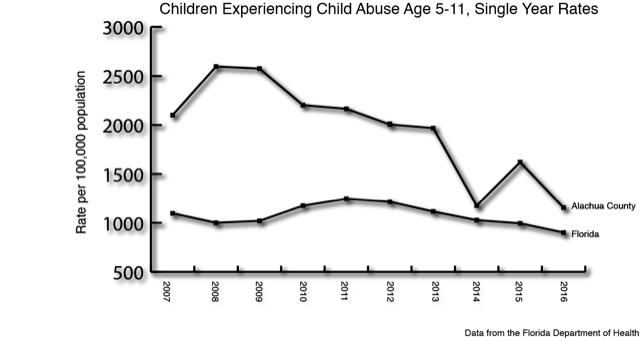 Experts attribute the county’s reductions to on-the-ground and community efforts to provide at-risk youth and their families more and better resources and support.

“We see the growth, we see people reaching out to us nationally, and we see the impact that it has had with the children we do serve in the child welfare system,” said Amanda Elliot, who manages Gainesville’s Southwest Advocacy Group Family Resource Center, or the SWAG center.

The Partnership for Strong Families, which provides child welfare services in North Florida and started the SWAG center in 2009, has worked over the past decade to reduce the child abuse rates in the county, particularly in areas southwest of the Gainesville city limits.

Strong Families identified seven neighborhoods west of Interstate 75 between Southwest 20th and Tower Road that had significantly high levels of child abuse. (This area is considered a “high-crime” one by law enforcement.)

It includes the 32607 and 32608 ZIP codes, which, as of 2009, had the most child abuse cases in the county, according to numbers from Florida’s Department of Children and Families. (Case numbers are divided by ZIP code below and are from 2009, the most recent year available.) 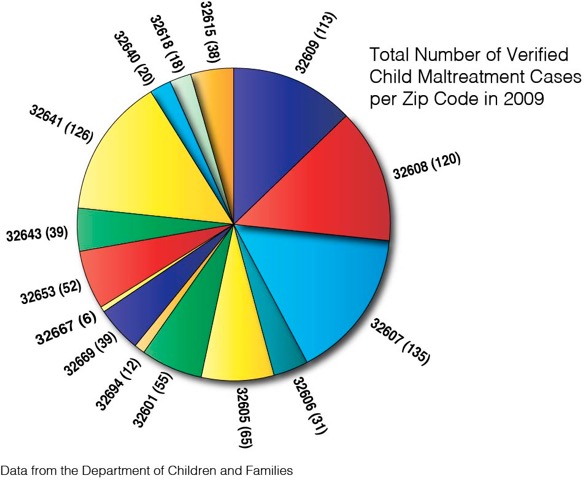 To combat the abuse, Strong Families established a partnership in 2009 with the Alachua County Library District to provide resources to families, according to Patty Carroll, the organization’s director of community relations and recruitment.

Then, in June 2012, Strong Families officially opened the SWAG center in the heart of the 32607 ZIP code. The center is meant to provide the same services as those offered through the library district but at a greater scale.

Services include an after-school program, personal finance and computer classes, free food and clothes, and connecting adults with jobs.

Elliot said the center serves about 1,100 patrons per month.

“Why this recourse center exists and why the disparities exist is because this area of town is typically affluent,” Elliot said. “We just happen to have a pocket of disparities in the middle.”

At least in part because of this work, rates of child abuse cases have, like the county overall, dropped around 50 percent in the area surrounding the SWAG center, Elliot said, referencing data from Strong Families. (The evolution of this data, which tracked cases from 2008–09 to 2014–15, is shown in the graphic below.)

The children living near the SWAG center are zoned for schools that, on average, come from a wealthy tax base, so they usually do not qualify as Title 1 schools, which are given more funding for community outreach and counselors, Elliott said.

The SWAG center has been able to fill in some of those gaps that schools haven’t been able to, Carroll said.

“The whole idea is to work with families before they get to a crisis,” she said. In other words: “The goal is to prevent child abuse before it happens.”

But schools still need to have resources themselves to address children who may be undergoing trauma, said Dorene Ross, a guardian ad litem (someone who represents children in court) and a retired UF professor for at-risk youth education.

“It is important for a teacher to not assume that a child is under-performing because they are not capable or because they don’t want to,” Ross said.

Teachers are what’s called mandated reporters, meaning they have a legal obligation to report any suspicions of child abuse. If they don’t, they can be penalized with a fine, misdemeanor or jail time.

Outside the legal realm, teachers reporting possible abuse is a moral obligation, said Larry Forthun, an associate professor of youth development at UF.

“It’s in a child’s nature to want to learn, and if a child is not learning, then you need to investigate,” he said.

Forthun said teachers should look for physical indicators of child abuse, such as bruising or cuts. Other indicators include changes in mood and avoiding questions about family or home life.

When children do end up being taken from their families and put in foster care, they will often be distant or removed in school because of the mental trauma, Ross said.

“It is important that a teacher helps a withdrawn child find ways to express themselves,” Ross said, “either through writing or art or through having a little extra time to talk to a teacher.”

The family-to-foster-care process also usually involves changing schools, which can add to the trauma, Carroll said

Good foster parents help in the changes, but finding them in Alachua County has been a challenge, she said.

“A huge barrier honestly is the number of foster parents we have,” Carroll said. “The more parents, the more we can make sure that a child is still sitting next to their friend in class … so their education doesn’t take a downturn as a result of a situation they cannot control.”

Though foster parents do receive a stipend from the state (between about $450 and $540 monthly, depending on age), the stipend often doesn’t cover all the costs that come with caring for a child, said Gillen, the foster parent and family, youth and community sciences associate professor.

Potential foster parents “need to make sure that you have … personal money that you can use,” she said. “And I think that’s probably one of the public misconceptions: Some people think you do this for the money. There is no money.”

So foster parents can use all the support they can get, Gillen said, whether it’s donated clothing, diapers or formula, or services such as babysitting or cooking. (Strong Families, Pajama Program, and the Florida State Foster/Adoptive Association are some of the organizations that do work in Alachua County that accept such donations for foster children and families.)

“These children are our future. It’s as simple as that,” Gillen said. “There are too many getting left behind. These cycles of generational poverty and abuse have to be broken.”