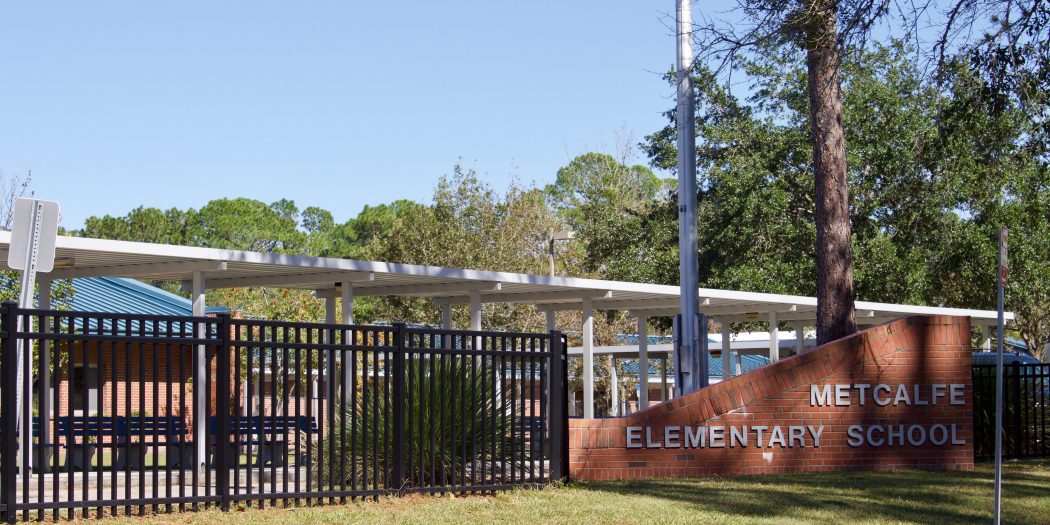 The outside of Metcalfe Elementary, named after Willie Adele Metcalfe in 1960. Following the implementation of a new education bill in July, Metcalfe will have three years to increase its school grade or face closure or conversion into a charter school.

Metcalfe Elementary serves 320 students, grades one through five, within Alachua County Public Schools and has been a staple within the community for decades. Yet, for the past eight years, Metcalfe has scored grades of C or lower, dropping to an F in 2012 and scoring a D for the 2016-17 academic year.

In the 2012-13 academic school year, Metcalfe began using the Continuous Improvement Management System (CIMS), which provides districts and schools with an online platform for collective planning and problem-solving.

Metcalfe’s goals include increased scores in math and reading. Each of these goals also includes a list of barriers that inhibit achievement and available resources to help remove those barriers.

Some of these barriers include lack of prerequisite skills needed to master the grade-level material, lack of parental involvement and loss of instructional time in class due to discipline. Resources available to assist schools and students include district-developed pacing guides, school-wide positive behavior intervention support, and district- and school-created progress monitoring assessments.

With the help of after-school programs, such as 21st Century and Metcalfe Extended Day Program, students are getting more exposure and practice with class material. Berry said families are also showing increased support at home to help students.

“We anticipate Metcalfe showing a lot of growth,” Berry said. “We have every bit of confidence that they will show improvement.”

Gov. Rick Scott signed a new education bill in July 2017 that speeds up the timetable for consistent D- and F-rated public schools to raise their letter grades. Schools that fail to improve their grade from a D or F within three years will be required to close or convert to charter schools.

Berry acknowledges this shorter window for improving Metcalfe’s school grade, however, he said they still have ample time to implement plans for increasing its grade.

Along with new requirements from traditional public schools, the bill also includes provisions for charter schools.

Among other things, the provisions include a new $140 million School of Hope program to attract proven charter schools to areas where existing public schools struggle. It also removes caps on high-performing charter schools that want to grow in areas where existing public schools are low-performing, making it easier for them to expand and receive additional taxpayer funding.

There are 15 charter schools in Alachua County and 45 public schools and centers.

Caudle said almost all charter schools in Alachua County are family-style operations, meaning they are locally controlled and have a small enrollment population.

“The concern is if we have larger for-profit schools come it could affect the county because they’ll want to make money,” he said.

Large charter schools looking to make a profit would cherry-pick students who are more likely to perform well and have less need, said Caudle.

“At that point, you have privately owned schools running on public funding,” he said.

The newest charter in Alachua County, Resilience Charter School, opened its doors in 2016. This is another locally-controlled, community-based charter, which serves grades six through 12.

Jenny Hill, director of Resilience, said she is not interested in competing with public schools in Alachua County. Like the other schools in the district, Hill said Resilience exists to serve the students.

Lizzie is a reporter for WUFT News and can be contacted by calling 239-206-7425 or emailing evasquez23@ufl.edu.
@lizziemvasquez
Previous UF Students, Faculty And Staff March Along Stadium Road in Flag Parade
Next New Commerce Park Coming To Marion County