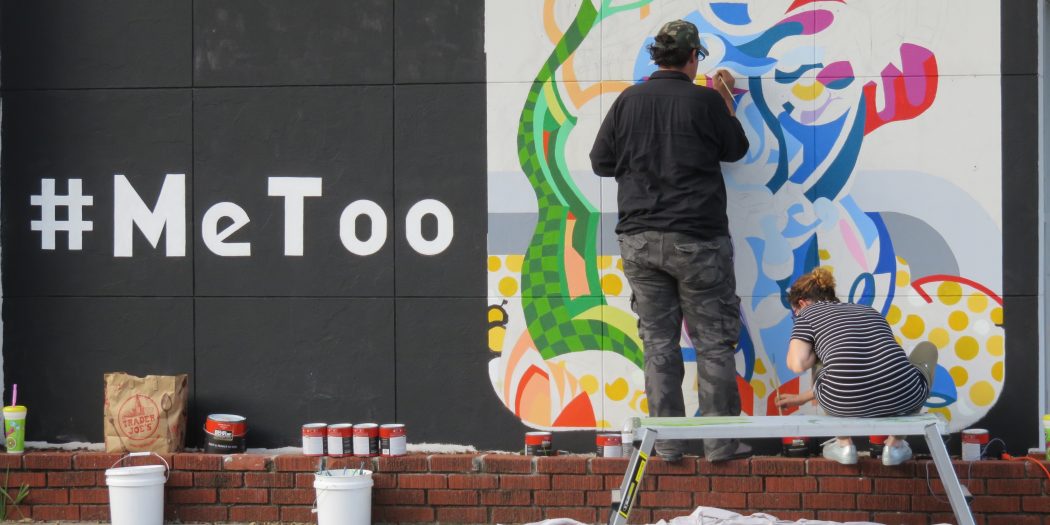 Salsa music traveled along First Street Saturday, beckoning people to a scene of color and collaboration.

A man guided children and adults alike in painting the collective pieces of a mosaic-like sketch of a woman on the side of a building. Some people painted and some stood back to watch, letting out an “ooh” or an “ahh” over the various colors dancing in their vision behind 3D glasses.

“It is very nice because we can be proud of something,” said Manisha Ranade, a local resident who has lived in Gainesville for 17 years. “It makes you want to stop, look at it, and admire it.”

Artist Daniel Vélez-Climent, in coordination with the organization 352 Arts, a major supporter of arts in Gainesville, and the City of Gainesville Parks, Recreation and Cultural Affairs Department, is overseeing the three-day process of completing “Shackles.” A mural, located at 200 NE First St., is connected to the nationwide hashtag “#MeToo,” which is used by victims of sexual assault speaking up about the issue on social media.

“The idea is somebody is breaking down,” Vélez-Climent said. And the different shapes and elements are either “building or destroying her.” Color, for example, plays a big part.

“Yellow is the color of hope and represents all the hope, love and respect.”

Vélez-Climent, 41, is an artist who has completed 43 projects, consisting of murals, mosaics and sculptures. A majority of his work was done in Puerto Rico and the Dominican Republic, and now the U.S. His projects have been created with the help of community members, as he teaches them to paint.

He began community murals in Puerto Rico with the Coup d’état Community Power Initiative at Studio Lero Lero. This project was started to help high-risk communities come together.

“With art, we showed them how they can break from those chains and have a better life.”

Local student Jessica Lynn Melgaard-Cyman, 25, spotted the mural on her bicycle Sunday and stopped to help.

“It was just really cool,” Melgaard-Cyman said. “I really appreciate the unification of what he’s doing.”

In regards to the mural’s connection to #metoo, Melgaard-Cyman said, “It is really supportive to people who have ever felt unsafe; this is a way for people to get support without having to talk.”

Maria Vélez-Climent, the artist’s sister, 35, also helped paint the mural. She said that it is great because each individual in the community can go back to see the piece that he or she painted.

“That’s kind of the whole circle,” she said.

Vélez-Climent has 500 pairs of 3D glasses with him for people to enjoy the effects of contrasting colors, lines and the use of 3D pigment mixed with acrylic paint.

“It’s a little bit of history in the making. Hopefully, it’s not going to be the last one,” Vélez-Climent said.

Christena is a reporter for WUFT News and can be contacted by calling 954-793-6813 or emailing christenacarollo@gmail.com.
Previous In Photos: The Pets And Patriots Foundation Hosts Charity Pup Ruck 5K Run At Depot Park
Next In Photos: The 36th Annual Downtown Festival & Art Show