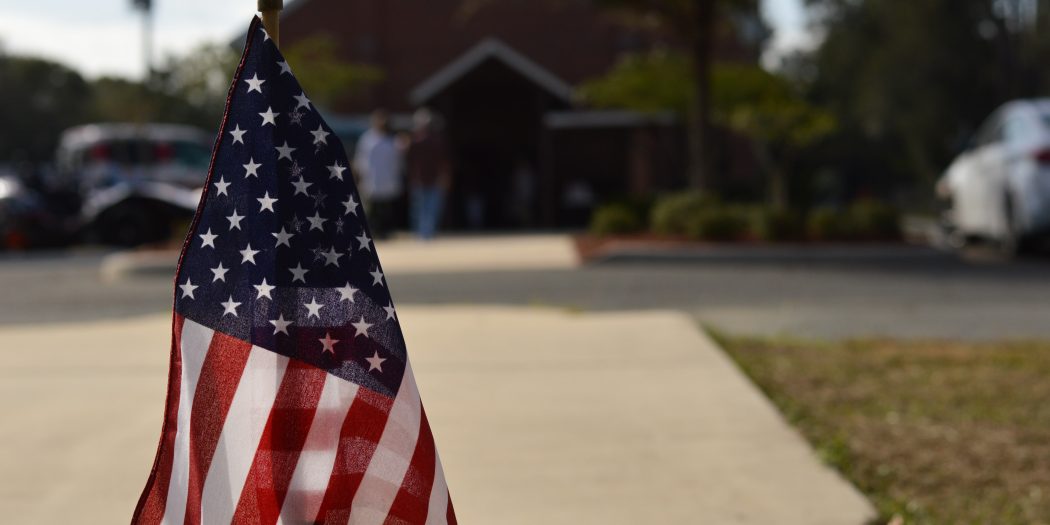 When retired Master Sgt. Christie Parker-Wheeler left the United States Air Force in 2014, her family decided that the hustle and bustle of Tampa’s big city life did not work for them.  They soon discovered Archer, Florida, a rural town about 15 miles southwest of Gainesville.

And the show of support this holiday weekend reminded Parker-Wheeler and other Archer veterans of the rich resources the community has to offer.

“It has a very strong veteran presence that we like,” she said.

As fourth grade students from Archer Elementary School led a crowd of Parker-Wheeler’s neighbors in a patriotic medley of songs this past weekend, she said that she could feel the support her community has for veterans.

Veterans make up 11.9 percent of the adult civilian population in Archer, according to the 2015 American Community Survey by the United States Census Bureau.  Archer’s percentage is about six percentage points higher than Gainesville’s 5.5 percent.

Archer and the surrounding area is home to numerous veteran-friendly resources such as the American Legion, Marine Corps League and Veterans of Foreign Wars, and its proximity to the Malcom Randall Veterans Affairs Medical Center in Gainesville.

Kenneth Curry is another veteran living in the Archer area. He also said that he finds the town to be a good community for veterans to call home.

“As I look around, I can detect a high respect for veterans in Archer,” he said.

Curry served active duty in the United States Army from 1978 until 1984. He moved to Archer in 2008 and is currently a minister with 33 years of experience.

“I think it’s a great place to live and raise families,” he said. “Archer being close to the VA hospital affords veterans great healthcare.”

Wheeler, who now works as a realtor with Parker-Wheeler, also noted the resources of the area.

“If you’re a veteran in this town, there is something and someone who can help you,” he said.  “This is a town full of resources for veterans. It’s just a matter of finding the right resources to put you in the right direction.”

One such local resource is Post 88 of American Veterans, otherwise known as AmVets.

Dean Richards, a local United States Army veteran who lives outside of Bronson, serves as post commander to the organization serving veterans living in Archer and Bronson.

AmVets’ mission is to “to enhance and safeguard the entitlements for all American Veterans” and “to improve the quality of life for them,” according to the national association’s website.

For Richards, serving other veterans through AmVets is personal.

He served in the military for just under 10 years, leaving the Army in 1994. As a soldier, he was part of Operation Just Cause in Panama, working to depose Manuel Noriega. He retired as a staff sergeant and began to transition back into civilian life. During this transition, he said that he began to struggle with anxiety and other social problems.

It was during this time that he found help through AmVets.

“When I walked into AmVets, I felt right at home,” Richards said. “There were people that had similar experiences or knew what I was talking about from past experiences, and they helped me and I was able to get past my issues.”

This help, he said, inspired his involvement with AmVets and assist other veterans facing similar issues.

“That was why I became a commander: in order to help people,” he said. “When you walk into AmVets, you’re with your brothers. We’ve all been in service. We all understand that.”

Richards said that this North Central Florida community is great for veterans, especially given the slower pace of the area and the support for veterans.

“I think a lot of veterans gravitate to the rural areas because it’s more comfortable for them,” he said. “There’s not as much hustle and bustle as there is in a city like Gainesville.”

“There is a serious disconnect with nature, and we are away from the hustle and bustle of the city,” Harvey said. “There’s something different about being outside and being engaged with nature.”

He said that Horses Helping Heroes works with the HONOR Center of the VA to help veterans and first responders. The program is available free of charge on Wednesdays from 1 – 2:30 p.m. or by private appointment.

Parker-Wheeler said that Veterans Day was a nice reminder of just how supportive the local community is for their brothers and sisters in service.

“It’s nice to look at our residents who are veterans,” she said, “to look at who they are and be proud of them and celebrate them.”

Dakota is a reporter for WUFT News who can be reached at 352-392-6397 or d.williams@ufl.edu.
@@dkwill123
Previous Balancing Babies And Bruises: Working Mom Finds Footing in Roller Derby
Next To Sell or Hold Out? Robbinswood’s Remaining Neighbors Weigh Options With New Development Pending