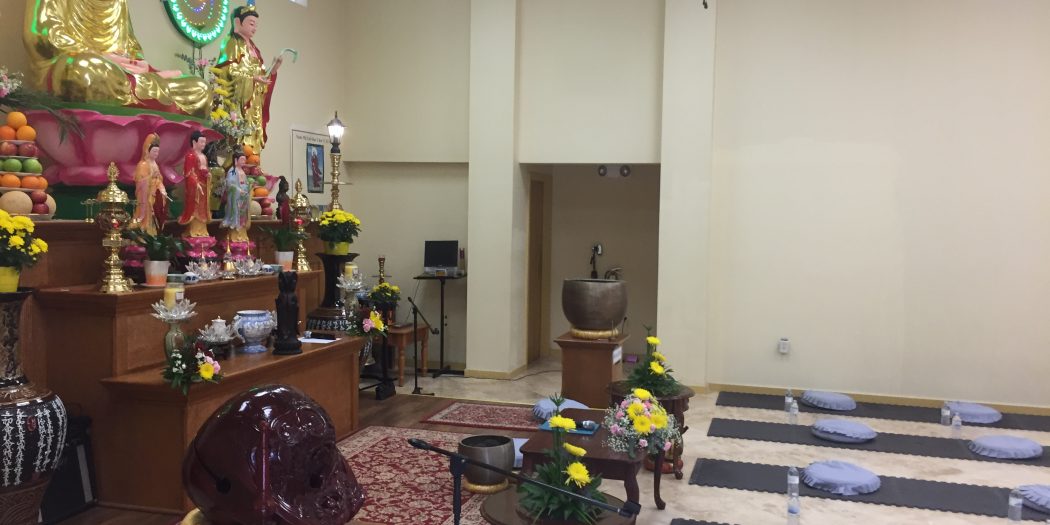 It’s a holiday weekend, and it’s not just Veterans Day.

Buddhist groups in Gainesville are celebrating their religious holiday Lhabab Duchen. On Lhabab Duchen, Buddhist communities open classes on meditation and virtuous actions. It’s on this day the Buddha brought his teaching back from heaven after his enlightenment. It’s the 22nd day of the ninth lunar month according to Tibetan calendar.

There is an increasing Buddhist participation in Gainesville. Buddhism starts with the teaching, and then the religion. Those who participate say it’s a supreme psychology. Sally Breedlove works for Alachua County Library and is a member of Karma Thugsum Choling.

“The teaching really resonated with me — the discussions — and it just seems like something kind of clicked because before that, I had tried going to church,” she said. “It never felt comfortable.

David Bole is KTC head monk and also known as the lama. He went to a Catholic school for 12 years. He then sees the one same entity in those who come to him for help or interests in Buddhism.

“The suffering, under that is their Buddha nature, which is clear awareness, uncontrived beliefs,” he said. “So the nature is like gold that we may dig out of the ground. It’s gold that may be encrusted with a bunch of junks, but the gold is the gold. There is no outsider. We’re all parts of the same family. I don’t try to turn people into Buddhists.”

KTC Director Jessica Miller recalled when she first dropped by with her neighbor for a meditation session.

“We were reading a book on Losang which was about taming the mind, which really helped me a lot cause I used to be a very angry person. So it helps me understand a little more about the responsibility that I have and how I interact with others.”

Vietnam veteran Tony Magnifico goes to the A Nan Temple. He says Buddhism and knowledge of karma help him with PTSD and other physical pains.

“In suffering, the joy is just part of life, the journey. The biggest, greatest part of that suffering is to get to help someone else one day,” Magnifico said.

Thich Duc Thong, the chief monk at A Nan temple, says he wishes more people come to visit the statutes and practice meditation. He also shares his future plan includes installing some stone tablets with translated Buddhist poems and literature on them.

University of Florida professor of Buddhist studies and Chinese religions Dr. Mario Poceski said it’s a distinctive religion. But he also explains why Buddhist groups don’t emphasize promotions: “If you look at the religions that most Americans subscribe to, it is very much other-oriented— the salvation comes from outside— and Buddhism is making some in-draws. Religious institutions often corrupt. But at the same time, we know of Buddhism because of their institutions, their temples and monks, so if you’re trying to reach, there is also the danger of losing your own identity.”

There are more activities and explorations than meditation. More than the three enormous Buddhist statues in A Nan Temple. Shambhala Sanga Coordinator Dr. Jan Snyder shares how her group has executed their goal of an enlightened society.

“One of our teachers goes regularly to the prison to teach meditation,” she said. “We used to have a correspondent with a person who would have a life sentence. He was in prison and he would correspond with us and ask for readings and, lots of time, we were feeling we could learn from him.”

A psychologist herself, Dr. Snyder says mindfulness practices help her in treatments and therapies.

Local North Central Florida group of psychologists just had a conference a couple of weeks ago on mindfulness, and I shared how my practice as a mindfulness practitioner has affected my role as a psychologist.

The Buddha suggested his followers to put all of his words to the test. Therefore, Dr. Poceski encouraged everyone to experience Buddhism through their own minds and souls.

Quan is a reporter at WUFT News who can be reached by emailing news@wuft.org or calling 352-392-6397.
Previous From Guns To Green Thumbs: Gardening Provides Therapy For Florida Vets
Next Florida Voices: Two Veterans on Veterans Day

For Raef Slim, the worst part is the rain. Slim moved to Gainesville from Lebanon …