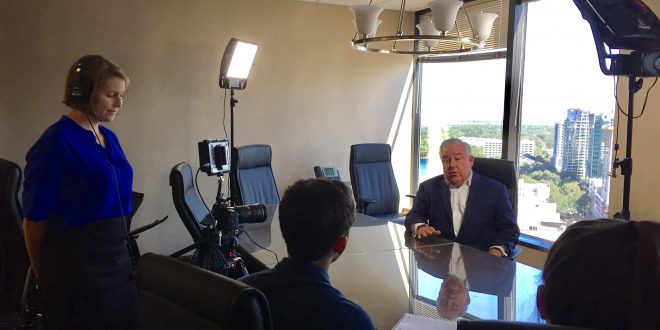 John Morgan On If He Runs For Governor: Raise Wages, Restore Voting Rights

John Morgan, founder of the Morgan & Morgan law firm, spent nearly $7 million to push Amendment 2 in 2014, which didn’t get enough votes statewide, and then again in 2016, when it finally did, legalizing medical marijuana.

Morgan is now considering running for governor in 2018. Reporters from WUFT News and the University of Florida Media Services recently sat down with Morgan in his Orlando office to discuss Amendment 2, his views on medical marijuana and his potential gubernatorial campaign.

What are your thoughts on the current state of medical marijuana here in Florida?

Well, I’m gratified that we are where we are. I’m a little unhappy … because the cards aren’t being processed fast enough. There’s a backlog of 50,000 patients who still don’t have their medical marijuana cards.

When I die, I guess my obituary will somehow mention medical marijuana in Florida.

No. 1, [2014] was an off-year election. Turnout was terrible for us. We lost by like a point and a half. Broward County and Dade County, they stayed home. Those were counties I really needed to do well. … I don’t think there was enthusiasm for the vote. I thought that enough young people could be inspired to come out and vote, and they did, but just not enough to get me the 60%. …

And so the argument was: This should be done legislatively. By the time we got back to the second round, my argument was: It’s never going to be done legislatively. If we don’t do it ourselves, who’s going to do it? And then I think finally, I changed a little bit of the language to get rid of things that I call red herrings, things that they could argue.

Are you running for governor, and how would that affect marijuana legislation?

I think I’d be a great governor because my whole career, my whole philanthropic world, has been to put people first. … So as a governor, I believe things like the minimum wage is woefully low. I believe that the reason people are so upset in life is because they go out and do all the right things and all the wrong outcomes come out.

You can’t live on $8 an hour. … That would probably be the main reason that I run. I believe that people who have served their time in jail that have paid their dues to society should have all their rights restored. … We’re supposed to be a forgiving society, but if somebody commits a felony, a nonviolent felony, and they never get their civil rights restored and they never get to vote again, I just think that’s wrong and unfair. …

What do you think is the best way for those in the media to portray marijuana to the public?

Well, I think they have to portray it as an alternative, the lesser of evils. Look, nobody wants anybody to be high or drunk, but if I could have opioids or marijuana, I want marijuana. … So what I would do in the media is I would talk about it being done responsibly and in lesser quantities. …

To me, it’s a much more civilized, mellow way to relax. To me, it seems a lot more civilized to smoke a joint and have a glass of wine than to do a bunch of red bull shots with vodka.

How do you view the relationship between the state level and the federal level as someone who might be in the position of governor?

So everybody is kind of in this limbo where you really don’t know, especially with [Donald] Trump as president. … But the real opportunity is going to be … these disrupters that come in and disrupt industry: the Airbnbs, and the Facebooks, and Googles, Uber and Lyft. These disrupters who come in and just charge in and do things.

That’s what’s happening in the marijuana industry. There’s going to be a fortune made because the big companies — the pharmaceutical companies, the tobacco and alcohol — they can’t get involved because it’s illegal federally. So you got these disrupters who are out there saying, ‘We’re going to roll the dice that the feds aren’t going to come in; we’re going to build it.’ And then one day, when it does happen, when it’s legal federally … then there’s going to be a huge fortune made by these early pioneers, these early disrupters.

Why do you think we haven’t seen any action as of now from Trump or [Attorney General Jeff] Sessions?

What I want to tell Trump is this … The best thing that he could do for his presidency would be to say that marijuana is no longer a Schedule 1 drug. It’s a Schedule 2 drug.

The reason that’s important to happen is because if it’s a Schedule 1 drug, it can’t really be studied in the universities. You can’t go over to [UF Health Shands Hospital] and study this because it’s illegal, and so it’s paradoxical. When I would be debating, people would be like, ‘There needs to be more study done before we go out and legalize it.’

Well, there can’t be any study done because it’s illegal. … Marijuana is a Schedule 1 drug. Cocaine is a Schedule 2 drug in America. … I think Trump would understand that’s wrong.

What do you think would be the social backlash, if there were one, if Trump and Sessions went after marijuana?

How did you get started in this?

I got started because I was invited to a lunch by a guy named Ben Pollara, and he came to me and he said, ‘I understand that you are in favor of medical marijuana,’ because I have a brother who’s quadriplegic who uses it for his pains and for his spasms. …

So Ben said, ‘Would you be willing to help us,’ and I said, ‘Yes.’ So I kind of signed on and I started putting money in … and then I barely lost [in 2014]. And losing, I take that very poorly. I give a speech called ‘failure is your friend,’ and if you take failure and just walk away from failure, then you’ve really lost.

But if you take failure and take the lessons from failure, then you can build your greatest successes. … I kept thinking to myself about when I’d give this speech ‘failure is your friend,’ and I’m like, ‘Do I really believe this?’ If I believe it, then I’ve got an opportunity to live it.

So what’s next? Where do we go from here?

It won’t be my fight for the legalization of marijuana. I think that will happen and I’m for it, but I will never go out and put my money to legalize recreational marijuana.

What I’m doing now is the same thing I did for marijuana, but for minimum wage. I want minimum wage on the ballot in 2020.

What do you say to people that look at the medical marijuana movement solely as a plot to legalize marijuana?

One thing is going to happen to all of us, by and large: We’re going to get sick, and we’re going to die. And for a lot of us, it’s going to be long, suffering and painful, and all I know is that I want it to be the least painful and the most bearable with as little anxiety as possible.

And if that happens to be through a plant, put in nature by God, for us, and it works, then I’m all for it.

Marielena Gonzalez is a reporter with WUFT News and can be reached at 305-308-7183.
Previous Afternoon News in 90: Nov. 8, 2018
Next ‘Rules Aren’t Being Enforced’: Neighborhood Near UF Fighting Against Partying