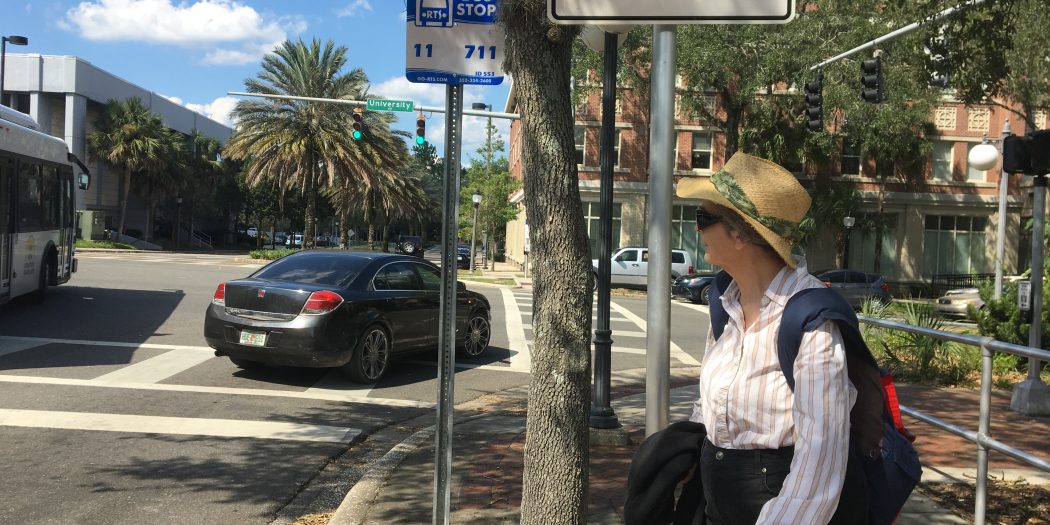 Roberta Morgan, artist, 63, waits for the bus to pick her up from the downtown Library. (WUFT/Samantha Sontag)

Gainesville recently investigated its bus system and auditors have found significant issues in the way the system operates, concluding in the final report that “there was no assurance that all revenues received for bus pass sales were deposited and reported.”

City auditors took on a five-month investigation to examine RTS operations over two years. They presented the 27-page document detailing the audit findings and recommendations on the Gainesville Regional Transit System to city leaders at a commission meeting Thursday.

After inspectors presented their report at the city commission meeting, silence infused the auditorium.

Commissioner Harvey Budd took his glasses off and held his forehead with his hands. He was the first one to speak up.

“It’s really disappointing that management couldn’t keep track of the cash,” he said. “I have never seen such a negative report about internal control. I’m really shocked.”

According to the audit, the investigation revealed RTS does not have “adequate” revenue collection processes. It also showed the organization does not have “effective” monitoring controls that ensured revenues were correct.

The Genfare system, a system designed to process bus passes, assigns a serial number to each ticket, according to the audit. But instead of using the Genfare reports for the number of bus passes printed, RTS staff at the Rosa Parks Downtown Station manually logged transactions on paper lists, which led to variances.

However, in the last three quarters of the fiscal year 2015, reported revenues exceeded Genfare-calculated revenue for passes by $47,560.

“I have no proof either way,” he said.

Auditors found the video equipment was not properly maintained. Some of the security cameras malfunctioned in the fare box room, which lead to at least 40 days of missing footage. Additionally, cameras were placed in a restricted manner that only showed the hands of the employees, instead of their faces.

RTS did not do periodic background checks for its cash-handling employees. The employees used the same log-on computer credentials to process passes, so auditors were unable to point to a specific person when accounting for the variances between the estimated and reported revenues.

This is the first time the organization has been officially inspected since 1997, said RTS Director Jesus Gomez. This means auditors can’t tell if the issues were going on for a month prior to their investigation or for as long as 20 years.

Holt, whom the city hired a little over two years ago, said he’s unsure why an investigation hadn’t been done for so long.

But Holt said he doesn’t believe Gomez knew about what was going on at his organization.

“I think he would’ve called for help,” Holt said.

Gomez told commissioners he has already started working on implementing about “90 percent” of the recommendations given by the auditors. However, he said RTS needs to hire new personnel, including an IT employee, a Genfare database manager and a customer service supervisor to implement all of them.

Auditors recommended RTS to work closely with the finance department to train its employees on how to manage cash receipts and to put in place supervisory reviews.

They also recommended the organization to restrict access to its physical facilities, after RTS card swipe logs data showed employees who didn’t necessarily need to enter the revenue room were granted access to it and actually accessed it at some point. The audit also showed some former employees still had access to RTS facilities.

Commissioner Budd echoed Holt’s sentiment in not pointing fingers at anyone for the poor management.

“I don’t blame anybody,” Budd said, “It’s about the system.”

At the meeting, Commissioner Harvey Ward said he was pleased auditors identified the problems at RTS, because that means they can be fixed.

“I am very pleased,” Ward said. “We’re on a path to have regular audits now.”