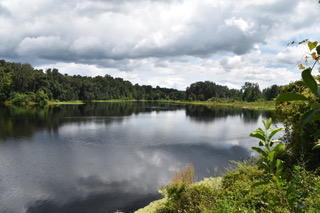 Flooding at Paynes Prairie (pictured) from Hurricane Irma has had positive effects on the area because of the natural rejuvenation flooding promotes. (Daphna Krause/WUFT News)

As drivers on Interstate 75 and U.S. 441 might have have noticed, flooding from Hurricane Irma is lingering at Paynes Prairie Preserve State Park. And as any longtime Floridian might know, flooding means more mosquitoes.

The city of Gainesville to the north of Paynes Prairie has organized mosquito control, but park officials don’t have any plans of their own to approach the insects, which would be there regardless of the flooding, said Amber Roux, a park services specialist at Paynes Prairie.

And the water that allows them to build their numbers is, overall, actually a natural rejuvenation for the environment, Roux said.

“The water is actually really good for the park, so from our perspective, no, we’re definitely not worried about the flooding,” she said. “We’re going to have mosquitoes here in the summer whether the prairie is flooded or not. Flooding itself is good for the ecosystem here. It’s great for the wildlife.”

Because the summer was consistently wet, the mosquito population has been steady and didn’t arrive in one large influx, which would be typical had Irma’s rainfall come instead after a dry period, Roux said.

But with colder days arriving, mosquito populations should be under control for now, Roux said.