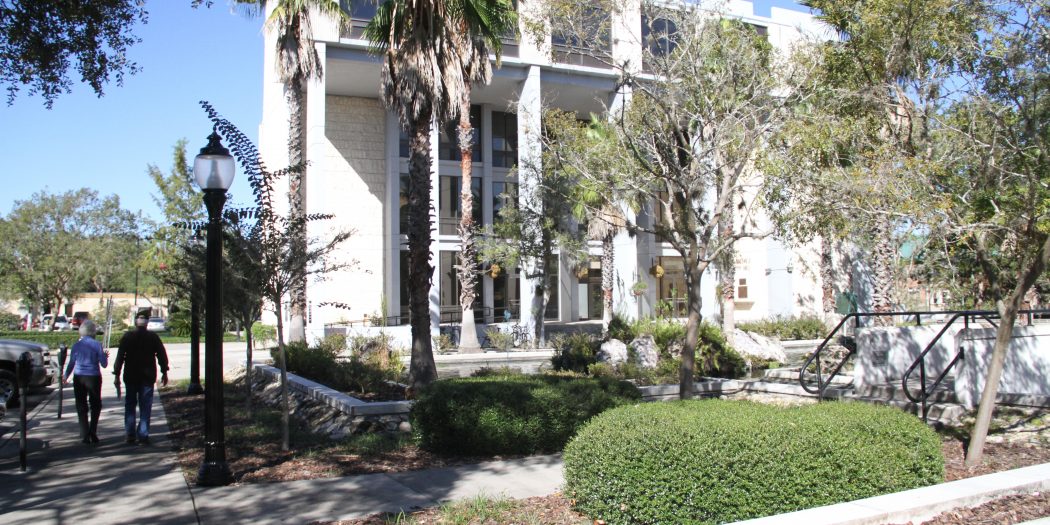 Gainesville City Hall, the location where the meeting about undergrounding power lines was held on Thursday. (Justin Ford/ WUFT)

Gainesville city commissioners met Thursday with a representative from Gainesville Regional Utilities to discuss the possibility of a massive infrastructure project: the transfer of a significant amount of overhead power lines underground.

The meeting with city commissioners and Mayor Lauren Poe addressed the initiative of “undergrounding,” which refers to relocating power lines currently on overhead utility poles to below ground.  The commission discussed whether or not the city should go beyond the current requirement of undergrounding power lines for all new developments.

“It is not practical or economical,” Goston said. “If it was a necessity you should do it. But for cosmetic purposes, there is no way.”

Commissioners have been discussing undergrounding initiatives since August 2016. The reasons for revisiting the idea varied among commissioners and ranged from beautification to storm preparedness.

Mathews explained that overhead wire can be bought for considerably smaller price, at approximately $1.50 per foot. “The same wire that has to be underground is close to eighteen dollars a foot,” he added.

Mayor Lauren Poe highlighted the benefits of underground wiring at the meeting. He said that overhead lines are damaged much more frequently because of the outside environment and that cost supersedes the cost of the underground wiring.

In response, Mathews mentioned another disadvantage of undergrounding, saying that underground cable has a lifespan of approximately 30 years, whereas the infrastructure of overhead cable can last anywhere between 50 and 100 years, depending on the material of the pole.

Commissioner Adrian Hayes-Santos argued that the GRU presentation was one-sided and that future presentations on undergrounding should show “both sides of an issue.”

Mathews, however, mentioned that GRU does not have the budget to transfer large amounts of overhead infrastructure underground.

“The way the ordinance reads, the customer – whoever wants it (electric underground systems) – pays for it,” Mathews said. “It is not in our rate structure.”

GRU referenced Tallahassee as a model for rate pressure should Gainesville go forth with such undergrounding initiatives. According to the GRU presentation, a mostly underground electric system could cause a minimum 20 percent rate increase for 50 years.

Commissioner At-Large Helen Warren said Hayes-Santos was looking at the positives that undergrounding provides in the wake of storms such as Hurricane Irma.

“With the hurricane damage, less power was knocked down in neighborhoods that had underground infrastructure,” Warren said.

Moving forward, the commissioners and mayor in attendance voted to revisit the pros and cons of undergrounding. Staff from GRU said future presentations will be more balanced.

Justin Ford is a reporter for WUFT news and can be reached at 561-809-2670, and by email at justin.samuel.ford@gmail.com.
@@Justinian_Ford
Previous Marion County Commission Approves Equine Project
Next Bacteria In Local Creeks Pose Safety Risks