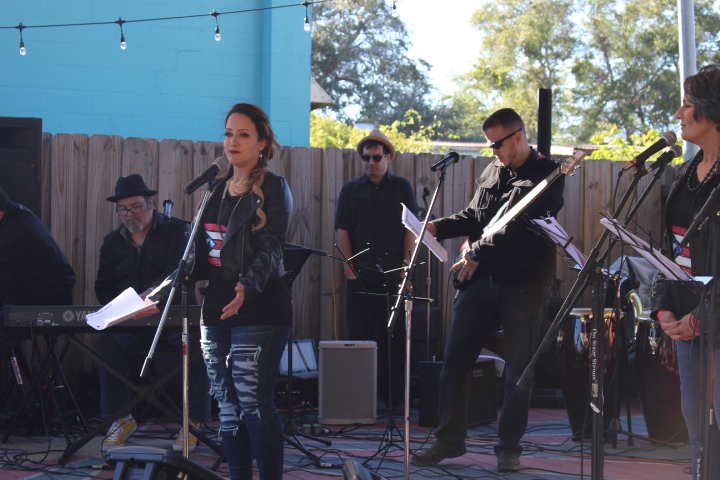 Tropix female lead singer Laura Cabrera speaks to the crowd and thanks everyone for coming out to support the people of Puerto Rico. (WUFT News/Summer Jarro)

Even though Hurricane Maria hit Puerto Rico over a month ago causing massive destruction, many Puerto Ricans are still dealing with problems on the island from the storm.

Carla Rodriguez-Caro, a member of the nonprofit organization PResente, moved to Gainesville from Mayaguez, Puerto Rico, five years ago and her family living on the island was affected by the hurricane and is still dealing with the consequences.

“I actually wasn’t able to get a hold of them until the sixth day after the hurricane,” Rodriguez-Caro said. “They lost power and they lost water and they got a little damage in the back part of the house but … my family at least was one of the lucky ones. They didn’t have any flooding in their house or anything like that. … They were okay, but after that they spent 36 days without electricity and 15 days without water.”

On Sunday, Oct. 29, PResente and music group Tropix hosted a benefit concert to help hurricane victims still being affected in Puerto Rico. Rodriguez-Caro came up with the idea and was the event organizer.

She was looking for a band to perform and heard lead singer Laura Cabrera of Tropix also wanted to do something to help victims on the island. Cabrera had several family members and friends in Puerto Rico who were also impacted by the storm. Both groups collaborated together to host the event. Tropix was responsible for the music and PResente organized the event logistics, Rodriguez-Caro said.

The event was created to spread the word about the situation in Puerto Rico, let people know the problem is still there and raise money to donate community water filters and solar lights to the hardest hit areas in central Puerto Rico. PResente has already bought one filter and they are working with the organization Casa Pueblo to distribute the solar lights, Rodriguez-Caro said.

“PResente is a nonprofit organization that was created first and foremost to support the education in Puerto Rico and self-sustainability, but after the hurricane happened, most of our initiatives are now focused on hurricane relief,” Rodriguez-Caro said. “It’s made out of Puerto Ricans in the US mainland in order for us to be able to support Puerto Rico.”

The event was held from 3 p.m. to 8 p.m. at First Magnitude Brewing Company and included live entertainment from Tropix and 5 Notas featuring collaborations with other musicians such as Manolo Mongil, Elio Piedra, Merlyn Corona and Christopher Charters.

There was a silent auction with 29 items on display from different sponsors, free salsa lessons given by the dance studio Salsa Mundial Gainesville and food from Latin American Fusion Food Truck. Tickets were $20 during presale and $25 at the door. Anyone under 13 could donate as much as they wanted or could enter free.

One hundred percent of the proceeds from the tickets and the silent auction and 10 percent of the money raised from Latin American Fusion Food Truck during the event went toward PResente’s initiative of donating water filters and solar lights to Puerto Rico, Rodriguez-Caro said.

“It’s a necessary thing,” said Ben Guzman, event coordinator at First Magnitude Brewing Company. “Someone needs to raise money for Puerto Rico. The hurricane has ravaged the island (and) still tons of people (are) without power. They need relief and there’s a community here of people who are interested in helping out.”

About 600 people of all ages attended the benefit concert, Rodriguez-Caro said.

“We have been amazed and humbled by the outgoing support,” Cabrera said at the event while on stage before performing with Tropix. “… We really want today to be a tribute of our island. A tribute of our people.”

Attendee Nancy Jordan is not Puerto Rican but knows many people from there. “I want to support the people (and) the island,” Jordan said, when asked why she came to the event.

Marisol Cosme attended the event because she is Puerto Rican and has family on both her mother and father’s side living on the island in the city of Guánica. They were directly impacted by the hurricane and “are not doing well,” Cosme said.

“It’s a good thing to raise money and to help people who are suffering,” she said. “… In Puerto Rico not much has changed since the hurricane. They still don’t have water, they still don’t have electricity and they live that on a daily basis. … Every little bit that we can do from here helps…”

Esther Caro, Carla’s mother, also came to the event from Puerto Rico to surprise her daughter and support the organization. Caro thinks it is great seeing so many people come out to support the victims of the hurricane.

The situation in Puerto Rico has slowly gotten better, but it is something that nobody thought would ever happen. Hurricane Maria showed people how unprepared they were, Caro said.

“One of the things that has helped us a lot … has been the answer from all these people outside of Puerto Rico that still think about the island,” Caro said. “The young people that we have outside of Puerto Rico … have been very meaningful in sending the message to the government ‘if you don’t do your work, we are going to take care of our people.’ So that has been very wonderful.”

The benefit concert raised $17,323. This amount included the money raised from the tickets sold, the silent auction, 10 percent of the money made from Latin American Fusion Food Truck and five sponsor checks that were donated, two of them given to Tropix, Rodriguez-Caro said.

“It was amazing,” Caro said, when asked how the event went. “The event was a complete success. … The silent auction was amazing. Everyone bought everything; everyone had a lot of fun. I could see everyone enjoyed it.”