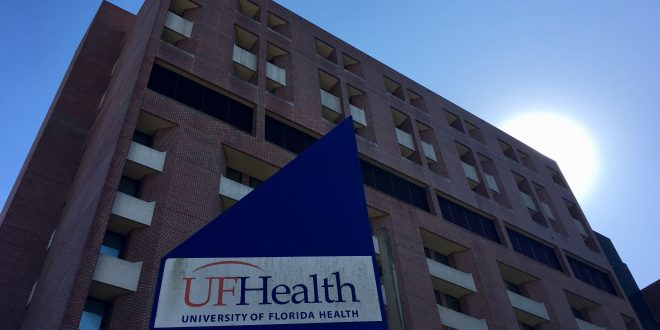 University of Florida Health's pediatrics building on Wednesday. UF Health doctors have begun a new study looking at the health effects of marijuana on people with HIV, including its potential as an alternative to addictive opioids. (Lexie Miller/WUFT News)

University of Florida Health doctors have begun a new study looking at the health effects of marijuana on people with HIV, including its potential as an alternative to addictive opioids.

The doctors will be monitoring the patients and their marijuana use. They will be exploring both negative and positive effects of using cannabis as medicine, said Dr. Robert Cook, the study’s lead investigator.

Many HIV patients take the drug to help with sleep, pain and stress, Cook said.

The study is scheduled to go for the next five years and is being paid for by a recently announced $3.2 million grant from the National Institute on Drug Abuse, he said. UF Health researchers applied for the grant twice before receiving it.

Marijuana is legal for people with HIV/AIDS in Florida. Other Southern states — Georgia, Kentucky, Mississippi and South Carolina — have medical marijuana laws, but they don’t include HIV/AIDS as a condition that would qualify for use of the drug.

The researchers will be studying patients only in Florida. They won’t be providing the marijuana, which must have already been obtained by the patient, and they won’t ask whether the patient got the marijuana illegally or through a prescription.

“Not many people have it with a prescription yet, so we will also be looking at if there is a difference between the prescription marijuana and what people get off the street,” Cook said.

On researching possible negatives, Cook said the worry is “about addiction and the stereotypical side effects.”

Side effects could be addiction, sleepiness, laziness and intoxication. These could cause problems for patients who have a job that involves driving or the use of machinery, Cook said.

Another reason Cook said he wanted to conduct the study is to see if there is an alternative to giving patients opioid pain killers. These can be especially addictive when prescribed, so many physicians are looking for alternative prescriptions for people who are HIV positive, he said.

The study will hopefully bring about more information that is not yet available to physicians about medical marijuana, Cook said.