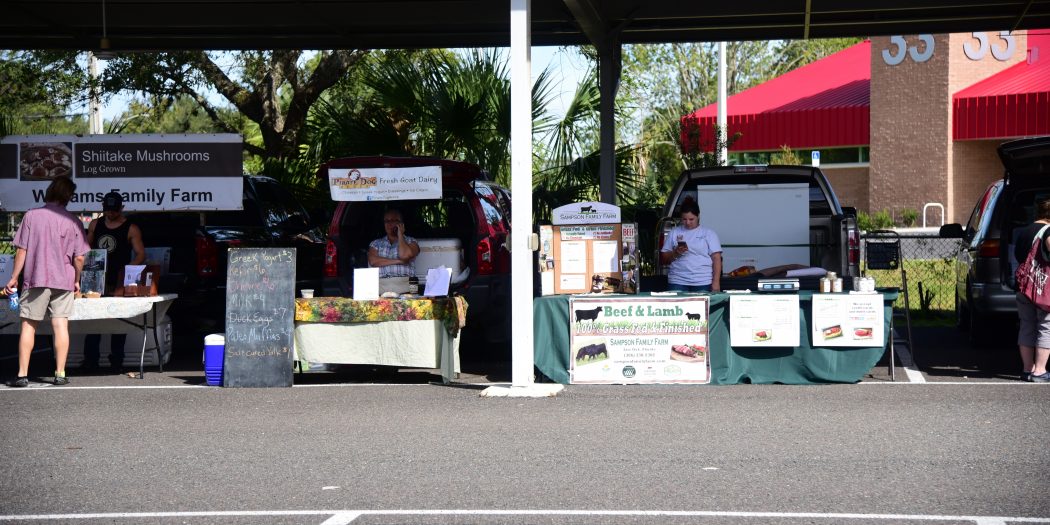 The ACFM, located at 5920 NW 13th St. and open Saturdays from 8:30 a.m. to 1 p.m., has an annual lease with the county, which expired Oct. 1, said County Commissioner Lee Pinkoson. The lease has been extended to Nov. 30., and Pinkoson said the ACFM board members and the county attorney have until then to alter the language and draft up a new policy for review.

In August, when the original lease renegotiation was proposed for solicitors and petitioners to have “free and unfettered access to all common areas of the premises,” ACFM treasurer Greg
Yurish said he and the other board members knew it wasn’t going to work. With unregulated access, he said they were worried it would take away business from sellers while disturbing
shoppers and ultimately driving them away.

“It’s not going to make the vendors happy, and it’s not going to make the customers happy,” he said. Yurish, co-owner of Glades Ridge Goat Dairy and a vendor of the farmers’ market since 2009, said he hasn’t noticed any issues from petitioners or solicitors. If anyone tried to come inside the gated area for purposes of collecting signatures or other related reasons, Yurish said they were
simply asked to resume the activity outside of the gate at one of the entrances.

“Most people don’t have any issues,” he said.

“One person I guess came in, and they made a disruption, and I guess they complained that they were told to go outside, and they complained to the city,” ACFM board member Robin Popp
said.  Popp, co-owner of Laughing Chicken Farm, said she’s concerned for what this change could mean for the ACFM, especially considering how crowded it can get depending on the time of
year. Additionally, vendors are charged either a daily or annual fee for the space they use, and each seller gets inspected and has certain regulations to adhere to. “We pay here, we coexist here, there are rules here,” she said. “How can that apply to someone who is bringing a petition in and bringing away the attention of the customers?”

Stefanie Hamblen, a food writer and owner of Hogtown HomeGrown, has been customer of the ACFM for nearly 30 years. She said from a shopper’s perspective, she wouldn’t want to feel like
she’s “running a gauntlet to avoid people” while there. “I wish all the commissioners would come out and shop at the farmers’ market and see what it’s
like and see what the atmosphere is like,” Hamblen said.

Pinkoson said he and the other board members understand the concerns of vendors and shoppers.

“Some people don’t mind signing petitions and talking politics. Other people, that’s not what they come for, and they consider it kind of nuisance,” Pinkoson said. “The county commission
didn’t want to interfere with the ACFM ability to make money.”

The ACFM is on county property, so Yurish said commissioners can write the lease however they want. But during the discussion on Oct. 10, Yurish said he could tell that commissioners
“really listened” to the ACFM members, and that all parties want to work towards a common goal – compromise.  The ACFM board members have been allowed to propose designated areas for solicitors and strike language from the original document if they felt it wouldn’t work for the market, Yurish said. They are also able to develop a Solicitor Conduct Policy, which Yurish said would
resemble the ACFM vendor’s code of conduct, including restrictions like remaining in a designated space and no actively trying to engage a customer as they speak with another vendor.

“If they’re disruptive to our business, we can ask them to leave,” he said. “People are not just exercising their First Amendment rights – some people are paid. Those are the people that are
going to be a little more aggressive in seeking signatures.” Though the nature of the activity will vary, Pinkoson said the petitioning and soliciting referred to may include community events, such as blood drives, or someone requesting signatures to get an initiative or political candidate on the ballot. And while the nature of the specific activity varies, some individuals may be paid to collect signatures, Pinkoson added.

The tentative agreement will allow petitioners and solicitors access to some space inside the market’s gates that isn’t reserved for vendors. However, those who have paid dues to the market
will take precedence, Pinkoson said, and petitioners and solicitors will be expected to respect the business of the ACFM.
Upon finalization and implementation next month of the ACFM’s new annual lease, Pinkoson said he and the other commissioners told the ACFM members that they can share how the
experience over the next year goes. “If it does present a problem, they have the ability to come back and tell us,” he said.

Regardless of the issues from the initial proposal, Popp said she thinks this is something both parties can benefit from, so long as each side is permitted a say. “I think we can share it,” she said. “I just think there needs to be some boundaries.”

Cameron is a reporter for WUFT News and can be contacted by calling 850-207-0517 or emailing cameronacobb5@gmail.com.
@cameronacobb5
Previous In Photos: Gainesville’s Annual Pride Festival
Next In Photos: UF Equestrian Team Starts Show Season