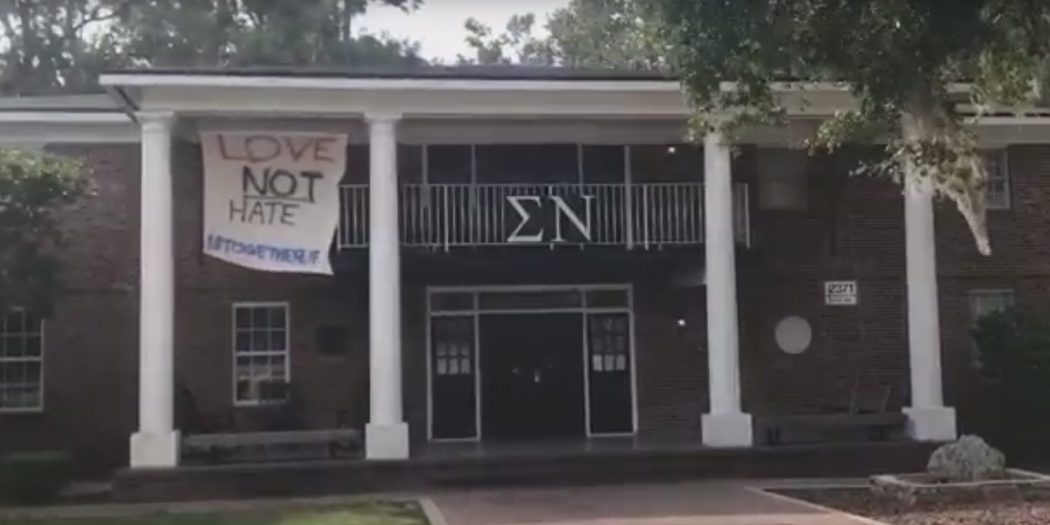 Sororities and fraternities at the University of Florida are taking measures to prepare for the Thursday event on campus and combat hate speech.

Both organizations are encouraging sorority and fraternity chapters to hang banners with the words “Love Not Hate #TogetherUF” in front of their houses.

“The IFC has always been extremely inclusive, and Richard Spencer stands for the opposite of that,” Heller said. “We wanted to raise these banners as a symbol of unity and also a renouncement of his rhetoric.”

All banners will be raised by Wednesday in preparation for his Thursday speech at UF.

Heller said IFC and Panhellenic wanted to host an alternative event during Spencer’s speech, but because Gov. Rick Scott declared a state of emergency, the organizations wanted everyone to stay within the safety of chapter houses and homes.

“Our chapter presidents were excited all across the board to participate in this and work with President Fuchs, and it was a great effort between both councils,” said Jake Dube, president of IFC.

Many organizations are hosting alternative events at the same time as Spencer’s speech as a form of civil protest against his message and the National Policy Institute.

Director of sorority and fraternity affairs Jack Causseaux said in an email to all chapter presidents that a new UF website, freespeech.ufl.edu, was launched to “provide information about free speech and controversial speakers as well as answers to questions” about the event.

Causseaux said students are participating in a series of events that promote dialogue, education and the sense of community during the event, all tied together with the hashtag #TogetherUF.

This includes a virtual assembly that students will be able to log into at the same time of Spencer’s event, Causseaux said.

Panhellenic and IFC will also be providing an open floor on Thursday so people can voice their opinions and feelings about Spencer and his ideology.

“We will be home ignoring his hate speech and providing a forum for any member of the IFC or Panhellenic communities to speak their feelings on this week’s social climate and of other issues important to them,” said Heller.

Dube said that all the chapter presidents were excited to participate in this campaign and work with President Kent Fuchs.

“It was a great effort between both councils,” he said.

Capt. Jeff Holcomb, the Community Service Division Commander for the University of Florida Police Department, said that more officers than usual are going to be on campus on Thursday looking for suspicious activity related to the event. However, he said UFPD will be operating regularly and responding to normal calls.

His primary advice to students this week is to follow any instruction given by law enforcement in order to facilitate effective control over any situation that may arise.

Giulana Kissel, Panhellenic delegate for Alpha Omicron Pi sorority, said that the campaign was another effort put forth to show that UF did not stand in solidarity with Spencer’s ideas.

“I think we did this just to make it known that by no means do we agree with anything he believes in,” said Kissel. “I think the best way to combat his message is by putting it out there that we don’t agree and simply not give him the attention we all know he wants.”

Previous Protesters Demand Change Ahead Of Spencer Visit
Next Oct. 17, 2017: Afternoon News in 90