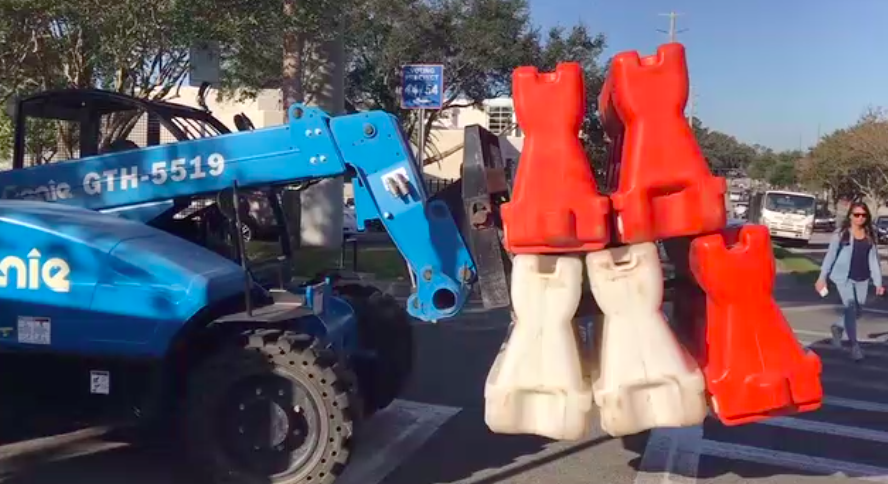 Barricades are being installed in Gainesville, as Richard SPencer plans to speak on campus this Thursday (WUFT/Janae Muchmore)

The National Policy Institute has taken matters into its own hands after several local businesses attempted to reduce attendance to Richard Spencer’s speech Thursday.

NPI initially choose for the University of Florida to distribute tickets Saturday at the Philips Center.  But after Cameron Padgett, an organizer of the event, and NPI caught wind of local organizations and businesses intent to encourage locals to get tickets and not show up, they asked for full control.

“Our friends on UF campus and friends around the area saw advertisements to turn in tickets for free beer, but also sell tickets for money and just burn them,” Padgett said.  “That’s kind of why we changed the way it was going to be done.”

Of the 800 tickets reserved for Thursday’s event, Padgett received 700 of them in the mail Monday morning.  He says supporters have already been contacting him with a request for tickets.

“I’ve had people reach out to me that’s already wanted tickets so, you know, I’ll give them the tickets as we go,” Padgett said.

Although the distribution process has already begun, Padgett expects tickets to still be available the day of for local students and residents interested in attending.  There remain uncertainties about how that process will work as the NPI continues to communicate closely with local law enforcement.

While the exact location for tickets distributed Thursday before the event is unknown,  UF spokesperson Janine Sikes says it will be done in close proximity to Hull Road and the Philips Center.  Then, attendees will be able to enter through a designated path that starts behind the Harn Museum of Art and directs people between the Harn and Museum of Natural History.

This is just one of the safety precautions the University is taking as it prepares for Thursday.

“I think you will start to notice an increase in security during the next few days,” Sikes said. “We’re concerned with clashes between people with different ideologies.”
Sikes said UF will allow protesters to exercise their first amendment right to peacefully protest in the staged protest area, which will be located within the Cultural Plaza parking lot.

Previous Newell Hall Provides UF Students 24/7 Study Space, Some Questions Yet To Be Answered
Next Oct. 17, 2017: Morning News In 90