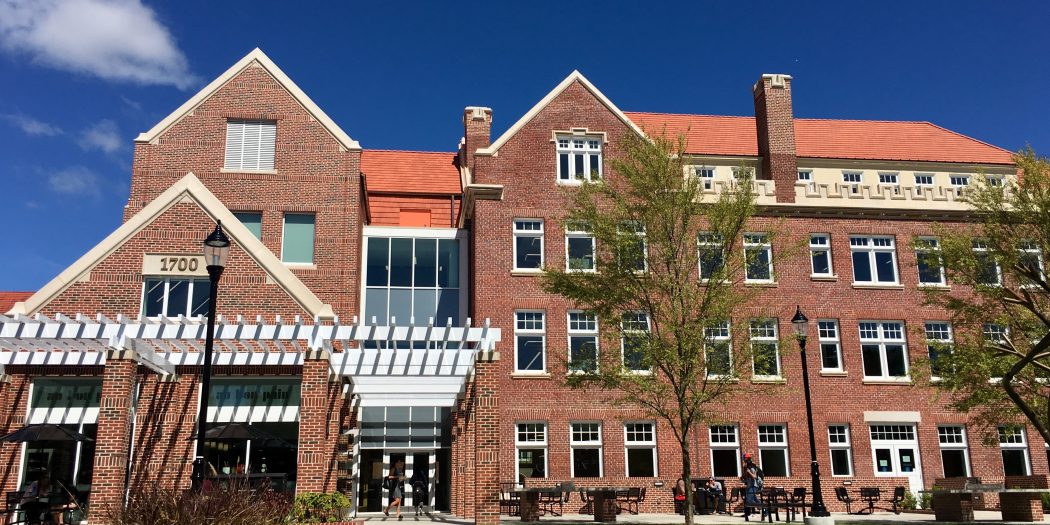 Newell Hall Provides UF Students 24/7 Study Space, Some Questions Yet To Be Answered

After five years of planning, lobbying and renovating, Newell Hall Learning Commons opened its doors to the University of Florida students on April 17. Now it serves as the only study space on campus that is open 24 hours a day and seven days a week.

Newell Hall is open from 6 a.m. to 6 p.m. and accessible with a Gator1 ID card from 6 p.m. to 6 a.m., except for home football game days. The space does not look like a typical library; it has conventional desks but also pod-shaped chairs, cushioned benches and wide stairs for students to choose from.

For some students, those varied seating options are the factor that differentiates Newell Hall from other study spaces on campus. Xuan Yang, a senior food and resource economics student, said he studies in there three times per week.

“I come here because the chairs are comfortable,” Yang said.

He added that Newell Hall is a cleaner and better studying environment compared to libraries on campus – there is less distraction from the noise of people chatting because the seats are more spread out, he said.

That distance is another factor that draws students to Newell Hall rather than the library.

Hinani said she comes to study at Newell Hall about once a week. Since it is the only study space on campus open 24/7 on the weekends, it is one of her remaining options. The game day closures inconvenience her, she said, because she needs a quiet place to study even during a football game.

The purpose of renovating Newell Hall into a learning center was to provide additional study space on campus, said Blake Murphy, former chair of the Newell Hall Student Advisory Board.

The student government was able to decide how to use the space because they lobbied for the funds from the Florida legislature, Murphy said. They received $10 million in capital outlay from the state, $5 million from the University of Florida and $1.5 million from Aramark.

Every two years, UF sends out their Student Experience in the Research University survey to the student body to determine how the university can improve itself, Murphy said. It asks questions about inhibitors to success and problems that students face.

Above anything else, students responded that they needed more locations where they could study on campus, he said.

“This is what students said their No. 1 priority was,” Murphy said.

However, Murphy said that student government was not entirely successful in this initiative. Since Newell Hall opened, Library West reduced its hours from 24/7 to 24/5 with limited weekend hours.

“I don’t know that we succeeded in our goal of providing more study space on campus,” he said.

Since Newell Hall has become the only study space on campus that is open 24/7, it does not provide additional study space, he said. The new learning center has replaced the library as the 24/7 option, making it a different, not an additional option.

“I’m excited, I’m happy that we have a new study space on campus,” Murphy added.

“Tuition is supposed to pay for the things on campus that you expect a university to provide,” he said. “I believe student fees should pay for things that go above and beyond that.”

Murphy said that access to a library is the sort of things students should expect their university to provide with their tuition money. The innovations of Newell Hall, however, are supplementary, and student government should pay for that to remain open.

“My hope is that the current board and the current student government administration are able to finally fulfill the vision of the project,” Murphy said.

The advisory board had many goals for the renovation of Newell Hall, some of which seemed to conflict, said Howard Ferguson, the renovation’s project manager.

“It’s a series of tradeoffs and compromises,” Ferguson said. “We couldn’t hit every single sustainability goal.”

During the construction project, the team needed to make sacrifices to stay within budget and adhere to restoration guidelines.

Newell Hall, built in 1910, is on the National Register of Historic Places. Therefore, there are regulations that ensure historic preservation and restrict repurposing, he said.

Additionally, the price of contracting was higher than estimated at the time of bidding, so the project required about $2.5 million in additional funds, Ferguson said. Various departments at UF, including student government, Tigert, the Physical Plant and Aramark provided additional funds.

Even with these obstacles, the renovation team exceeded most of its goals, Ferguson said. Where they could not meet the goal entirely, they came close.

The renovations are complete, but student government is still determining how best to use the learning center at Newell Hall, a space designed specifically for students to study and collaborate. On Wednesday, Student Body President Smith Meyers sent out a survey to students asking for their opinions about the current hours for study spaces on campus.

Through this survey, Meyers said he learned that Newell Hall is not open on game days. He said he is currently working with the dean of students to grant students access to Newell Hall on game days with the swipe of their Gator1 ID cards.

Overall, Meyers said he is happy with the result of the renovation because it is a building unlike any other at UF.

It has been a success with students, he said. In the first 77 days after Newell Hall’s opening, there were 171,000 visits to the building.

As for future changes to the building, Meyers said student government will send out more surveys at the end of spring semester, after about a year since the learning center opened. Then, they will make decisions based on students’ requests.

“We’re excited to gather feedback from the students,” Meyers said.

Jessica is a reporter for WUFT News and a third-year journalism and political science student at the University of Florida. She grew up in Atlantic Beach, Florida with an appetite for storytelling. Reach her by emailing j.fondo@ufl.edu.
@jess3mf
Previous Oct.16, 2017: Afternoon News In 90
Next National Policy Institute Takes Over Ticket Distribution For Richard Spencer