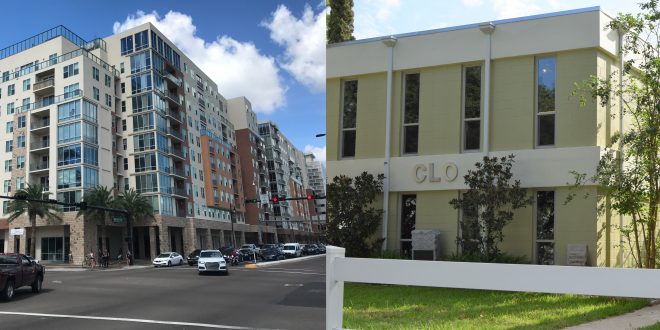 The Standard (left) and the Cooperative Living Community. Markedly divergent in price and amenities, these housing complexes near the University of Florida are part of the old-versus-new building shift happening along the periphery of the University of Florida, the state's top public university but one that attracts students from all socioeconomic classes. (Isabella Sorresso/WUFT News)

‘Above My Means’: Housing Near UF Swings Up In Rent, Amenities

When Irfan Kovankaya pulled into the parking garage of his new apartment complex in August, one of the first things he noticed was an abundance of nice cars.

“I looked around, and I saw like four Mercedes Benzes in literally four minutes,” said Kovankaya, a resident at The Standard, the just-built high-rise complex across from the University of Florida.

“Then I saw like 15 million Mustangs, and as I was driving in my Toyota RAV4, my mom was like, ‘These cars are all nicer than my car and every car I’ll probably ever own.’”

The 20-year-old political science student at UF and his four roommates pay about $720 a month each, or $3,600 for the whole unit. Meanwhile, a one-bedroom is $1,425 a month, and the more expensive of the two six-bedroom floor plans is $805 per room monthly (or $4,830 for the whole unit if it’s at capacity), according to the apartment listing website Swamp Rentals, though The Standard’s listing was been removed sometime in the past few days.

In front of these prices, The Standard advertises itself as luxury apartments with extensive amenities — some of which, like access to one of the two rooftop pools, costs renters an additional monthly fee.

“When people find out I live at The Standard, they’re usually like, ‘Oh my god, that’s so cool!’ and immediately like, ‘Can I come?'” Kovankaya said.

One block from The Standard, at the Cooperative Living Community complex, Dorche Dickerson prepares to start bathroom detail by gathering cleaning supplies and filling a bucket with soapy water.

Meant to help keep rent affordable, chores are part of the arrangement between the complex — known as the CLO (pronounced “Clowe”) — and its tenants.

Dickerson, an architecture student at UF, doesn’t mind the work: She has lived there for two years on a $400-a-month rent and doesn’t plan on leaving anytime soon.

Along with price and location (a block away from UF), she and the other CLO tenants get another perk: two chef-prepared meals in the cafeteria on weekdays. And the only fees they might face are ones of $10 to $40 for missing assigned chores.

“I basically just Googled cheap housing in Gainesville,” Dickerson said of finding the CLO. “It popped up, and I was pretty happy with the price. When I looked into it, they had parking and food included, and that’s what made it really interesting.”

These two nearby complexes — one a fresh, glitzy citadel of high living and high rent, the other a 86-year-old compound of communal chores and meals — sit in key blocks amid the old-versus-new shift in housing and other buildings happening along the periphery of UF, the state’s top public university but one that attracts students from all socioeconomic classes.

On one end are the more viable options, like the CLO, for low-income students. On the other are new places like The Standard, Social 28 (per-person prices: $679 in a four-bedroom to $949 in a two-bedroom), The Retreat ($654 per person in a six-bedroom, six-bath, or $3,924 for an at-capacity unit) and incoming complex The Nine — all chalked prices but also with perks.

The Standard was built on what was most recently a vacant lot, Social 28 where a parking garage stood, and The Retreat on the site of the more affordable Sun Key Apartments, which were built in the 1960s.

The Nine, which is expecting to welcome its first residents for the fall 2018 semester, is being constructed along Southwest 13th Street on what was the site of the India Cultural and Education Center.

Along with a pool, its amenities will include a luxury spa and bowling alley.

But these complexes popping up is not necessarily a sign of student gentrification, said Ruth Steiner, an urban and regional planning professor at UF and director of its Center for Health and the Built Environment. Instead, they’re just part of Gainesville’s growth.

In fact, The Standard presents the opportunity for students to live close to the university while also not owning a car, she said.

“The Standard is bringing students in where they ought to have been brought in 20 years ago, as far as I’m concerned,” Steiner said. “Instead of building student housing on Southwest 34th [Street] and Williston and all that area down by Butler Plaza, we could have been building northeast of campus with much lower impact.”

High rental costs for new housing near the university is no surprise, she said.

“When you build, it’s more expensive because it has greater value,” Steiner said. “It’s newer, it’s less likely to break down — all of those things. Whereas as things age, they lose their best looks, and they filter down to people who can afford less.”

Kovankaya said he’s feeling the financial pressure from that greater value at The Standard and plans to live elsewhere next year.

“I already live above my means,” he said. “I can’t live here another year.”

The perks of new

Another UF housing option is, of course, on-campus dorms and apartments. Unlike the set-in-stone monthly rent of the private complexes, housing here has payment plans in place to prevent students from entering into perhaps the worst of housing situations: not having one at all, said Todd Marrone, associate director of housing for public and governmental relations.

“The resident with the inability to pay would be referred to housing to set up a housing agreement in order for them to be successful and focus on their academics rather than money,” he said.

UF has other programs to assist low-income students, like an on-campus food pantry, but one thing that isn’t available is free dorm housing, Morrone said.

Though some were worried The Standard might not have been prepared by the start of school, everything was ready for move-in, except most of the amenities, Kovankaya said. The only amenity open right now is the VIP pool (a second rooftop pool, for all residents, is being finished).

The VIP pool was briefly available to all residents at the beginning of the semester, but since then, the doors have been locked from all non-VIP residents, Kovankaya said. (VIPs are those living on the ninth and 10th floors, and the classification costs $40 extra each month.)

Other Standard amenities yet to be finished are a clubhouse, racquetball courts and the second pool.

That pool is expected to be complete by the end of October, The Standard’s public-relations firm, Jackson Spalding, wrote in an email. The clubhouse is set for late November, and the racquetball courts for mid-December.

Kovankaya also mentioned a game room and a study lounge not yet being opened, but it wasn’t immediately clear if those are considered part of the clubhouse.

Regardless, the complex seems to have grabbed a great deal of popularity.

“The Standard at Gainesville was pre-leased 100% months before the official move-in date,” the email from Jackson Spalding said. “We’re just now sharing information with current residents about lease renewals, and we’ve already seen a strong response.”

One resident who said she’s ready to re-sign is non-VIP Jillian Stern.

“I love my apartment and the location of the building,” the 20-year-old UF history student said, “so I’d say [it has been] mostly a positive experience.”

Stern said her rent is $815 a month, not including the $150 monthly fee to park her car at the massive garage in the rear of the complex. But in the end, the price is worth it, she said.

“I really wanted to live within walking distance of my classes and not have to rely on the bus system, even though it’s great,” she said. “To be right across the street from campus is the No. 1 reason why I’m here.”

‘This is my family’

At the Cooperative Living Community, a sense of community among the “clones” — as residents call themselves — is a strong part of life and is boosted by communal dining, chores and CLO-hosted events.

The CLO is run by a board comprised of seven student-residents. It does have a separate house manager, but she or he steps in only to make big decisions, like those involving finances and renovations, said CLO President Lydia Wirgau, a 21-year-old UF student studying Chinese.

In her position, Wirgau oversees new applicants, current residents and CLO alumni, and she helps resolve issues if they arise. She gets compensation for her living expenses, but she still does chores like everyone else.

“My first impression of CLO [came while] walking through the kitchen,” Wirgau said. “It was kind of a little bit messy, but mostly, it was like, ‘Oh dang, this is going to be fun.’”

She said she instantly felt at home and could see herself living there.

Two years later, she can often be found in the rec room, which is available to all residents; checking the CLO email account; or stopping to talk with other residents.

“I want to make myself present at CLO,” Wirgau said. “If I have free time or if I’m studying for stuff, I’ll be studying in the commons area so I’m just around for people to be able to talk to me if they need to.”

She said she feels it’s her responsibility to be welcoming to all residents so they feel comfortable coming to her. “This is my family,” she said.

The Standard, which can be seen from the CLO towering over the landscape, brings benefits to the CLO, Wirgau said.

New businesses that have made The Standard more appealing — like Target and Chick-fil-A in its ground floor and Publix and Starbucks across Northwest 13th Street — do the same for the CLO because of their proximity, she said.

But for CLO resident Dickerson, it comes back to the others living there.

A main reason “I chose it is because it’s kind of like a community,” Dickerson said. “Being away from home and in my first college experience, I kind of wanted to be around people.”