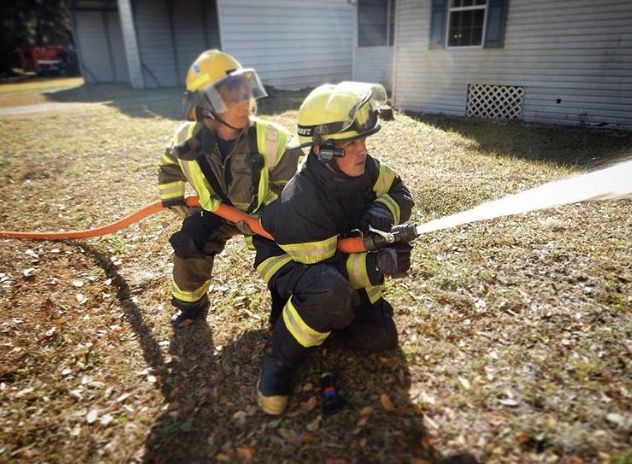 For firefighters throughout Alachua County, varying wages are becoming an important question, forcing many to weigh a passion for the profession with the need for financial sustainability.

A dual firefighter and emergency medical technician working at the High Springs Fire Department, for example, earns an average of $29,704 annually, according to Jenny Parham, High Springs’ city clerk and personnel director.

Smaller departments like High Springs are conducting studies surveying their salaries to analyze the issue.

“Overall, the county does pay higher wages than most municipalities,” Parham said. “We are performing a salary survey, comparing cities around our size and trying to bring our salaries up to date to what they should be.”

The salary study, which was recommended by one of High Springs’ former commissioners, was done by Evergreen Solutions and results were presented to the city commission on Sept. 25.

The study proposed a minimum pay grade of $24,831.56 and a midpoint pay grade of $31,660.24 for a dual firefighter/EMT. However, additional steps must be taken before voting on the matter, and a date has not been determined to do so.

“I believe ours is on the lower scale, and I would like to see it come up to the average of what others are making to be fair,” Parham said.

Aubrey Pennay, a 23-year-old firefighter and EMT for both the Putnam County Fire Department and the Micanopy Fire Department, said she noticed the $2.25-an-hour extra paid by Putnam.

But Pennay said she didn’t enter the profession for the money. With aspirations to go to paramedic school next year, she chooses to work more frequently in whichever department presents her with better opportunities and medical experience.“I did this because it is something I love,” she said. “I am not making millions, but I don’t have to worry too much about money if I stay in my means.”

Pennay said she has noticed higher turnover rates in both departments because of low wages.

“We’re down medics because we can’t retain them,” she said of both departments. “They’re going everywhere else.”

As a result, both small town and county fire departments north of I4 are struggling to maintain employees.

As smaller municipalities struggle to afford the expenses of their fire departments, Alachua Fire Rescue has taken over operations at the Archer, Hawthorne and Waldo fire departments due to financial hardship.

“The turnover rate is high for us, compared to what we’ve been at in previous years,” Pheus said. “That’s one thing that has made us concerned about our wages.”

Pheus mentioned La Crosse as especially financially challenged. There are no plans as of right now to take it over.

Pheus, who has been in the department for 24 years, said wages southward in the state are higher.

But there are incentives that keep firefighters here other than money, he said.

“I think what often motivates people to stay in our department is that they are from our area and they have a passion to serve the community they grew up in,” Pheus said. “Another thing I hope motivates them to stay is the working environment that we attempt to create as an organization.”

“Those things that are not financially measured, they are measured by morale.”

Kayvon Yazdanbakhsh, a health science student at the University of Florida, has been a firefighter at the Cross Creek Volunteer Fire Department for nearly three years, and he also volunteers at Micanopy Fire Department.

“It makes it so much harder to recruit people to work for such low wages,” he said. “There is no shortage of firefighters looking for employment right now, and with an adequate budget, we could really create a lot of jobs for them.”