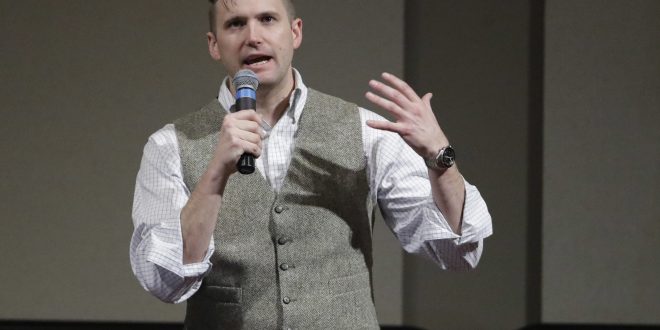 White nationalist Richard Spencer at Texas A&M University in College Station, Texas, in December 2016. Gainesville officials are continuing to make preparations for Spencer's scheduled appearance at the University of Florida on Oct. 19, including for the appearance coinciding with the city's Pride Week. (AP/file)

Officials Preparing For Spencer Appearance To Coincide With Pride Week

Gainesville’s mayor and an organizer of the city’s upcoming Pride Week said they are making special preparations for the Oct. 19 speaking appearance at the University of Florida from white nationalist Richard Spencer, president of the National Policy Institute.

But Lauren Poe and Pride Week organizer Terry Fleming, co-president of Pride Community Center in Gainesville, said they can’t offer specifics in order to shield the plan, other than to note that they are working with UF and Santa Fe College to ensure safety and security.

Community leaders “and I are sharing our concerns and discussing our approach,” Poe said. “We just want to make sure we are there to support one another.”

“This goes far beyond the city and the university, but to the entire county. There has really been a unified effort to speak as one voice and act as one body as we move closer to the date.”

Gainesville Pride is scheduled to begin Friday and continue for 10 days. Its busiest day will likely be the parade scheduled for Saturday, Oct. 21, which is two days after Spencer’s scheduled appearance.

“The [parade] over the course of the day draws about 5,000 people,” Fleming said.

Regarding a possible crowd related to Spencer, Poe said he expects “people to come into our city who aren’t from here and deliberately try to incite violence and create chaos.”

“It is ultimately up to us,” he said, “and the people who do live here and whether you attend the university or are a member of our community at large [to] not take the bait and respond in a negative way.”

Spencer and the white nationalist movement gained perhaps their most attention yet during an August rally in Charlottesville, Virginia.

Attendees of the rally — to which three deaths were linked — could be heard chanting offensive slurs.

UF had pushed against Spencer’s attempt to come in September, but under threat of a federal lawsuit, the university agreed to Oct. 19.

It expects to pay $500,000 for security and has repeatedly distanced itself from Spencer coming.

“No one at the University of Florida invited Richard Spencer,” the university said in one statement. “No one at UF is sponsoring this event. The racist ideas espoused by this organization and this individual conflict with the values of this institution.”

“We do not align with the rhetoric he spills,” Phipps said. “I supported President Fuchs’ notion to deny Spencer’s event in September. We do not even vaguely associate ourselves with his extremist ideology.”

Phipps said he believes free speech stops when it “infringes on life, liberty or the pursuit of happiness.”

“As a student,” he said, “I personally am ready to defend … my fellow students’ rights. Hateful speech and potential violence are not OK, and I sincerely hope that we don’t see any violence coming out of this event, that no students are put in danger.”