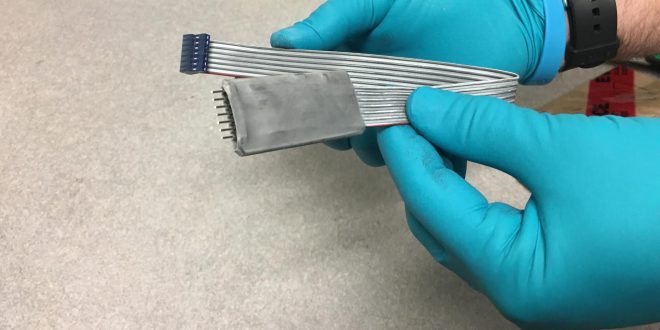 A card skimmer found at Pearl Country Store in Micanopy in March by the Alachua County Sheriff’s Office. While the skimmers are on the rise statewide, Gainesville seems to have been mostly spared, with only one found. (File/WUFT News)

Credit-card skimming has been on the rise in Florida since 2015, but so far, Gainesville seems to have been largely spared.

“We only found one gas-pump skimmer to date,” Gainesville police spokesman Ben Tobias said Thursday. “And we went around and checked every single gas station [in July] in the city of Gainesville.”

The Florida Department of Agriculture and Consumer Services found more than 160 skimmers statewide in 2015. And then in 2016, the number jumped up to 219. And through the first half of 2017, the department had found almost 300.

Card skimmers are devices put in machines that read debit and credit cards — typically ATMs and gas-station pumps — and then send the collected card information to the installer for illegal use. Some are now Bluetooth-enabled, meaning they can send the information to a nearby smartphone, Tobias said.

Card users typically can’t tell if a skimmer is inside a machine simply by looking at it, Tobias said. Despite the one found in Gainesville, he said he still encourages residents to always take precautions.

The most secure thing to do at a gas station is to pay inside with cash, Tobias said.

But “people that want the ultimate convenience pay at the pump,” he said, “so you have to figure out what your personal comfort level is when it comes to that.”

Also, card skimmers are typically installed on pumps on the outskirts of the station, so it’s safer to use ones in the line of vision of the store, Tobias said.

The Florida Department of Agriculture and Consumer Services also suggests checking the station’s Z-tape, which is security tape placed on pumps that, if broken, suggests someone might have installed a skimmer in the machine.

Aubrey Anderson, a 20-year-old student living in Gainesville, said he recently lost $80 to a card skimmer at a gas station not in Gainesville. He didn’t realize money had been stolen from his account until hours after it happened.

“When I swiped my card later that day, everything was gone. All my money was gone,” Anderson said Thursday from the Kangaroo gas station at 13th Street and University Avenue across from the University of Florida.

“I didn’t lose that much, but the fact that people can get your information without having your password, that’s scary.”

Anderson said he now uses only cash when paying for gas.

Derick Holland said he, too, has gotten gas with cash ever since hearing of card-skimming scams a few years back.

“I always go inside to pay for my gas,” the 38-year-old said Thursday from the Circle K station on Southwest 20th Avenue. “You work too hard for your money, so you don’t need anybody taking it.”

A store manager at the Circle K, 26-year-old Rache Farmer, said he takes precautions to secure the pumps at the station.

On any given day, the station has more than 1,000 cars coming through, and all the while, Farmer monitors the pumps. The station has never had an issue, he said.

“We check the pumps throughout the day, especially when it’s a busy time,” Farmer said. “I just make sure that my employees know what they’re looking for and are checking the Z-tape.”

Farmer said he encourages customers to tell him whether a pump has been damaged or altered.

“If you see a pump that has been tampered with or a door is open or anything out of whack,” he said,” just come inside.”

Sammi Sontag is a WUFT reporter and can be contacted by calling (850).206.2749 or by emailing ssontag@ufl.edu.
@@sontag_samantha
Previous Gainesville’s Jewish Community Readying For Spencer At UF
Next Oct. 12, 2017: Afternoon News In 90