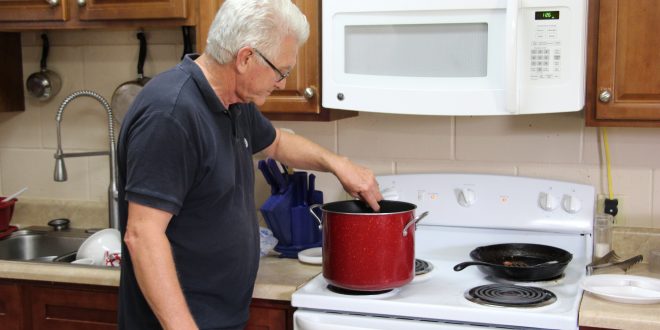 Jess Carter, preacher for Newberry Church of Christ, in the church’s kitchen. Carter and others in the Newberry area — which swung toward Donald Trump in the 2016 general election despite the county overall going for Hillary Clinton — are holding firm in their support as the election approaches its one-year anniversary. (David Street/WUFT News)

Walker Lee describes himself as “a die-hard conservative.”

The founder of the Produce Place farmers market in Newberry considers recent opposition against President Donald Trump to be disrespectful.

“It’s just a shame,” Lee said, “that you have congressmen and senators such as John McCain fighting the president of the United States.”

Though Trump’s approval ratings had dropped to 37 percent by mid-August, Lee and other conservatives are holding their ground on supporting him as the one-year anniversary of his election victory approaches.

And one specific place they seem to be retaining their support is in southwest Alachua County, which is anchored by the city of Newberry. Among the three Newberry precincts, 58 percent voted for Trump and 37 percent voted for his general-election opponent, Democrat Hillary Clinton.

The issue that has drawn perhaps the most widespread criticism toward Trump’s presidency so far is his handling of the violence in August at the Charlottesville white nationalist rally, to which three deaths were linked. But Lee said he thinks Trump approached the matter appropriately.

Broadly, Lee said he does not tolerate racism. “There’s no place in America for racists.”

Meanwhile, Jess Carter, a preacher at Newberry Church of Christ, said that instead of finding issues on which to disagree, citizens should turn to the Bible, which would bring about unity.

“I think people are not finding something to be united with,” Carter said. “I say unite in the Gospel. I don’t mean one big church, but unite and … have that goal of having a fellowship.”

Yet even in the red-leaning area, there are still critics, including on the administration’s decision to end Deferred Action for Childhood Arrivals, or DACA, which was started by the Obama administration in 2012 and allowed more than 780,000 people who entered the country illegally as children to stay.

In addition, they’ve been able to obtain drivers’ licenses, enroll in college and secure jobs.

“I was against” the decision to end DACA, said Karen Rudges, a grill worker at West End Golf Club in Newberry. “I feel if they lived in the United States all their life, they should be allowed to stay as long as they’re citizens who are contributing to society.”

But not everyone in Newberry is opposed to the Trump administration’s DACA decision.

Newberry city Commissioner Jason McGehee, who owns the Frozen Berry ice cream shop in the city, said it was the right one.

“To me, executive orders are not the way things should be run,” McGehee said of Obama putting DACA in place through such an order. “Everything should be run through Congress.”

Regardless, Trump has seemed to indicate that he’ll take a soft approach on DACA recipients.

“We will resolve the DACA issue with heart and compassion – but through the lawful democratic process – while at the same time ensuring that any immigration reform we adopt provides enduring benefits for the American citizens we were elected to serve,” Trump said in a Sept. 5 statement.

One of the broader problems, McGehee said, is lawmakers rallying around the Constitution but not paying attention to the details within, which then causes them to work around it when crafting legislation.

Americans will likely continue to be divided over policies that come from the Trump administration, Carter said, but he suggested citizens take a more muted approach.

“I think we need calm heads and good hearts,” he said. “That’s what we need.”