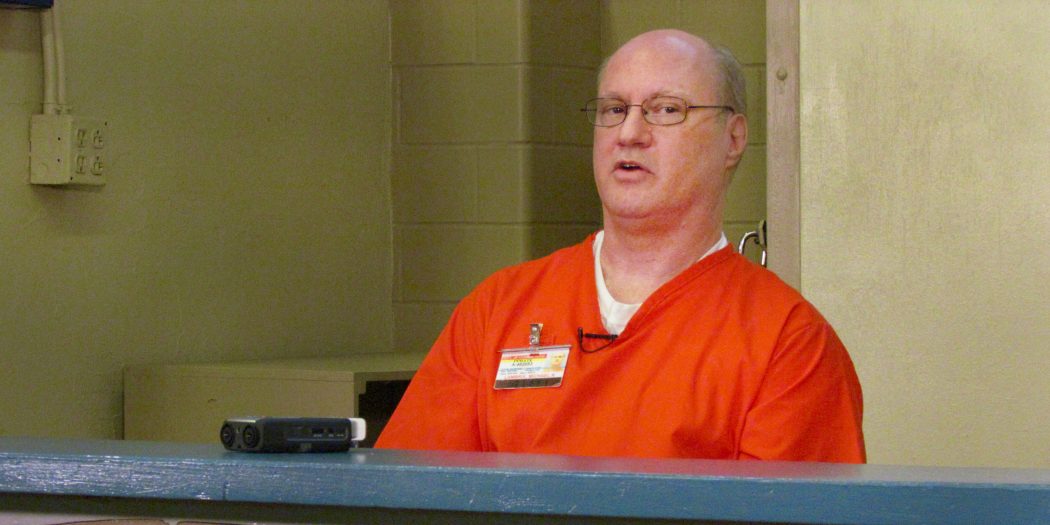 Michael Lambrix speaks at a press conference on Oct. 3, 2017, at Florida State Prison in Starke, two days before he was executed. (Emily Mavrakis/WUFT News)

Lambrix, 57, was killed by lethal injection at 10:10 p.m., 15 minutes after the process began. The execution was scheduled to take place at 6 p.m. but was delayed due to a last-minute appeal Lambrix filed to the United States Supreme Court earlier this week.

In 1983, Lambrix killed Clarence Moore with a tire iron and strangled Aleisha Bryant after inviting them over to his place for a spaghetti dinner in Glades County. In 1984, a jury convicted him on two counts of first-degree murder and voted in favor of the death penalty by counts of 8-4 on Moore’s behalf and 10-2 on Bryant’s.

Since then, Lambrix filed several state and federal appeals to review evidence and testimonies against his case. This resulted in the delay of two scheduled executions in 1988.

In January 2016, his execution was halted once again as the U.S. Supreme Court deliberated whether Lambrix’s execution was unconstitutional based on Hurst v. Florida, which ruled that a jury, not a judge, must find the facts of a case necessary to impose a death sentence. The court said the ruling was irrelevant to Lambrix’s case, which had already been decided decades earlier.

In 2017, the Florida Supreme Court ruled that death sentences must be declared by a unanimous jury of 12.

Lambrix held a group interview with the press Tuesday in which he said he was innocent and used self-defense against Moore, who assaulted and killed Bryant the night of the dinner party. He also the case rested solely on the “deliberately fabricated” witness testimony of his girlfriend at the time, Frances Smith.

“It won’t be an execution,” Lambrix said. “This is going to be an act of cold-blooded murder.”

Lambrix’s last meal was a traditional Thanksgiving dinner and caramel ice cream, which his mother promised to make for him if he were released.

Seventeen people, including five members of the media, witnessed the execution. Bryant’s sister is the only victim family member known to have attended but did not wish to speak with media.

One witness said Lambrix recited the Lord’s Prayer as his final statement and that his mouth opened then closed and his chest shook momentarily during the process. A doctor arrived to confirm his heart had stopped.

About 40 protestors from the Lady of Lords Catholic Church in Daytona Beach gathered outside the prison before the execution to pray for Lambrix’s appeal to be approved.

Miriam Elliot, of Daytona Beach, said Lambrix was innocent of any wrongdoing.

“I really don’t think we should be killing people who acted in self-defense,” she said.

A public information officer said, “the execution took place without incident” at a press conference following the event.

Lambrix is survived by his father, mother, three children and seven grandchildren.

This was the 24th execution carried out under Gov. Rick Scott, the most of any Florida governor. An emailed statement from the executive office of the governor said signing death warrants is one of the Governor’s most solemn duties.

“The Governor’s top concern is always with the families of the victims of these horrible crimes,” the office wrote.

Since 1976, the state of Florida has executed 94 inmates total. There are currently 357 inmates on death row.

Emily Mavrakis is a reporter with WUFT News and can be reached by email at mavrakisemily@gmail.com or by phone at 352-392-6397.
Previous First Person: Why I Wrote To A Death Row Inmate And Watched His Execution
Next Richard Spencer Will Speak at UF on Oct. 19