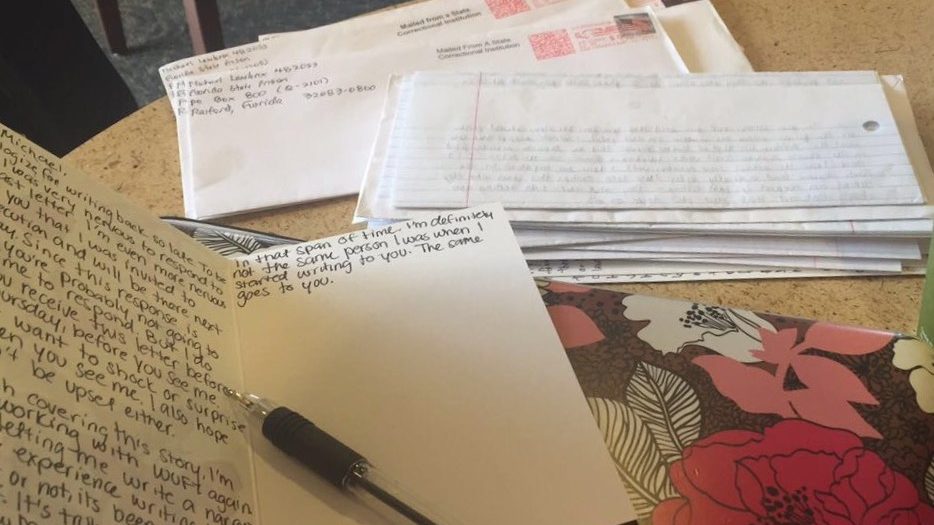 First Person: Why I Wrote To A Death Row Inmate And Watched His Execution

Editor’s note: 57-year-old Cary Michael Lambrix was convicted in 1984 for two first-degree murders of Clarence Moore and Aleisha Bryant in Glades County. Lambrix insisted he was innocent, claiming he killed Moore in self-defense when he found Moore strangling Bryant. He spent 33 years on death row and avoided execution three times. Rebekkah Mar, former WUFT journalist and current morning news producer at WINK News in Fort Myers, corresponded with Lambrix from February 2016 to September 2017. In May  2017, she visited him at the Florida State Prison to write his story. She also worked with United Kingdom’s Proper Podcasts, to help record the podcast “Regrets Of The Dying: Mike” hosted by Georgina Scull. Once Lambrix’s execution was re-scheduled, WUFT and the Florida Association of Broadcasters reached out to Rebekkah for her to go to his execution. (The following feature does not reflect the beliefs of WINK News.)

As I waited in the visitation room at the Florida State Prison, one of the journalists sat down next to me with the envelope given to him by the Department of Corrections officials, containing a notebook and two pencils. On the left hand corner of the envelope, he wrote in three lines, “Cary Michael Lambrix, 10/5/2017, #74.” As I looked at it, he said “This is my 74th execution.” I looked at him, pulled out my envelope and wrote “Cary Michael Lambrix, 10/5/2017, #1.”

I am not a seasoned journalist. I’m 22 years old. I do not have experience covering executions. But there I was sitting in the fourth row among other media witnesses, waiting to watch convicted murderer Michael Lambrix die.

Before taking a van from the State Prison to the death chamber, the four other journalists told me the execution wouldn’t be what I expected. They said it would be anti-climatic and short. Still, that’s not how I saw it.

We walked into the room at 9:45 p.m., three hours later than the expected start time. When we walked in, the 17 people were already seated, including state witnesses and Aleisha Bryant’s sister.

Facing the back of the room was a large rectangle shaped window covered by a brown curtain. At 9:53, the curtains went up and there, laying down on a gurney on the other side of the window, was Lambrix and three other men standing around the room. One of the men, the execution warden, picked up the phone on the wall talking to the governor’s office as Lambrix stared straight at the one-way mirror. His hands and body were covered, while a brown belt tied down his arms with an IV hooked up to his veins.

The warden asked if he had any last words. He replied in a soft choked-up voice, “Yes sir I do, I wish to recite the Lord’s prayer.” Ending with the words, “deliver us from evil, amen,” the warden began the execution.

Lambrix stared at the window, knowing we were all watching on the other end, and his eyes closed. His chest started shaking sporadically, moving up and down every few seconds. His mouth fluttered and then stayed slightly open turning a shade of light purple. Once his chest stopped moving and he remained still, the warden touched his eyes and with force, shook his shoulders. Once the doctor examined Lambrix, the warden called his time of death at 10:10 p.m.

I stared, knowing all of these steps would unfold based on the other reporters’ predictions. I stared back at the window looking at the reflection of the witnesses watching through the window, as we all looked at Lambrix’s body in the other room.

….your story is slightly confusing to me. I have tried to research as much as I can but I’m still stumped….Even though I cannot call you, I was wondering if you wouldn’t mind writing to me, as I will write to you. I want to tell a nonbiased story of what happened so I need the facts and I want to hear them from you….I know this is hard since you don’t know who I am, and I don’t know who you are, but I want to try to get to know you. I hope you will let me tell this story the right way.”

Those were the first words I wrote to convicted murderer, Michael Lambrix, in February of 2016.

When people ask me why I took the time to write to Lambrix, I laugh. I asked that same question to other people who wrote to him. Their responses varied from “I grew to care for him” and “I don’t agree with the death penalty.”

I started this story because I was curious. When the Supreme Court in January 2016 declared Florida’s system for sentencing prisoners to death as unconstitutional, I asked “so does that mean all of the inmates scheduled to be executed will appeal their case?” Before anyone could say that was impossible, I stumbled upon Lambrix. Within days, he was using the Supreme Court’s declaration as a window out of his execution. At that time, his execution was only a few weeks away.

Lambrix spent nearly his entire adult life, more than 33 years, behind bars — waiting to die. Several people who wrote to him, some from as far away as the United Kingdom, thought his death an injustice. Lambrix insisted into this week the state was sentencing an innocent man to death. But the Florida Supreme Court, as well as prosecutors, didn’t agree. The courts denied every appeal Lambrix filed. He fought for his case during the entirety of his sentence.The courts kept saying no.

The courts kept saying no.

I didn’t tediously study Lambrix’s case or analyze every handwritten appeal he filed. We went a year without corresponding. But in March, we resumed writing back and forth. In our written interactions, Lambrix was always sweet and kind. He spent most of his free time studying law, talking to people outside the prison who could help him, and writing to his several pen pals.

We will never know if Clarence Moore actually attacked Aleisha. Maybe Lambrix was truly in the wrong place at the wrong time. Maybe he thought he was playing the hero and just was too late in saving Aleisha. But the evidence against him was enough to convict. A jury decided he was guilty, as did a judge.

Below is the last letter I wrote him. I wrote about how our relationship grew over time, but also touched on my biggest regret in this story; not focusing on Aleisha Bryant. I should have tried to reach out to Aleisha Bryant’s family. If I could go backward 18 months, I wouldn’t focus so much on Lambrix, but focus on the victim — how she ended up at Lambrix’s home that night, how she met Moore, and how she died.

I’ll never know if he read this final letter. But at the media interview just two days before he died, he said something he’s never mentioned to me before.

“As for the Bryant family, I have nothing but sympathy for them. I understand that they need to believe that I killed their daughter. I understand for them, that’s what closure is about. But I also know that they’re wrong. And if my execution will bring them peace, then maybe that at least comes out of it.” 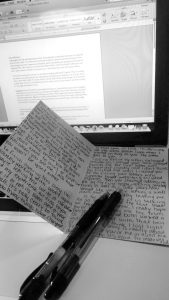 I apologize for the writing back so late. To be honest, I was very nervous to respond to your last letter. I’m even more nervous to tell you that I was invited to go to the execution. Since this response is delayed, you’re probably not going to have time to respond. But I do hope you receive this letter before next Thursday, before you see me. I don’t want to shock or surprise you. I also hope you won’t be upset either.

To finish covering this story, I’m actually working with WUFT again. They’re letting me write a narrative about my experience writing to you. Believe it or not, It’s been over a year and a half. It’s truly crazy to think about how many things have changed in that span of time. I’m definitely not the same person I was when I started writing to you. the same goes to you.

Looking back at the letters exchanged between us, I noticed that your tone changed towards me. Your first letter was distant and slightly cold. I don’t think you trusted me until I called you out for filling your letters with supporter based websites and scripted responses. then You started addressing me by my first name, adding smiley faces as well as insides jokes. You seemed like you were letting a wall down and were finally trusting me.

So for the sake of us talking for so long, and for the trust that we have in each other, I really hope you’ve been telling me the truth. Because if not, we both wasted a lot of time.

And with that being said, I think I lost sight of what this story is really about. It’s not about you or me or the death penalty. It’s about the people who died.

I know you told me that you wish you could start that night over again. And if you could respond, you would tell me about the DNA evidence that could prove Clarence attacked Aleisha, but it was thrown out. From all of the letters, research and interviews, it’s hard to not to see the holes in this case and possibly your conviction. And if you’re right about your innocence, then justice wasn’t served.   But the sad thing is, you were the only one there when they died. And you’re the only one who knows what truly happened. So it all goes back to trust.

If I could this over again, I wish I tried harder in contacting Aleisha’s family.

While writing this letter, my sister called me. She told me my grandmother just died. I can’t begin to describe how awful it is to lose someone. The pain makes every little thing in my life from broken relationships to failed friendships seem so trivial. I wouldn’t want anyone I care for to go through this.

I’m genuinely sorry that your family has to go through it. But my heart goes out to Aleisha’s family and even Clarence’s family.

Thank you for responding to my first letter.

Rebekkah is a reporter for WUFT News and can be contacted by calling 352-392-6397 or emailing news@wuft.org.
Previous Oct. 5, 2017: Afternoon News In 90
Next Michael Lambrix Executed After 33 Years on Florida’s Death Row 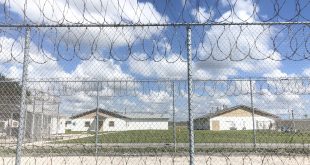 Florida is facing a class-action lawsuit on juvenile solitary confinement