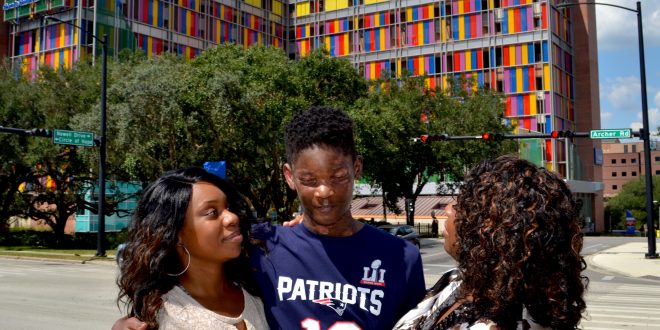 Dacarri Davis, 12, stands with his mom, Ashley Johnson (left), and grandmother, Cassaundra Brockman, outside UF Health Shands Children’s Hospital on Wednesday before a follow-up appointment on Dacarri’s Stevens-Johnson syndrome. During Dacarri’s original stay at Shands, Brockman had a room at the Ronald McDonald House of North Central Florida, but got it only after staying at the hospital for a week because of Ronald McDonald’s long waiting list. (Victoria Pavlock/WUFT News)

Cassaundra Brockman camped out at UF Health Shands Children’s Hospital next to her 12-year-old grandson’s bed for a week.

“Nana, don’t go. Nana, be safe. Nana, I love you,” Dacarri Davis told his grandma when she left his side to eat dinner.

Dacarri suffers from Stevens-Johnson syndrome, a rare disorder that causes severe skin blisters and the appearance of being burned.

The sequence that resulted in Dacarri getting the disorder started two weeks before he was admitted to Shands, when he stepped on a piece of glass in his bathroom.

His mom put Neosporin on the wound, but a week later, his foot still didn’t feel quite right.

Dacarri’s mom took him to urgent care in Tallahassee, where they live, and he was prescribed an antibiotic for what doctors there thought was a sinus infection.

But the antibotic brought on Stevens-Johnson syndrome, which caused blisters on his body and the swelling of his face, Brockman said.

When these symptoms started, the family took him to another health-care facility, which diagnosed him with the rare skin disorder and referred him to Shands.

Dacarri arrived there on Aug. 26, and because of the disorder’s similarity to burns, he was taken to the hospital’s burn unit for treatment. Brockman, who’s retired because of a disability, went with Dacarri so his mother could stay at home to care for her two other children.

Brockman said she soon found out that she was eligible for a room at the nearby Ronald McDonald House of North Central Florida. The 55-year-old applied and was put on the three-and-a-half-page waiting list.

In the meantime, she stayed at the hospital. At night, she would sleep in the recliner in Dacarri’s room or, if the nurses wouldn’t let her, wait in Shands’ Ronald McDonald family room for one of the few beds there.

If those options weren’t available, she slept in a straight-back chair in the family room.

“We would go and sit there,” Brockman said of the family room, “and try to be the first one to request a little quiet area so we could get a good night’s rest there.”

Recently, Shands has improved in a variety of pediatric specialties. And over the past five years, it has seen a 50 percent increase in the volume of child patients, hospital CEO Ed Jimenez wrote in an email.

But the hospital shining as a national and international leader for children has presented a dilemma for Brockman and other families traveling for care: So many are coming that free-of-cost housing slots at Gainesville’s Ronald McDonald House are tough to get.

A 10-minute walk from Shands, Ronald McDonald is a main absorber of family members who can’t afford hotel rooms or other housing while their children receive care, who want the camaraderie of being around families in similar situations, or who simply want to be close to the hospital.

A tram gives free rides from Ronald McDonald to Shands, and when it isn’t running, family members can still get to the hospital quickly, said Sherry Houston, the Gainesville location’s executive director.

“To be close to your child is a priceless experience,” she said.

Ronald McDonald has 31 rooms for families from Shands, but its increasingly long waiting list forces an average of 35 families a month to be turned away, Houston said. In 2016, the organization didn’t have an available room for a total of 492 families.

Since Houston began working there three years ago, it has always been at max capacity, which results in the list constantly growing in length.

But it hopes to be able to begin accommodating more — first by converting the night manager’s suite into family rooms and eventually, if the funds become available, adding 15 or 16 more rooms.

The Gainesville location receives 24 percent of its annual budget from the McDonald’s restaurant chain; the rest comes from fundraisers and donations.

To garner this money, the organization has to continually fight against “lots of misperceptions,” like that its families are homeless, Houston said.

“Donors want to give to organizations [and] they want to understand where their money is going,” she said.

“They want to feel that their money is making an impact, and they know that when they give that gift, it’s being used in a way that they want it to be used. So we are proving ourselves every day in our community.”

Families not able to get a Ronald McDonald room often, like Brockman, wait for the small number of beds in the Shands family room, or they stay in hotels that are usually farther away, Houston said.

Houston said she doesn’t know where other, low-income families go. But in a promotional video online, one mother said that, because of hotel costs, she might have had to switch to a homeless shelter if a Ronald McDonald room hadn’t been available.

Climbing demand at Ronald McDonald is attributable to Shands’ ascending reputation for child care, Houston said. This is especially true for heart issues, perhaps the No. 1 illness category for families staying there.

“If you want some of the best cardiac care for your child, you come from all over the world to Shands to be with these doctors,” Houston said. “And when you don’t have a home nearby, we are your safety net.”

Indeed, Jimenez said, Shands has the top U.S. program for outcomes in pediatric heart transplants, and the hospital has cared for children from across the U.S. and 30 other countries.

Last spring, Shands completed a $20.7 million renovation of its Neonatal Intensive Care Unit, which increased its number of beds and size overall.

“It is because of successful UF Health patient-care programs and our expertise in pediatric research that very ill patients seek our care,” Jimenez wrote in an email.

In 2016, 627 families with children with these and other conditions stayed at Gainesville’s Ronald McDonald, which is run by a small staff and about 4,000 volunteers, Houston said.

One of those volunteers is Tammy Aagard, UF’s associate vice president for enrollment management. For the past year and a half, she has volunteered every Wednesday, running the reception desk and cooking meals.

Aagard stayed in a Ronald McDonald House herself in Colorado after her son was born 12 weeks early.

“I’m able to give them hope because I know what they are going through,” she said. “I’ve had families bring me their baby’s hospital bracelet, and they’re so excited about the progress they’ve made.

“Even though I rarely see their baby, I feel like they’re a part of my family.”

On Sept. 2, about a week after Dacarri arrived at Shands, Brockman received a Ronald McDonald room.

“I used to have to think about where I was going to sleep at night and what I was going to do,” she said of her time at the hospital. “I can come back to the Ronald McDonald House and have a secure place. It’s like a little oasis in the middle of turmoil.”

Brockman said being around other families going through similar situations aids in navigating hers.

“It helps to dull the pain,” she said, adding that Dacarri was released on Sept. 19. “I meet other families, and they tell me that they’re praying for my family.

“I tell them I am praying for theirs, too.”

Victoria is a reporter for WUFT. She can be reached at vlpavlock@ufl.edu or (561) 427-4156.
@@victoriapavlock
Previous Sept. 28, 2017: Afternoon News In 90
Next Florida Voter Rights Restoration Supporters Collected 124,000 Signatures For Issue To Reach The Ballot

Not only did COVID-19 unleash a virus that affected the entire globe, but the growing pandemic also triggered an epidemic of anxiety and depression among America’s Generation Z and millennial populations. And many people turned to cannabis, as opposed to prescribed medication, to calm their minds. In 2021, cannabis sales increased to $30 billion, 40% higher than the previous year. The United States is expected to make up 75% of global cannabis sales in 2026.