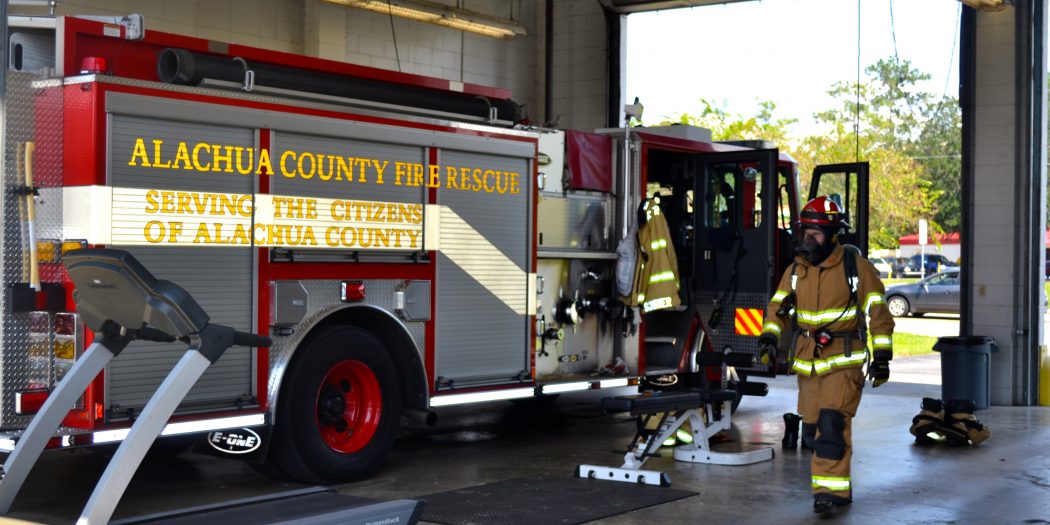 Lt. Dave Torsell said he will not let political boundaries get in the way of protecting citizens. "I'll do what my jobs says, but I'll also use common sense," he said. "The building across the street from the station is a city building. If there's a fire, do they expect me to just sit back and watch? No way." (WUFT/Elayza Gonzalez)

Alachua County voted to end their agreement with the City of Gainesville for firefighter services in May 2017, which could result in longer response times for residents who live south and southwest of Gainesville.

The fire service assistance agreement, otherwise known as FSAA, was an agreement between the city and the county that allocated fire-protection services from either county or city fire rescue stations to residents living within Gainesville or just outside of city limits. The purpose of this agreement was to ensure fast response times, according to Gainesville city Commissioner David Arreola. In cases when city fire rescue stations responded to county calls, the county would pay the city for those services.

“When I was first told of the cancellation, my immediate concern was for the citizens who lived in the immediate urbanized areas outside of city limits,” Arreola said. “That is why we are taking steps and working to find a better solution.”

One of those potential solutions is expanding the city limits through annexation to cover the areas that would fall outside of Gainesville, Arreola said.

However, Alachua County Fire Chief William Northcutt said he thinks the annexation is a “scare tactic” meant to bring people into Gainesville so the city could receive more state and federal funding.

“I’ve heard some City Commissioners say, ‘You’re going to die now that we are going to get out of this agreement with the county. You need to annex into the city,’” Northcutt said. “That is flat-out not true. It’s dishonest, disingenuous and disappointing.”

The debate over this agreement has gone on for more than 13 years, according to Lee Pinkoson, an Alachua County Commissioner.

In 2004, the city and county worked on a master plan for fire services that identified fire stations’ ideal locations and how those stations would be funded.

Alachua County Commissioners had to decide whether to pay $2 million per year to the City of Gainesville for their services or use those funds toward the county to build additional stations and add engines to the areas in need. County commissioners chose to go with the later, Pinkoson said.

“What it comes down to is: How much do we want to spend, and where is the best place to spend it?” Pinkoson said.

Some of the additional stations the county is proposing to build would be located on Millhopper Road and Southwest Williston Road.

“Once we get these stations built, the areas that fall immediately outside of city limits are going to start getting better protection, if they are not already,” he said. “So it’s definitely going to be a change in service delivery.”

The average response time for residents receiving fire protection from the county is 13 minutes and 42 seconds, according to the most recent data available from 2014. This is for fire rescue stations 12, 15, 16, 17 and 19 — stations that are within or close to city limits.

According to the National Fire Protection Association, the national average response time standard falls between 10 to 15 minutes, depending on whether it is a urbanized or rural zone.

Northcutt said the end of the agreement could cause an increase in these response times if the city chooses to not respond to calls immediately outside of Gainesville.

City Commissioner Arreola said he does think the end of the agreement and the hypothetical scenarios that go along with it are “scary”, and his main concern is that response times will fall below national standards.

The Meridian Behavioral Healthcare Center is located in one of the areas with the increased amount of emergency calls, according to a map provided by Chief Northcutt showing the concentration of calls in the Gainesville area.

Northcutt said a lot of calls come from Meridian because they are mostly medical calls for patients who might be under the influence or have not been cleared by the hospital.

Residents and business owners close to Meridian fall outside of city limits, with the closest fire stations being city ones.

The end of the agreement could potentially make this area experience slower response times, Northcutt said, because county fire stations will have to respond.

By comparison, the closest city station, Station 1, is just 3 miles and approximately 6 minutes away.

With the end of the agreement, Station 1 will not be obligated to respond, Northcutt confirmed. However, he think this is not going to affect the quality of fire rescue services provided to the local population.

Jamie Barnes, the office manager for the Gainesville Skin Cancer Center at Serenola Plantation, which is located across the street from Meridian, said she is concerned about the impact of FSAA ending.

“The end of this agreement is extremely important,” Barnes said. “It is our livelihood, it is our careers, it is how we take care of our families and how we serve the community. I do not care where the fire rescue comes from as long as it gets here on time.”

The University of Florida filed a dismissal to a complaint made by a former astronomy doctorate student in an ongoing lawsuit.