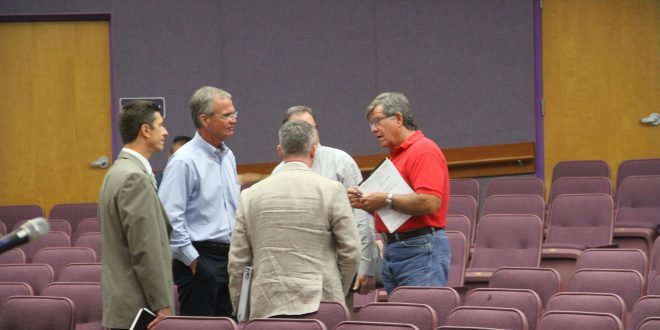 Representatives of HPS Enterprises LLC speak with a Union County resident in favor of the phosphate mine after Monday's meeting. (Justin Ford/WUFT News)

On Monday evening, Louella Phillips-Whitford stood in front of a packed courthouse during a Union County Commission meeting and held up Ziploc bags of what she claimed was contaminated drinking water.

Phillips-Whitford lives 3.7 miles from a sinkhole that, a year ago in September, opened up at a phosphate plant owned by the Mosaic Company. A vocal advocate against phosphate mining, she has appeared in the media before, holding mason jars of water from her sink and saying that she refuses to give the water to her dogs.

“I just wanted to dip up here and say what I needed to say,” she said. “These people don’t live it. They have the facts, but they don’t live it.”

She received a standing ovation, but the room fell quickly back into heated debate.

The Origin of the Phosphate Debate

In early 2016, four land-owning families — Hazen, Howard, Pritchett and Shadd — created HPS Enterprises in the hopes of profiting off of phosphate deposits within their land in southwestern Bradford County and southeastern Union County. A few months later, they announced a plan to mine about 60 million tons of phosphate rock across 7,400 acres of their land for the next 20 to 30 years.

Initially, the public response between Union and Bradford counties was split. Phosphate is used primarily as a fertilizer, and Florida accounts for about two-thirds of the U.S. supply of the mineral and nearly one-quarter of the global market, according to the Florida Department of Environmental Protection.

However, as presentations continued and plans were made public, residents of both counties began to fear that — despite promises from the company of job creation and economic growth — the project might cause more harm than good.

Debate during county commission meetings grew heated for roughly two months, bordering on violence, and those opposed to mining formed the advocacy group Citizens Against Phosphate Mining in Union and Bradford Counties.

In April 2016, Union County’s commissioners voted unanimously to ban all mining permits in the county for at least one year. With the moratorium in place, the crowd of residents erupted in applause, but HPS said the moratorium would not stop the company from continuing to develop plans.

A year a half later, citizens of the rural areas are preparing for Union County’s moratorium to end.

While Union County extended the moratorium until the end of January 2018, barring the acceptance of any applications for phosphate mining, Bradford County’s commissioners voted against an extension.

On July 28, despite the moratorium in Union County, HPS submitted an application to move forward with its mining project on land the families own within both counties.

Bradford County has not yet reached a decision on whether to accept the application it received, but Union County rejected the application on Aug. 21. A week later, Hopping Green and Sams, the law firm representing HPS, sent the Union’s commissioners a letter notifying them of the company’s intent to request relief in the amount of $210 million from the county.

The letter values phosphate reserves on the property at more than $210 million, saying HPS loses $18,000 each day it cannot mine.

Representatives of HPS declined to comment after the hours-long meeting Monday at Union County High School, though there was no shortage of public debate.

Union County commission Chairman James Tallman met dissent from citizens with a stern call to order and a threat to remove anyone who persisted.

“We’re going to have a courteous, civil meeting,” Tallman told the crowd.

Residents against mining cited the dangers of contamination from the radioactive materials radon and radium and the likelihood of irreversible pollution in New River, a tributary of the Santa Fe River.

Meanwhile, those in favor focused on the potential economic growth and creation of jobs that the mine would bring.

Mary Alford, an environmental engineer from Gainesville, said the prospective economic benefits associated with phosphate mining in both counties should not trump the economy surrounding clean rivers.

“So much of our economic development in Alachua County is dependent on good clean money that we make here on tourism and on ecotourism,” Alford said. “That’s highly at risk if something bad happens in the mining process.”

At the meeting, HPS was represented by Edward Murawski, a program manager at the engineering consulting company Kleinfelder.

Murawski acknowledged concerns about proximity to county waterways and excess light and noise that accompany such operations.

“We never proposed to mine the New River,” Murawski said. “There will be no haul trucks [and] no semis taking the material outside the counties,” and all materials will be exported by rail.

Murawski also noted the use of a unique reclamation method that requires less water and returns it to the land in a usable state.

“With sand-clay reclamation, we can put back the land exactly as it [had] been prior to,” Murawski said.

Along with its environmental reassurances, HPS is also promoting the economic impact mining would have on the poor counties.

“The project will contribute an annual stimulus to the regional economy, create jobs, and increase ad volarem taxes,” a website about the project reads.

Billy Ray Elixson, a seventh-generation Union County landowner, spoke in favor of mining Monday on the grounds of property rights.

Gesturing to those who had voiced their opposition, he said, “I do understand all their concerns, but still, this is Union County the last time I looked.”

Elixson was one of two persons besides Murawski who spoke in favor mining.

Waiting for an Answer

Despite the January extension in Union County for another year-long moratorium prohibiting the acceptance of new mining permits, commissioners again stalled at Monday’s meeting on the decision on county land-use regulations.

In attendance was Alachua County Commissioner Chair Ken Cornell, who emphasized the significance of the discussion on land use in a county with less than 16,000 people.

Cornell explained why Alachua County has such a vested interest in the fight.

“It’s a shared resource between [Union] County and Alachua County,” Cornell said. “Our commission has expressed significant concerns about the mining operations and how it might impact our resources in Alachua County.”

Union County Commission Vice Chair Karen Cossey said Tuesday that the board voted to table a decision on phosphate mining and will hold another meeting in two weeks.

“We will get more facts together,” Cossey said by phone.

Justin Ford is a reporter for WUFT news and can be reached at 561-809-2670, and by email at justin.samuel.ford@gmail.com.
@@Justinian_Ford
Previous Gainesville Residents Still Recovering From Hurricane Irma
Next Sept. 19, 2017: Afternoon News In 90