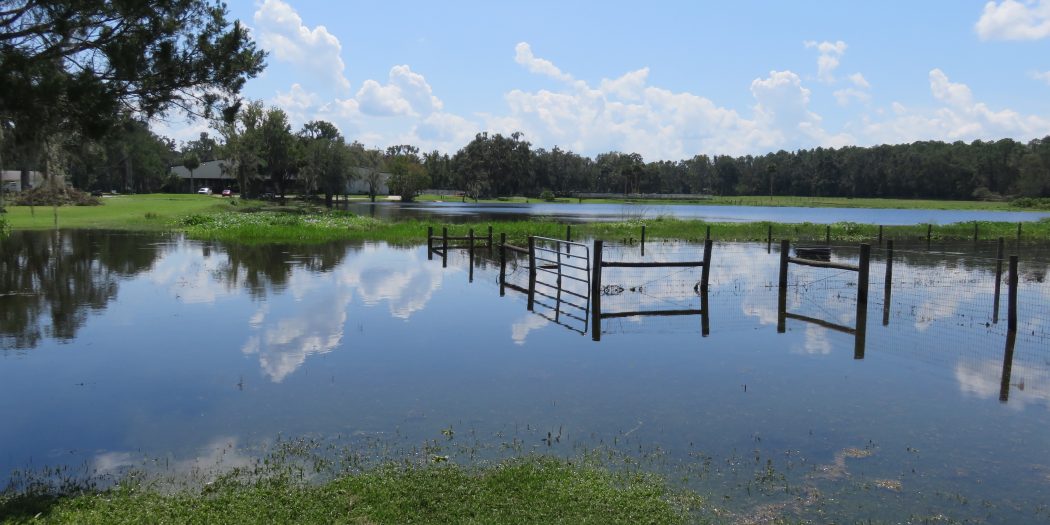 After Irma’s winds whipped through Alachua County, a blue sky is reflected in finally still waters Friday, but these waters are not usually here. A farm experienced major flooding, causing almost a foot of water to submerge a lake dock and spill into horse stalls nearby.

The pastures and barns of the UF Horse Training Unit on 1934 SW 63rd Ave. are partially under water after the storm, and now staff wait for the flooding to recede while they clean up debris around the farm and continue with daily routines of horse care.

“Water goes out naturally into Paynes Prairie,” HTU Farm Manager Justin Callaham, 39, said. But this time floods took up most of the farm and two buildings, which he first assessed the morning after the storm.

About 50 horses, including the horses of sheriffs, rode out the storm on the HTU property. Some were in paddocks and others in the barn, and all came out unscathed. However, the farm itself did not.

Callaham spent the night on the farm with six UF students who helped watch over these animals. They took most of the horses to enclosed paddocks and left five stallions in the barn Sunday evening.

And after a night of heavy rains, they had to retrieve the horses from the flooded barn, and they took them out to pasture with the others. Callaham said that the flood waters came up to about three or four feet in the deepest parts.

All of the horses at HTU are marked with “UF” on their bodies. The older horses have the two letters freeze branded onto their coats while the younger, still nameless horses, had to have them painted onto them before the storm hit.

“It’s really important that your horses have some sort of identification on them,” Victoria Anderson, a UF senior and HTU employee said.

Anderson, 21, was one of the employees who remained on the farm during the storm. “It was crazy,” Anderson said. “As the night progressed it definitely got a lot worse.”

They checked on the horses regularly during the initial hours of the storm but soon opted to stay inside once the winds picked up. At one point, Callaham said it sounded like there was a tornado. “There were three parts during the storm where people definitely found shelter very quickly.”

On Monday, the morning after, Anderson said she was frightened upon hearing a “giant crash” around 10 a.m., which she soon discovered was made by a fallen tree that was knocked down by the last gusts of winds churned out by Irma.

Fortunately, it was not near the horses.

Besides fallen trees, scattered branches, and a power outage that lasted Sunday – Thursday, the farm was submerged beneath waters that overflowed and hid the la

ke and small pond that already existed on the property.

“It was up to my knees,” Shelby Smith, a UF grad student and HTU employee said. “The pictures didn’t do it justice whatsoever.” Smith, 22, arrived to help the morning after the storm.

Smith laughed while describing seeing alligators around the farm during her feeding rounds, though she said they were small enough not to raise concern.

The HTU normally stocks an extra four days worth of feed for the horses, so the staff felt sufficiently prepared for the hurricane.

Smith was there during hurricane Matthew as well, but she said Irma was much worse.

Now, the horses graze peacefully in their pastures, walking, unperturbed, through large puddles and around fallen tree limbs.

Smith, Anderson and Callaham drive through the remaining flooded areas of the farm on an RTV, and the equine residents are quiet apart from the occasional whinny.

“Today we’ve been moving them back to their original homes,” Smith said.

Christena is a reporter for WUFT News and can be contacted by calling 954-793-6813 or emailing christenacarollo@gmail.com.
Previous UF School Of Music Moves One Step Closer To Long-Awaited Renovation
Next Sept. 18, 2017: Morning News In 90