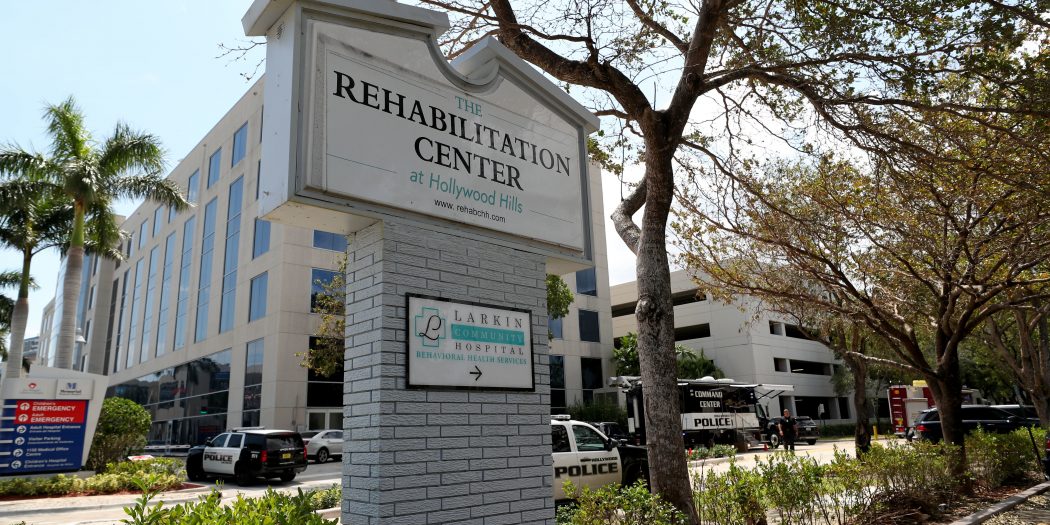 Police surround the Rehabilitation Center in Hollywood Hills, Fla., which had no air conditioning after Hurricane Irma knocked out power, Wednesday, Sept. 13, 2017. Several patients at the sweltering nursing home died in Hurricane Irma's aftermath, raising fears Wednesday about the safety of Florida's 4 million senior citizens amid widespread power outages that could go on for days. (John McCall/South Florida Sun-Sentinel via AP)

Calling the deaths of eight seniors last week an “isolated incident,” a nursing-home industry group will hold a meeting Friday to discuss a move by Gov. Rick Scott to require nursing homes to be equipped with generators to power air-conditioning systems when electricity goes out.

The Florida Health Care Association will host an emergency-preparedness “summit” in Tallahassee. Scott on Saturday directed the state Agency for Health Care Administration and the Department of Elder Affairs to issue emergency rules that would force nursing homes and assisted-living facilities to have backup power systems to keep buildings cool.

The Scott administration and the nursing-home industry have scrambled after eight residents of The Rehabilitation Center at Hollywood Hills in Broward County died Wednesday. Hurricane Irma knocked out the facility’s air-conditioning system three days before the deaths.

“Our members are committed to the safety of their residents,” association spokeswoman Kristen Knapp said. “We have created this summit and we’re planning it in an effort to bring everyone together to discuss what is a reasonable timeline and method for implementation.”

The association, which includes hundreds of nursing homes across the state, has described the deaths at The Rehabilitation Center at Hollywood Hills as an “isolated incident.” It said the Broward County facility is not a member of the association.

In announcing the emergency rules, Scott said they are based on requirements already in place for hospitals.

The rules, however, might have relatively little impact this hurricane season, which ends Nov. 30. Nursing homes and assisted-living facilities would have until mid-November to carry out the requirements.

Knapp said the summit Friday will include discussion of a series of issues that could be involved, such as the costs of generators, the possibility that nursing facilities would need to revamp electrical wiring and whether local zoning issues could be raised. She said installing a generator at a nursing home can cost hundreds of thousands of dollars, with costs varying by the sizes of the facilities.

“There are a lot of factors to consider, especially with the timeline that the governor has laid out for this,” Knapp said.

Another issue is that, under state law, emergency rules are designed to be in effect for only 90 days. In the announcement Saturday, Scott’s office said he would “fight for legislation” that would put the generator requirements into law during the 2018 session, which starts in January.

Sen. Lauren Book, D-Plantation, filed a bill (SB 284) on Friday that would require nursing homes and assisted-living facilities to have generators that could supply power for five days.

The News Service of Florida is a wire service to which WUFT News subscribes.
Previous Sept. 18, 2017: Morning News In 90
Next GRU Gets Help To Restore Power From Neighboring States