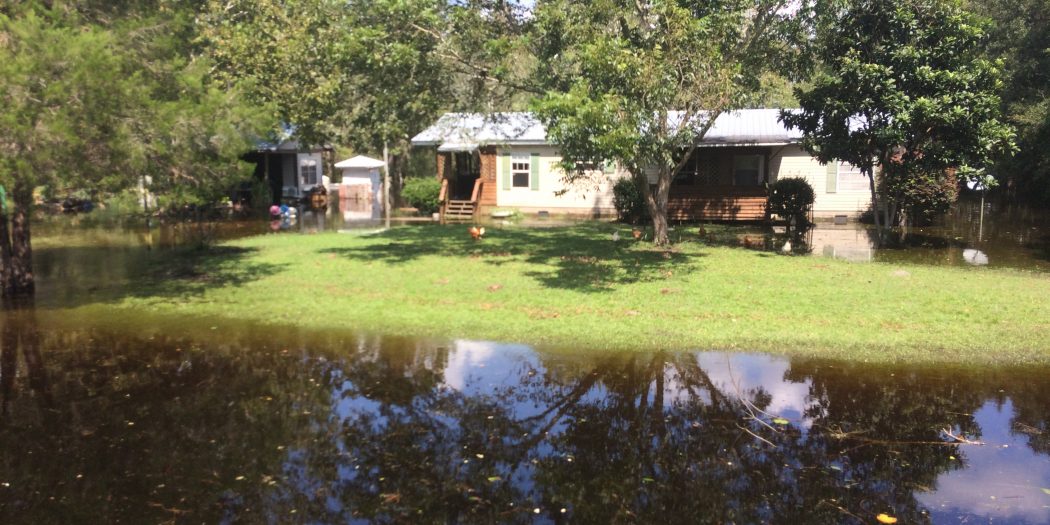 A resident's livestock has limited room to roam with floodwaters covering most of the lawn. (WUFT News/Ronald Sonbeek)

When his community needed help after Hurricane Irma brought devastating floods to Samson City, Bill Wilson immediately stepped up. The 52-year-old owner of the Samson Lake Plantation has spent the days following the storm driving around in his “swamp buggy” bringing food and supplies to residents unable to leave their homes due to the high waters.

The rain from Hurricane Irma caused Lake Samson to overflow and has lead to floods ranging from two to four feet. The Federal Emergency Management Agency declared Bradford County an area designated for individual assistance.

According to Benji Bennett, a planner for the Emergency Management Services of Bradford County, residents of Samson City can apply for individual assistance from FEMA as of Thursday night.

The county had a difficult time trying to get residents to evacuate to shelters.

“We had the military out there to help residents evacuate from their homes,” he said, “Most people refused to come.”

Those who did stay are now working to get their community back to normal.

Wilson, whose plantation houses horses and cattle, was called by the Bradford County sheriff’s office Tuesday and was asked to assist in the recovery efforts.

“It is my duty to help my fellow brother out in times of need,” he said, “I won’t rest until everyone is accounted for.”

The father of four has spent hours every day helping his neighbors in recovery efforts, then goes home to deal with the damage on his own property, all before taking care of his family.

Areas of his plantation are up to six feet underwater. He said the flooding is the worst he’s seen in the 20 years he’s lived in the area.

“If Bill wouldn’t have volunteered to drive us through the water, we’d have to walk the entire way,” said Kelley Dyal, an engineer sent to access the flooding.

Dyal’s job is to determine when it is safe to restore power in the flooded areas.

The way the power lines were built causes problems with restoring electricity, with the potential for short breaks and fires.

Dyal has been assessing storm damage for over 25 years. The areas he oversees spans five counties. He, just like Wilson, said the flooding in Samson City is among the worst he’s ever seen.

“You have to be careful and cautious when restoring power,” he said, “one wrong move can cause a lot of damage to a home.”

Since the lines cannot be placed in elevated areas, they were placed in front of homes along the road for easy access.

The only homes in the community that have had power restored are the ones that were not affected by the flooding.

The power lines are on the ground and are covered in water, leaving them unable to work on the poles.

“Since we’re in Florida there aren’t many strategic places you can place power lines,” he said, “unfortunately all the lines can’t be on hills.”

Dyal said there’s no timetable for having all of the power restored because the waters are still rising in the area. Weather will be a major factor in how long the process will take.

Residents have complained about the situation, Bill Wilson said, blaming everyone from the electric companies to engineers to the city counsel.

“The only person here to blame is mother nature,” he added, “they knew the risk of flood when they bought the properties.”

He said the residents can’t expect the power companies to restore power so quickly since it can put their employees in danger.

Wilson said the owners of the homes should know the nature of the area they live in.

Wilson said since Samson City is such a small community, everyone either knows each other or knows of each other. He said the connection made it impossible not to help his neighbors.

Residents whose homes were flooded are either in one of the three shelters in the county, First Baptist Church, Madison Street Baptist Church and Starke Elementary, or they made their own accommodations.

Bob Sabia, whose house was damaged in the storm, evacuated to Gainesville to stay with his daughter.

Sabia, a retired railroad worker, said once the flooding is gone from his yard he will return to his home. Despite having part of his home damaged, he was able to maintain a sense of humor about the situation.

“I’m going to be fixing my house myself,” he said. “If I can salvage any tools that is,” he said with a laugh.

The corner of his home was damaged by a fallen tree. There is damage to the roof of his home as well as the foundation. The tree also caused a power line to collapse, leaving his home without power.

He came back to Bradford to collect his mail and to check if any of the flood waters had receded in his yard.

“I knew I probably couldn’t come back when I couldn’t get through the waters with my tractor,” he said, “I wish I still had my house boat.”

RJ is a reporter from WUFT News. He reports on news from the zip code 32605. He can be contacted at 954-294-9424 or rjsonbeek15@gmail.com. Follow him on twitter @RJ_Sonbeek
@https://twitter.com/RJ_Sonbeek
Previous Florida Wildlife Care Becomes Refuge For Injured Animals After Hurricane Irma
Next Flooding Still A Problem For Robin Lane Residents