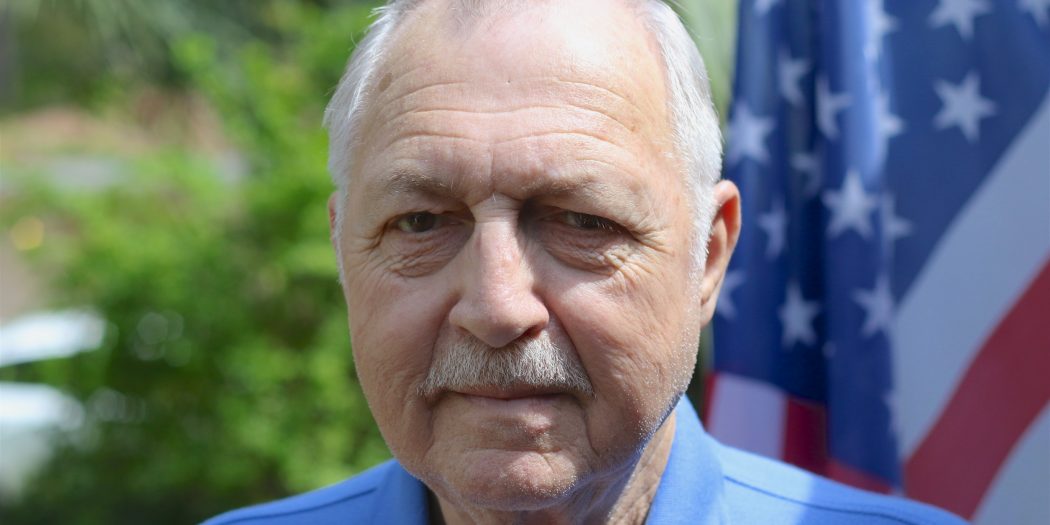 While much of the United States population had by 1971 turned against the war in Vietnam, as well as many of those who fought it, John Lavelle experienced a touching piece of support from his daughter’s fifth-grade class. They collected food and other necessities to support orphanages in the Asian country as America’s involvement there moved into its second decade. Lavelle now lives in Gainesville and is a member of the Vietnam Veterans of American Chapter 1092 Alachua County. Our conversation took place at the group’s monthly meeting on Aug. 28, 2017, at American Legion Post 16 in Gainesville.

How long have you lived in Gainesville?

Came here in 1966 when I was stationed at the University of Florida on ROTC duty.

Graduated with a bachelor degree in criminal justice and public administration.

Can you tell where you were and how old you were when you first heard about the Vietnam war?

Well basically, I was in the service. I enlisted in January 1955. I spent 20 years. I was in the military when it went on.

Where did you serve and for how long?

In Vietnam? I went over to Cam Ranh Bay and was there from August 1971 to May 1972, when we closed Cam Ranh up. From there I shipped out to Tan Son Nhut, the Air Force headquarters.

How did your parents feel about it?

Well, I was already in the military for 15 years 16 years or so when I went over. They really, we didn’t discuss it.

When you arrived in Vietnam what was your response to the country itself?

Coming in, it was beautiful flying over the country. However, as we approached Cam Ranh Bay, the bomb dump had been attacked the night before and it was still going off — bombs going off. They had them in revetments — about 10 of them — and if a missile would go off or a mortar would go off and one would go into the other one, then it would set that one off, so they kept blowing up for about three days. So it was quite a welcome.

I was going to say that was right when you landed so what was your reaction to all of that?

Where am I? Why am I here? That type of thing. And basically, Cam Ranh in years past had been a very safe base. They had a big hospital there and everything. It had only been hit once before I arrived and of course, the day before I arrived.

What were some of your responsibilities when you first arrived?

I was in charge of the computer operations which handled all computer data on the base including intelligence from the planes that were going out and coming back in. We’d process the information and disseminate it as we needed to.

Did that responsibility change over time while you were there?

No, basically not until we started closing down. Then, of course, we went from full blown operation to almost nothing. Then we started shipping documents out, shipping out the machines, computers and so forth. The last month we kept coming under more attacks because our perimeter started shrinking as we shipped out more people. I was in the last 2000 people that were on the base.

Did you lose anyone in your unit?

We got hit by mortars several times, our building did. Mainly at night time, that’s when they were hitting us. We never had anybody killed in the building, but we did have some wounded. I was lucky I was not there when the mortars went in.

How did all of that affect you?

Can you explain some of the ways it changed you, your attitude towards maybe this country?

No, not really. I was fully in tune with us going over there and I just wish that the population would have been more with it. I believe that because of the TV constantly being in front of the people was what turned (them against the war).

That was actually going to be my next question, is what are your memories of how the nation treated Vietnam veterans when you got home?

Let me go back a little before I went even. I was stationed here at the University, ROTC duty and we had a lot of the Students For A Democratic Society breaking our cadet ranks as we had the cadets there. They came in one time and took over our building, and the university police did nothing about it. We weren’t allowed to touch them. So I had that happen before I went over. When I came back because my family was here in Gainesville, I just challenged them. I put on my uniform, walked down University Avenue, and nobody said a word to me. I was glad.

What is something that you learned that you carry on with you now forever?

Well, the fact that the population was so much against it and a lot of the veterans that were over there, me included, did not like talking about it — things that happened.

Now while I was over there… our unit used to go to the orphanages. They had the Catholic orphanages, Protestant ones and all different faiths were raising children over there. It was tremendous because of the combat zone, and they were doing what they could with meager things, belongings, food, clothes. As we went over, I went basically as a guard on the truck bringing supplies in. There were four of us on each truck carrying a rifle. Seeing that, I wrote back to my family, to my wife and she read the letter to my children and my daughter who was in about the fifth grade at the time here in Gainesville, she went to school the next day and told her teacher about that we were going to orphanages and trying to get clothing, food, money whatever we can to help them and they made that a class project and they did it for about six months. After about a month they would start shipping packages over to me. We’d get the packages and once a week we’d take them to the orphanage. I thought that was great.

What was your reaction when you got on the plane to come back home to your daughter and your family?

It was wonderful. Everybody on the plane, all at once just broke out a song similar to we are getting out of here and it’s time to go and so on and so forth. So it was a wonderful feeling. Now I had been home… I mentioned we closed up Cam Ranh Bay while I was there and they airlifted us out in the middle of the night because we had lost all communication with Saigon, and I went up Tan Son Nhut, I was there a week and got a message from the Red Cross that my wife was going to have surgery. So I came home on emergency leave, got home, spent thirty days here and then I had to go back even though she was still recuperating. So going back the second time was bad knowing what I was going back into and Tan Son Nhut at that time was on curfew because we kept getting hit every night and if you went downtown you had a chance of getting killed. When I left the second time it was wonderful, really wonderful. I knew I was going home forever.