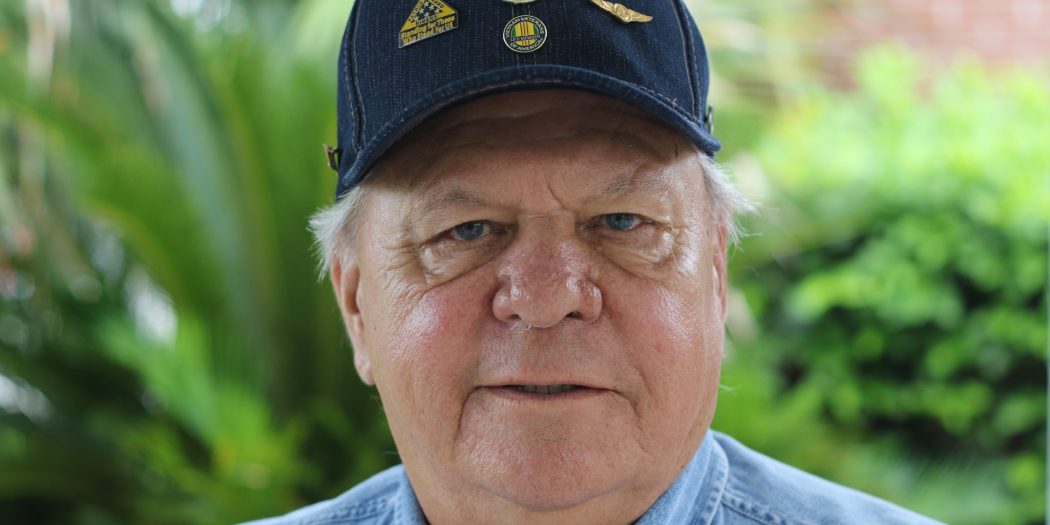 Bruce Lamoureux didn’t serve in country during the early years of the conflict in Vietnam, but his work aboard a ship in the South China Seas gave him a perspective on Navy operations as an enlisted man. He serviced airplanes before they took off and after they returned, serving a span of seven years on active duty. Today, he’s the president of Marion County Chapter 1085 of the Vietnam Veterans of America. Our conversation took place Aug. 16, 2017, at Veterans Park in Ocala.

I was born in Duluth, Minnesota, in 1942. I was raised in Minnesota and joined the Navy when I was 17.

Do you remember the first moment you heard about a conflict in Vietnam?

No, I really don’t remember the first time. It obviously would have been in the early 1960s, but in that time, it would have been something far off in the distance. I was only 17, 18 years old at the time, so it didn’t really register on me as to what it was, where it was or anything.

Were you drafted or did you volunteer?

Where did you do your training?

I first went to boot camp in San Diego. I was there for three months, then to Naval Air Station in Jacksonville to what was called an A-School to learn to be an aircraft electrician. I left there,  went back out to California and went to a school on the electrical systems of the FAU Crusader. From there, I was flown to Okinawa and caught the USS Ranger, which was coming back to the states. That was about the first year and a half of my career.

At what point did you arrive in country in Vietnam?

I actually was never in country. I was on an aircraft carrier in the early 1960s in the South China Seas.

What were some of your responsibilities on the carrier?

My job at that time was called checkered shirt on the flight deck. During launch and recovery operations, I worked with the pilot of the aircraft — we were flying fighter aircraft — as to any problems with the airplane or stuff we needed to know about to do repairs.

Did your responsibilities change?

Not so much. I also was an aircraft maintenance person. When we weren’t doing launch and recovery, I had to do work on the airplanes.

Did you get a sense of when the conflict started to heat up?

Not really. I was very young at the time. We just didn’t have a feeling for what was going on with world politics or anything. We were told to do a job, trained to do a job, and we did our job.

When we came back in the mid-‘60s, one of the things the base commander told us was to not wear our uniform off the base. At that time, I was at the naval air station in Moffett Field south of San Francisco. We all looked at each other and said, ‘What in the world’s that about?’ Obviously, the demonstrations at that time were starting. They weren’t ramped up to what they became later on in the ‘60s, but that was what it was all about. The military was trying to protect us from the protesters and everything at that time.

Did you have any opinions about the protesters?

We felt: ‘What in the world’s going on?’ We were given a job to do. We did our job and couldn’t figure out why people were against us.

Did the war or your service change you at all?

I don’t know that it changed us. I think afterwards, it changed us. As we started to learn more about the politics of it and all of that, especially in recent years, we kind of look back now on it and shake our heads and say, ‘What the hell was that all about?’

…in that era, all of our politicians in the United States thought they could solve the problem, and now we know they couldn’t.

Why do you shake your head?

The politics of war, especially that war. And we had a lot people that blame the Republicans, other people blame the Democrats. The fact is I served under four different commanders at the time — Eisenhower, Kennedy, Johnson, and Nixon — two Democrats and two Republicans. I don’t think to this day, now that I’m 75 years old, that it was a particular party’s problem. It was a political problem. And why were we there in the first place? Who knows. We were battling communism. Turns out, and we didn’t learn it until many years later, communism collapsed inward. They really didn’t need us to help collapse it. It collapsed on its own. That’s the problem with communism and socialism; it never has worked, it doesn’t work now, and it never will work. But at that time, in that era, all of our politicians in the United States thought they could solve the problem, and now we know they couldn’t.

When did you make it to Florida?

Not until the mid-‘80s, and I was out of the service then. I was all over the country in the military — couple years in Rhode Island, couple different places in California.

After the military, I got into the horse business. That’s how I ended up here in Marion County — managing horse farms and training horses. I retired about six or seven years ago, and now I have nothing to do except work with veterans, and that’s what I do.

How did you first get into this pursuit with local veterans?

We were just having this conversation a little while ago. When I first retired, I played golf every day. After a year of that, I got tired of that, and said now what am I going to do? I joined a group called the Patriot Guard Riders. We do a lot of funerals and so forth for veterans. Then I got involved with the Vietnam Veterans of America and the local chapter. All of a sudden, I’m the president of the local chapter. Now I spend a lot of time here at the Veterans Park. We do a lot of celebrations here for veterans. Personally, it’s the most gratifying thing I’ve ever done in my life — to help veterans.

How does that manifest itself day to day?

All of it. All of it. We find a veteran in need, we do whatever we can to try to help him, whether it’s financial need or emotional need or stuff like that. We try to assist families, maybe a veteran that’s having health issues. I’ve got a neighbor right now, a World War II and Korean War vet, who was in a hospital and now in therapy. I take his newspaper to him every day, watch out for his house. Things like that. It’s an everyday thing now. We find a veteran in need, and we try to help them.

When was this chapter in Marion County established?

Originally, it was back in the early ‘90s, but it collapsed inward. We formed this chapter about four years ago, and we’re fairly active. The problem that we have is in the summer, so many of our members are snowbirds or on vacation, so we don’t even have meetings in the summer anymore. We tried and couldn’t get anybody. From October to May, we have meetings and try to raise money for various veterans causes. We support the Ritz, a homeless veterans facility, and several other causes.

But I’m just a soldier, sailor, airman — whatever you want to call me — that served his country and would be willing to do it again.

Did you follow the efforts into the 1990s to get a memorial established in Washington D.C.?

I did. I wasn’t actively involved in it. I am now. Matter of fact, we are working on getting the traveling Vietnam Memorial Wall brought right here to this park. It’ll be next May some time. We’re not ready to announce the dates yet. We’re hoping we’ll get a lot of people in Marion County excited.

One of the things a lot of people don’t know or understand is there are 45,000 veterans in Marion County. The majority of them would have to be — just looking at the ages and population — Vietnam-era veterans. We think bringing the Vietnam Memorial Wall here (will be good).

We have about 45 members right now.

What haven’t I asked about Vietnam that you think people should know?

I don’t know that I am one to comment one way or the other on what people should know. But I’m just a soldier, sailor, airman — whatever you want to call me — that served his country and would be willing to do it again.

The family couldn’t have predicted that their world would be turned upside down when Category Four Hurricane Ida barrelled through Lousiana on Aug. 29.