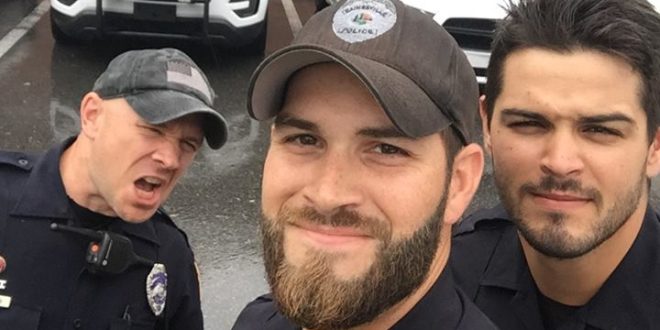 Gainesville police are reviewing a complaint against one of the three officers seen in what has become known as the “hot cops” photo.

The officer, Michael Hamill, is the one in the middle of the photo, which has gained national attention after it was posted Sunday to the Gainesville Police Department’s Facebook page.

“Several citizens have brought information to our attention regarding a complaint against Officer Hamill,” police spokesman Ben Tobias wrote in a news release.

Tobias doesn’t note in the release if Hamill being in the photo prompted citizens to contact police.

Tobias said he won’t be releasing further information because of confidentiality requirements for complaints under Florida law.

Michael is an editor who can be contacted by calling 352-392-6397 or emailing news@wuft.org.
@Michael__Stone
Previous Police: Post-Irma Line Cutter At Ocala Gas Station Slams Employee
Next Greener Pastures In Sight For Alachua Horse Sanctuary After Irma