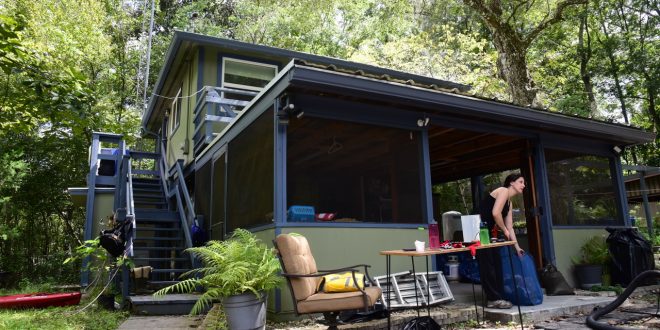 UPDATE: Officials No Longer Anticipate I-75 Shutdown After Irma

By Michael Stone and Jacob Best

The Florida Department of Highway Safety and Motor Vehicles provided this map showing the closure and detour routes around it: 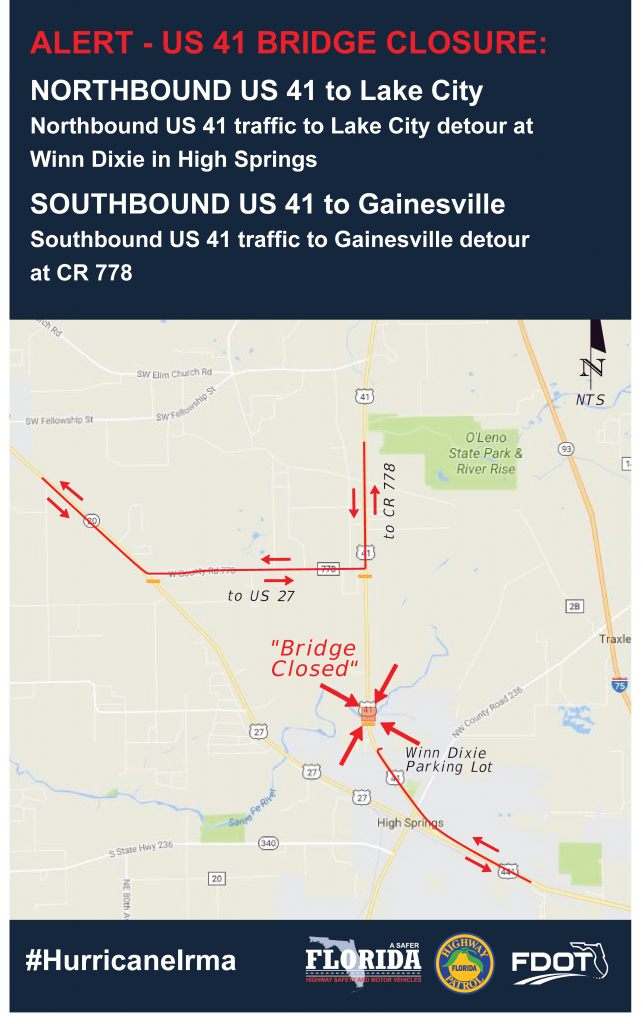 A portion Interstate 75 is no longer expected to be shut down, Bradford County Emergency Management announced this morning.

“Waters expected to flood over I-75 have begun to recede,” said the announcement, which comes a day after officials described the closure as “likely” and had suggested motorists begin taking detour routes, if possible, to avoid a portion of the road north of Gainesville.

The Alachua County government has issued a mandatory evacuation for those in the flood plain adjacent to the Santa Fe River.

That includes those living on properties adjacent to creeks, rivers and streams north of Northwest U.S. Route 441 in High Springs, Lacrosse and the city of Alachua.

For those evacuating the flood plain, the county has three available shelters:

A bridge section of U.S. Route 27 in High Springs has been closed because of flooding on the Santa Fe River, according to the Florida Department of Transportation. FDOT provided this map to show detour routes: 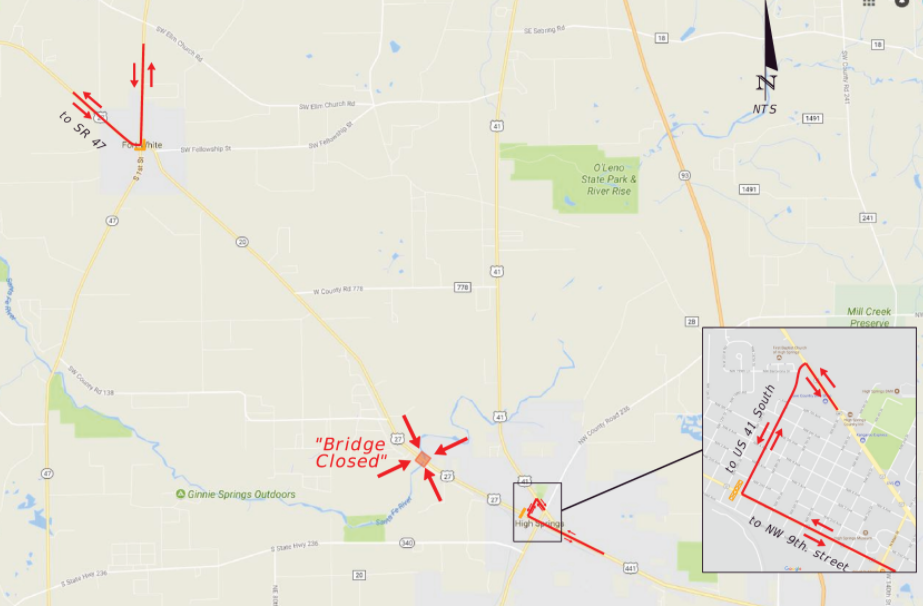 Florida transportation officials are preparing for the likely closure today of Interstate 75 north of Gainesville as waters from the Santa Fe River are expected to continue to rise and make the road unsafe.

The closure would be for all I-75 lanes between Interstate 10 to the north and U.S. Route 441 to the south, and it would surely cause further traffic nightmares for Hurricane Irma evacuees returning home on the already-clogged roads.

As of 1:20 p.m. today, no closure or accompanying time has been announced, according to the Suwannee River Water Management District.

But the Florida Department of Transportation is recommending drivers already start avoiding, if they can, the impacted section of I-75.

The bridge of concern — a small one at mile marker 408 at the Alachua-Columbia county line — is being monitored around the clock by FDOT to make sure it’s still safe to drive over.

“The river levels aren’t threatening to come over the bridge, but … the potential threat is they may rise up to the lower structure part of the bridge,” Tom Mirti, division director of water resources at the Suwannee River district, told WUFT News by phone.

Mirti said he’s unsure of how long I-75 near the bridge would be closed if the water does rise to a threatening level.

FDOT is suggesting two major detour routes using U.S. Route 19 to the west and Interstate 95 to the east — the latter of which is for those traveling to Central or South Florida. Mapped out, the routes are: 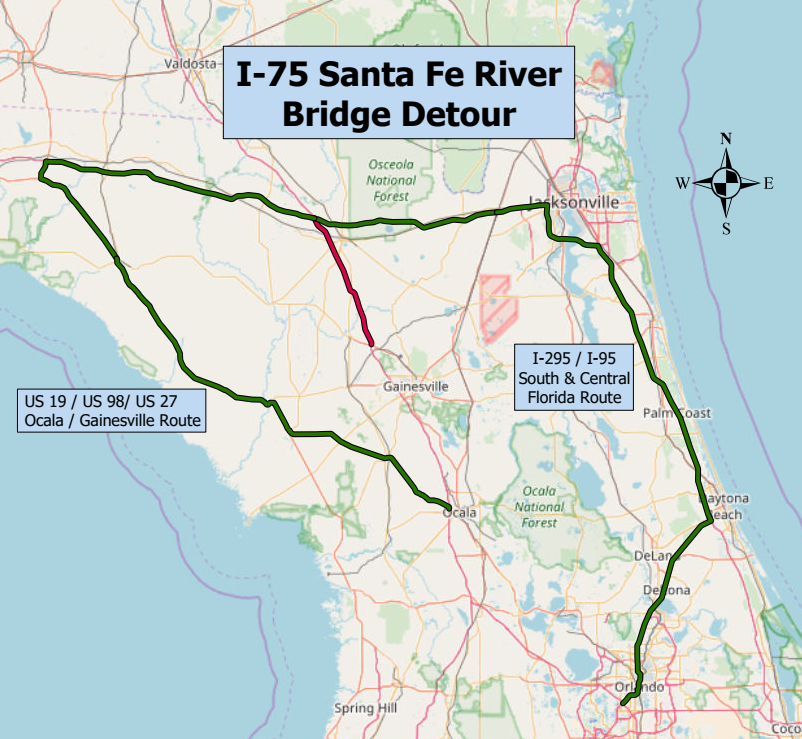 The Santa Fe’s floodwaters are expected to peak sometime Thursday, but the river has already risen 15 feet over the past day and half from Irma rains, according to FDOT.

Other bridges could also be impacted by the floodwaters, officials said. They include those along U.S. Routes 27, 41 and 121, and State Routes 27, 47 and 129 — any or all of which could see detours or closings.

The rise in water on the river is “historic and unprecedented,” an emergency warning from Gilchrist County officials said. It prompted the National Weather Service to issue a flood warning for Columbia, Gilchrist and Suwannee counties.

Near Fort White in Columbia County, water levels are expected to climb to 35.4 feet, “which is near the 100-year flood elevation level of 36 feet … and higher than the last recorded highs during Hurricane Dora in 1964,” according to the Suwannee River district.

Residents and business owners along the Santa Fe should figure out a way to get off their property so they don’t become trapped by the rising waters, Mirti said. They should also remove items of value, including trailers and other heavy items because they could be swept away.

Two people who live along the Santa Fe, Cora and Michael David, are worried about the problems the quickly rising waters will cause.

Their home, in High Springs, was built along the river in the 1960s and thus prior to modern flood standards. When they saw Irma coming, they knew an influx of water was possible, so they moved most of their things into their storage shed.

But now, as the river extends its banks, the Davids are moving even more into the shed, anything of any value.

“It’s pretty surreal,” Cora David said. “We’ve been working really hard to get all of our possessions out, as much as possible, especially the things that matter.

“Most of all, I’m bracing myself for the after part, when the water pulls back, because everything’s going to be destroyed.”

During the flooding, they plan to stay in a guest house on higher ground elsewhere on the property.

Michael David said he expects between 3 and 4 feet of water in the main house by tonight — and even more over the next couple of days.

“We moved here for the rivers,” he said. “We cave dive all the time. I’m always on the rivers fishing and boarding. This sucks, but it’s part of it, I guess — the price to pay to live on the river and enjoy the rivers around here.”

Michael is an editor who can be contacted by calling 352-392-6397 or emailing news@wuft.org.
@Michael__Stone
Previous Hurricane Irma Wrecks Tourist Spots In Caribbean, Spares Disney
Next 4 Motels In 5 Nights: Life On The Run From Irma