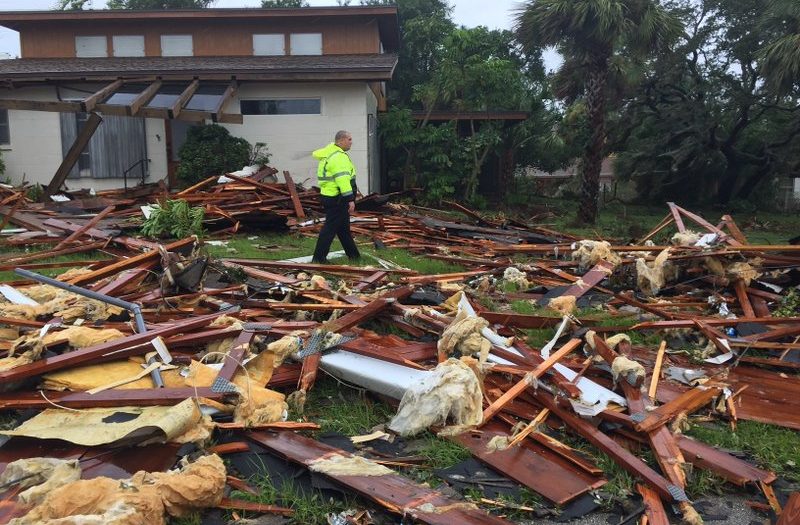 Palm Bay officer Dustin Terkoski walks over debris from a two-story home at Palm Point Subdivision in Brevard County, Fla., after a tornado touched down on Sunday, Sept. 10, 2017. (Red Huber/Orlando Sentinel via AP)

Florida was approved Sunday for federal disaster relief as the powerful, wide and deadly Hurricane Irma made its second landfall of the day.

And the system might still be more than a day from leaving the state.

The announcement came after Irma made its second Florida landfall on Marco Island, a barrier island south of Naples in Collier County, at 3:35 p.m. Irma came ashore as a Category 3 storm, with 115 mph winds.

Irma had earlier made landfall about 9 a.m. at Cudjoe Key — less than 30 miles northeast of Key West — with maximum sustained winds of 130 mph. Water was reported to be covering U.S. 1 in Monroe County.

By 5 p.m., Irma had weakened to a Category 2 storm, with 110 mph maximum sustained winds. At the time, the storm was located about 5 miles north of Naples. The system had picked up its pace, moving north at 14 mph.

The National Hurricane Center reported the potential for storm surges of 5 to 15 feet along the Gulf Coast.

“The deepest water will occur along the immediate coast in areas of onshore winds, where the surge will be accompanied by large and destructive waves,” the center said in the 5 p.m. advisory.

Most had occurred across South Florida, according to Florida Power & Light, which was reporting crews working to restore power Sunday morning as far north as Manatee and Brevard counties.

FPL noted that more than 350,000 outages had already been restored, but that “full restoration efforts will not begin until tomorrow(Monday) given Irma’s movement has slowed considerably; as a result, customers should plan for significantly prolonged outages.”

Irma had slowed to a 9 mph pace as it went through the Keys on Sunday.

Trump’s approval of a major disaster declaration allows federal money to be used to reimburse the state and local communities for expenses tied to such things as emergency operations centers, evacuations, sheltering and debris removal.

“As Hurricane Irma moves through Florida, Gov. Scott will work with President Trump and FEMA to approve more funding to additional communities affected by the storm,” the governor’s office said.

Scott had placed all of Florida under a state of emergency Monday.

At least three deaths have been attributed to the storm.

One death occurred in a crash in the Keys.

Meanwhile, in Hardee County, sheriff’s Deputy Julie Bridges, a 13-year veteran driving home after working at an evacuation shelter, and Sgt. Joseph Ossman, who had been with the Florida Department of Corrections for 21 years, both died in an early morning head-on crash.

Among other developments Sunday:

— The state reduced the number of people reported to be in shelters.

After announcing more than 127,000 people were in the more than 460 shelters opened throughout the state Sunday morning, the numbers were later posted at 116,000 in 530 shelters.

Another 75 shelters for people with special needs had received 12,700, a number up 700 from earlier Sunday.

— All public schools, state colleges and state universities and state government offices have been ordered closed on Monday. A number of county school districts, where schools have been converted into shelters, will remain closed later into the week.

— There will be no Florida Lottery drawings during Hurricane Irma.

“Makeup daily drawings will take place as soon as possible after the potentially catastrophic impacts of Hurricane Irma have passed,” the lottery said in a prepared statement. “Players already holding tickets will still be eligible to win.”

— All Florida seaports except the Port of Pensacola had been closed by the U.S. Coast Guard.