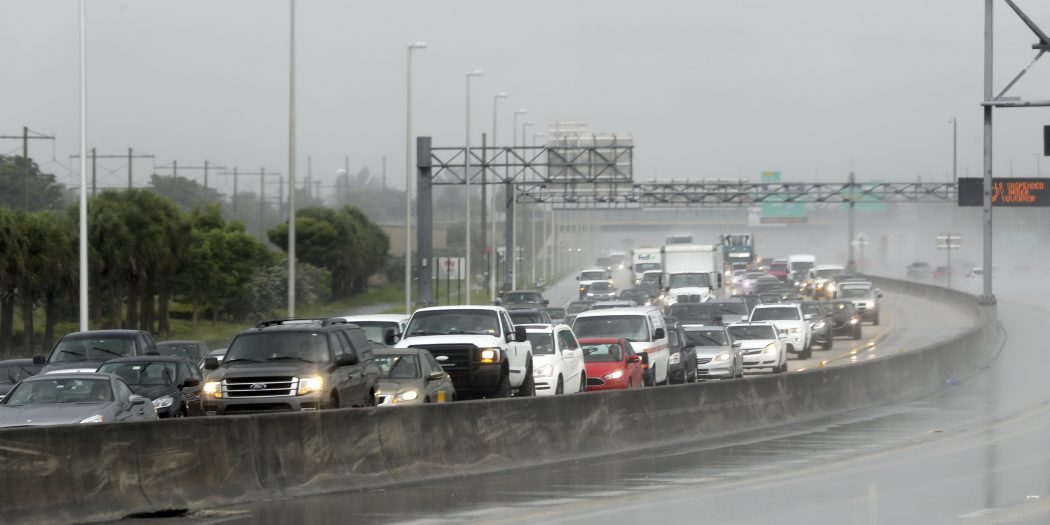 Northbound traffic on the turnpike near Sunrise Boulevard sits in the rain Thursday in Sunrise, Florida, ahead of Hurricane Irma. Irma cut a path of devastation across the northern Caribbean, destroying buildings and uprooting trees on a track that could lead to a catastrophic strike on Florida. (Mike Stocker/South Florida Sun-Sentinel via AP)
Home / Law and public safety / Floridians Urged To Remain `Vigilant’ As Irma Approaches

Almost all of Florida will be directly affected the next couple of days by deadly and powerful Hurricane Irma, Gov. Rick Scott warned Friday.

Meanwhile, President Donald Trump issued a video message advising people in the storm’s path to be “vigilant” and to “heed all recommendations from government officials and law enforcement.”

“When the time comes, we will restore, recover and rebuild together as Americans,” Trump said.

Public schools, state college and universities and state government offices were shut down across Florida on Friday and will remain closed Monday.

Power outages are expected to be widespread from the storm, which is now forecast to run up the state, initially including three of Florida’s most populous counties.

More than 500,000 people have been ordered to evacuate South Florida, and evacuations are being issued to low-lying areas along both coasts.

Despite the state lifting restrictions and providing law-enforcement escorts for gas trucks on state roads, the supply of fuel — already in heavy demand — is expected to slow Saturday in South Florida after Port Everglades is shut down for safety reasonsFriday night.

“This storm is wider than our entire state. It is expected to cause major and life-threatening impacts from coast to coast,” Scott said Friday while at the South Florida Water Management District headquarters in West Palm Beach. “Remember Hurricane Andrew was one of the worst storms in the history of Florida. Irma is more devastating on its current path.”

Scott advised coastal residents to evacuate immediately after being told to do so and to go inland. He also ordered the mandatory evacuation of seven communities — South Bay, Lake Harbor, Pahokee, Moore Haven, Clewiston, Belle Glade and Canal Point — south of Lake Okeechobee.

The U.S. Army Corps of Engineers anticipates excessive winds will push waters from the lake over the Herbert Hoover Dike. The dike itself isn’t expected to be at risk, Scott said in relaying information from the Army Corps.

With fuel at a premium and gridlock on many major highways, hundreds of thousands of people have already left their homes to go to shelters or to travel to northern Florida or to other states.

“I know many of you are stuck in traffic. I’m sure it’s very frustrating, but please be patient,” Scott said. “Evacuations are not convenient, but they are absolutely meant to keep you safe.”

Tolls have been lifted statewide, and Florida’s highway Welcome Centers near the state borders have been converted to provide information to people seeking safe places to go.

By the end of Friday 7,000 members of the state National Guard will have been activated.

In addition to Scott’s order to close schools and state government offices, the University of Florida and Florida State University became the latest to cancel home football games planned for Saturday.

A major storm with maximum sustained winds at 150 mph as of 11 a.m. Friday, Irma is forecast late Saturday and throughout Sunday to travel north up the peninsula.

A hurricane warning — which signifies impacts expected within 36 hours — is in effect from Jupiter Inlet south around the Peninsula to Bonita Beach and includes the Florida Keys, Lake Okeechobee and Florida Bay.

A hurricane watch is in place from north of the Jupiter Inlet to the Flagler/Volusia County line and from Bonita Beach to the Anclote River near Tarpon Springs.

The Port of Key West has already been placed under condition “Zulu” by the U.S. Coast Guard, indicating gale-force winds within 12 hours and no inbound and outbound traffic.

PortMiami, Port Everglades, Port of Palm Beach, Port Canaveral and Port of Ft. Pierce, are under condition “Yankee,” meaning gale-force winds are predicted to arrive within 24 hours, with no more inbound traffic and vessel traffic-control measures on movement within the ports.

Port Tampa Bay, Port Manatee, Port St. Pete, JAXPORT and Port of Fernandina are at “X-ray,” which allows operations to continue, but sustained gale-force winds are expected within 48 hours.

The state has already closed 53 state parks, and another 79 will be shut down at 5 p.m. Friday.

Early Friday, Scott retweeted Miami rapper Pitball, a former paid ambassador for the state’s tourism industry, who stated, “Florida residents & visitors, please be diligent. Evacuate where needed. Be safe. We will be back bigger, better, stronger.”

After announcing Thursday that insurance companies are prepared to meet Floridians’ needs after Hurricane Irma, state Chief Financial Officer Jimmy Patronis advised residents on Friday to keep copies of their policies and to document their personal property to effectively get claims processed.

“If you have a smart phone, go take pictures inside your house of your personal belongings, or a video,” Patronis said Friday. “Then, email it to yourself. Put it somewhere virtually, so you can have a copy of it.”

Jim Turner is a reporter for the News Service of Florida, a wire service to which WUFT News subscribes.
Previous White Nationalist Could Speak Oct. 19 At UF
Next Gainesville Companies Bracing For Debris Ahead Of Irma