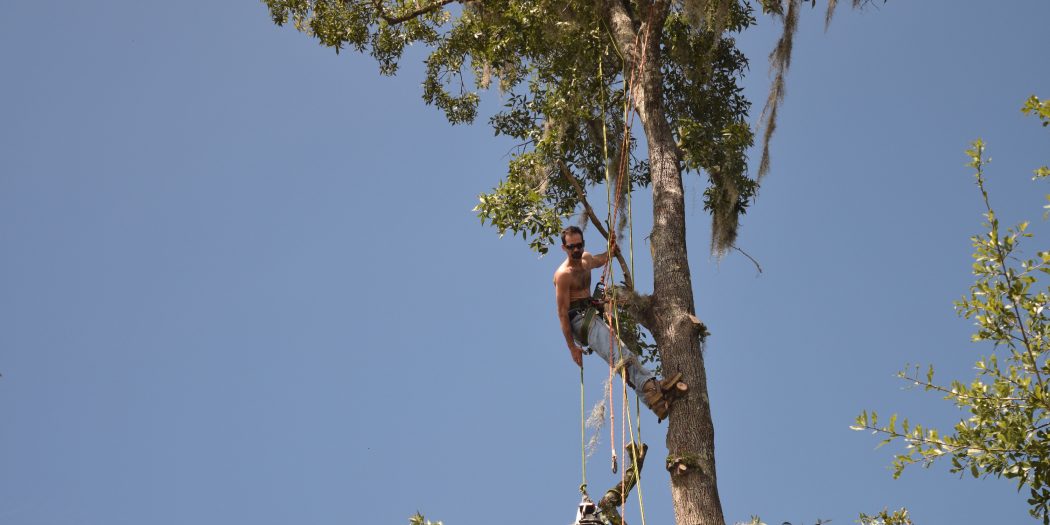 Tree Trimmer Climbs Ahead Of Irma

David Giles scurries up a pine tree with Tarzan-like speed, clutching a rope with one hand and a chainsaw with another.

With Hurricane Irma headed toward Florida, the Gainesville tree cutter has been swamped with phone calls from residents requesting to have trees trimmed around their houses.

He’s been answering the calls with his cell phone, which is attached to his tool belt, even while chopping off limbs from the top of trees.

“I’ve had 26 requests for estimates on tree removals in just the past two days,” he said. “A lot of people have called for concerns because of the storm coming. It seems like everybody has waited until the last minute.”

Though he’s the owner of Giles Tree Service, the influx of customers has taken him back to his roots.

“I’m the owner usually doing estimates, but during the storm, it’s hard to get climbers,” he said Thursday from the backyard of a northwest Gainesville home. “I had to go back to climbing again.”

As the deadly storm approaches the state, Floridians have been tending to their branches, one of the biggest threats during such a severe storm. Strong winds can blow loose or broken limbs onto cars, through roofs, across power lines and onto people, so the preparation needs to be done beforehand, by the homeowners or professionals like Giles.

But before they decide to cut, homeowners should consider the tree species, said Lacy Holtzworth, Gainesville’s city horticulturist and its interim city arborist.

In fact, some — such as older, stronger oaks — may actually shield structures from damaging winds.

“Some trees are incredibly beneficial to us here in the city, but others — the ones that have shallow roots and weak structure — can be problematic,” Holtzworth said.

Troublesome types include tall pine trees, water oaks or any tree with weak limbs because they’re more likely to fall, she said, so residents should avoid parking their cars underneath them.

“If you have water oaks in the vicinity, they are definitely a potential threat,” Holtzworth said.

But regardless, all species are potentially dangerous, she said. “Debris will be coming down, no matter what kind of trees you have.”

To help make Alachua County yards a little safer, Giles has been working from sun up to sun down ahead of Irma.

Frank Piccione watched from his driveway Thursday as Giles climbed and cut a pine tree. Piccione had another company take branches off a tree by his house and said he is glad to see others in the neighborhood being trimmed.

“They’ve had problems before with the branches falling down,” he said, “so it’s a good idea.”

As Giles made his descent from what was left of the tree, he tossed his chainsaw in the grass and doused himself in cold water from the homeowner’s garden hose.

He looked at the remainder of the tree and estimated it to be about 40- or 50-feet tall.

Giles expects to keep cutting until the weather grows severe.

“As long as it’s not lightning or pouring,” he said. “Sprinkling? It’s okay.”

Darcy Schild is a University of Florida journalism student and reporter for WUFT News. She can be reached at darcyschild@gmail.com or at 419-239-9411.
@darcyschild
Previous Florida Price-Gouging Hotline Receives 3,000 Irma Complaints
Next White Nationalist Could Speak Oct. 19 At UF