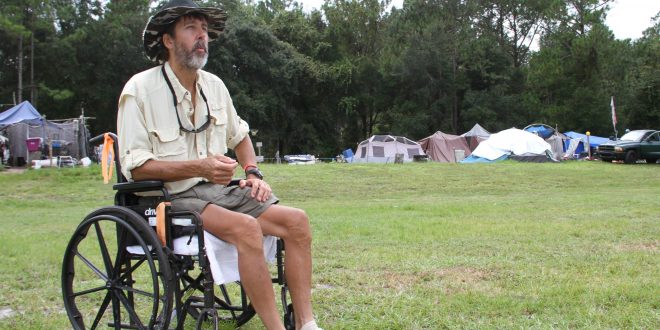 Mark Venzke at Dignity Village in Gainesville on Wednesday. Alachua County Commissioner Robert Hutchinson is planning on welcoming Venzke and four of his friends into his home starting Friday to ride out Hurricane Irma. (Cameron Cobb/WUFT News)

Robert Hutchinson first welcomed Mark Venzke into his home about a year ago.

The Alachua County commissioner doesn’t feel uncomfortable hosting a homeless person but rather considers it a rewarding experience.

“It’s what everybody should do,” Hutchinson said of welcoming people in need.

Venzke, who has bone-marrow cancer and is wheelchair-bound, has since stayed at Hutchinson’s house several times — and he’s planning to return on Friday, this time with four friends who are also homeless.

“I encourage people when they need respite — whether it be from bad weather or a medical issue or whatever — to reach out to me. And if I can accommodate them, I do,” said Hutchinson, who first met Venzke about a decade ago when Venzke participated in local government meetings as a community activist.

On Wednesday, from Gainesville’s Dignity Village tent camp, where he lives, Venzke said of Hutchinson, “He has been very hospitable.”

Venzke and the others will be staying at Hutchinson’s house to ride out Hurricane Irma, the Category 5 storm wreaking havoc in the Caribbean that’s expected to reach North Central Florida this weekend.

Homeless shelters around the region have been setting out their emergency plans in advance of Irma, including Gainesville’s GRACE Marketplace and Dignity Village, which neighbors GRACE and has about 200 residents.

GRACE is planning to provide 24-hour access to its buildings for the homeless as they seek a safe spot during the storm.

But the available space there and elsewhere might not be enough, so Hutchinson is encouraging others to also invite those in need into their homes.

To prepare for the hurricane and his guests, Hutchinson said he stocked up on water, food, candles, flashlights and other supplies. He won’t have to do much rearranging, though.

“I have a somewhat peculiar house, and it has a lot of space,” he said. “So it’s easy for me to set up half a dozen beds.”

He also noted that his house has special accommodations, like a handicap-accessible toilet.

Venzke said he stays at Hutchinson’s house about once every six weeks, especially during unfavorable weather conditions that jeopardize Dignity Village and the many trees towering over its tents.

“The trees provide some great, welcomed protection from the oppressive sun,” Venzke said. “But in a wind event, they could be deadly.”

Jon DeCarmine, GRACE Marketplace’s director, emphasized the importance of the homeless getting out of the storm because of falling trees.

In September 2016, during Hurricane Hermine, a tree fell on a Marion County homeless man’s tent, killing him.

A severe storm “becomes a much more severe issue if you’re worried about if your house or tent can literally blow away,” DeCarmine said. “If a tree falls on your tent, that could kill you.”

For those wanting to help the area’s homeless population in ways other than providing housing, Venzke suggested assisting with tree removal in the aftermath, or offering replacement tents or a place to do laundry.

“Come by the day after [the hurricane] and just engage in conversation,” Venzke said. “Moral support makes an unusual amount of difference if you’ve ever been in a stressful situation.”

Still, Hutchinson emphasized that the best way to help is to open up the front door.

“Once you’ve sorted out your own situation, then it’s time to start thinking about others,” he said. “That’s the spirit that you need to have during a hurricane.”

Cameron is a reporter for WUFT News and can be contacted by calling 850-207-0517 or emailing cameronacobb5@gmail.com.
@cameronacobb5
Previous Ahead Of Irma, Florida Farmers Seek Shelter For Cattle
Next Florida Sees Fuel Shortages, Traffic Jams Ahead Of Irma 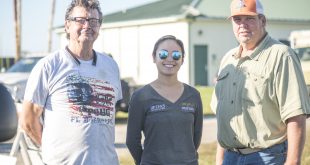