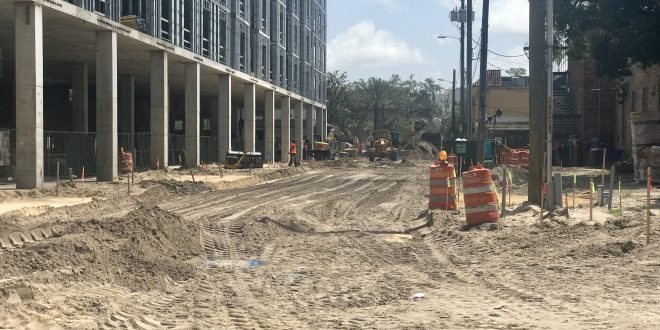 Northwest First Avenue and Northwest 18th Street on Wednesday. The Gainesville Community Redevelopment Agency expects to now finish the road and others in Midtown by late October instead of the original goal of Sept. 8. (Julianna Musumeci/WUFT News)

Completion Of Midtown Construction Pushed Back By 2 Months

The completion date of construction in Gainesville’s Midtown area has been pushed back by two months because of labor shortages and unforeseen underground complications.

The construction, named the “More in Midtown” project, was originally scheduled to be finished by Sept. 8 for the University of Florida football home opener, but planners are now expecting to be done in late October.

“You never know what you find when you open up a road,” Project Manager Sarit Sela said of the underground issues contributing to the delay. “There’s a lot of … situations where tree roots were tangled in old facilities we had to help fix, and many surprises we found underground.”

The labor shortage stems from Gainesville having many other construction projects during the summer, Sela said.

The project is meant to improve degraded roads in Midtown, a section of the city across the street from UF comprising mostly restaurants and bars and the adjacent houses and apartments.

The roads under construction include Northwest First Avenue and those between Northwest 16th Street and Northwest 20th Street.

All underground work is complete, Sela said. The next step is to add pavement to the roads and sidewalks.

The project, led by the Gainesville Community Redevelopment Agency, began in January.

To minimize business disruptions, the CRA has been working on the project one lane at a time, meaning the parallel ones have remained open.

The road closures have been a major concern for businesses near the construction sites because of the lack of parking and the detoured walking routes, said Sela and Klajei Kola, owner of The Spot restaurant.

The Spot has seen a noticeable drop in revenue since June, the month construction started on its block, Kola said.

“People cannot even walk because they blocked the [sidewalks],” he said.

UF student Emily Arnold, a Midtown resident, said the construction has impacted her house at the intersection of Northwest First Avenue and Northwest 18th Street.

She said her yard has had a hole in it, construction vehicles have been parked in front, and her water has been cut off.

“I would wake up 30 minutes before going to work with our water being totally cut off without any warning,” Arnold said.

As part of the project, the CRA is awarding grants totaling $200,000 to business owners in Midtown for renovations to the exteriors of their buildings. About 18 grants totaling $180,000 have been approved thus far.

Sela said that business owners wanting to apply for the remaining funds should email info@gainesvillecra.com.

The festive mood continued into the award ceremony and evening programming, with dancing and balloon throwing between the awards.