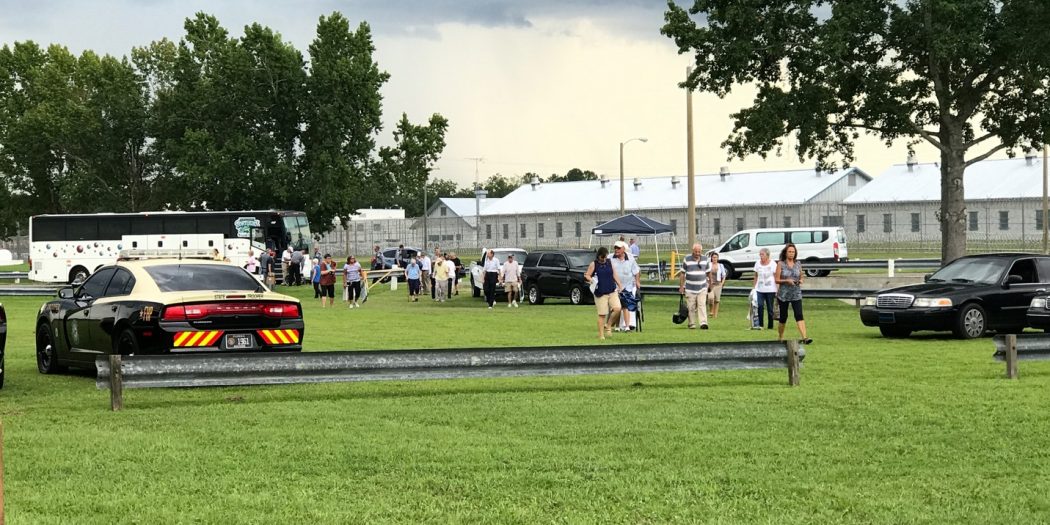 Protesters arrive at the Florida State Prison to begin a vigil before the execution. (David Jones/WUFT News)

Mark James Asay had no last words for witnesses as a lone bell tolled outside the prison walls to mark his execution.

The 53-year-old was sentenced to death for the 1987 murders of two Jacksonville men, Robert Lee Booker and Robert McDowell.

After nearly 30 years of waiting on death row, Asay chose his final meal on Thursday: fried pork chops and ham, french fries, a can of Coke and vanilla ice cream.

Meanwhile, opponents of the death penalty began to gather outside of the Florida State Prison in Raiford to hold a vigil.

Miriam Elliott, 66, co-coordinator for Gainesville Citizens for Alternatives to the Death Penalty, has protested dozens of executions outside the prison.

“We try to come up here as much as we can to provide a presence and let all of Florida know that we are opposed to the execution,” Elliott said.

Elliott’s Alachua County group partners with various death penalty opponents from around the state, many coming from Catholic parishes.

“The stance of the church is we believe all life is sacred, from the womb to the tomb it’s a seamless garment. You cannot be for the life of the unborn and not for the life of someone who is here,” said Pastor Phil Egitto of Our Lady of Lourdes Catholic Church in Daytona Beach.

Egitto was accompanied by around 45 of his parishioners on the two-hour trip from Volusia County.

“I’m all for justice for people that are being harmed, but at the same time, killing somebody at the government’s hands doesn’t give justice,” said parishioner Michael Ledbetter.

Egitto and his group joined with the other protesters in prayer as a bell was rung at 6 pm, the start time of Asay’s execution. Elliott says the bell is meant for the prisoners, rather than those at the vigil.

“They know that there are people in the field over here gathering to say ‘do not execute this person in our name,’” Elliott said.

As with most recent executions at the 56-year-old prison complex, areas are cordoned off for both protesters and supporters of the death penalty. There were no supporters present Thursday.

Asay’s case has become the first time a white man has been executed for the murder of a black victim in Florida since the capital punishment measure has been reinstated in the state in 1976.

Research by the University of North Carolina shows 71 percent of executions carried out on black inmates in Florida were for homicides involving white victims.

One of the most prominent voices against the death penalty at the vigil was that of former death row inmate Herman Lindsey.

Lindsey is the twenty-third person to be exonerated after a death penalty conviction in Florida; he was on death row from 2006 to 2009, and he had a message for Asay.

“I want him to know that we’re doing everything we can to stop this vengeance act that the state of Florida is doing. This isn’t justice,” Lindsey said.

Three years after sentencing, the Florida Supreme Court ruled that prosecutors in Lindsey’s case had failed to provide adequate evidence for conviction.

“They’re being tough on crime but there’s nobody tough on them. You’re not being held responsible for the actions you’re committing,” Lindsey said.

The common consensus amongst vigil attendees was that a life sentence without parole is the most severe form of punishment that can be handed down by a court.

“The person is confined. They’ll never again be out in the community and a danger to others,” Elliott said.

Asay’s execution was the first since January 2016, when a U.S. Supreme Court decision put a halt on capital punishment in the state.

Asay’s case sparked controversy, as some of its circumstances were debated for years. The Florida Supreme Court recently acknowledged that for more than two decades it mistakenly believed that McDowell was black, according to the News Service of Florida. Asay had no legal representation for 10 years, while being on Death Row, which violates state law.

The case leaves some questions unanswered, considering that part of Asay’s case records was destroyed after being left in a rat-infested facility, NSF mentions.

Also, the Florida Supreme Court has previously opened an investigation on one of Asay’s previous defense lawyers, Mary Catherine Bonner.

The execution also marks the implementation of a new formula involving a drug never used before for that purpose.

Recent protocols for executions released by the Florida Department of Corrections show that the first sedative drug, midazolam, was replaced by etomidate. That change led to an appeal by Asay’s lawyers this summer. Asay’s lawyer, Marty McClain, argued that an injection of etomidate can cause pain and involuntary movements, and that it makes the new protocol unconstitutional. However, a Duval County judge denied an appeal.

A spokesperson for the Florida Department of Corrections declined to comment on the new lethal injection drug at a press conference.

After Asay’s death, 360 inmates remain on death row in Florida with the longest time served around 42 years.

The News Service of Florida contributed to this story

* This article has been updated to correct an earlier version that stated Miriam Elliott is the new co-coordinator for Gainesville Citizens for Alternatives to the Death Penalty.