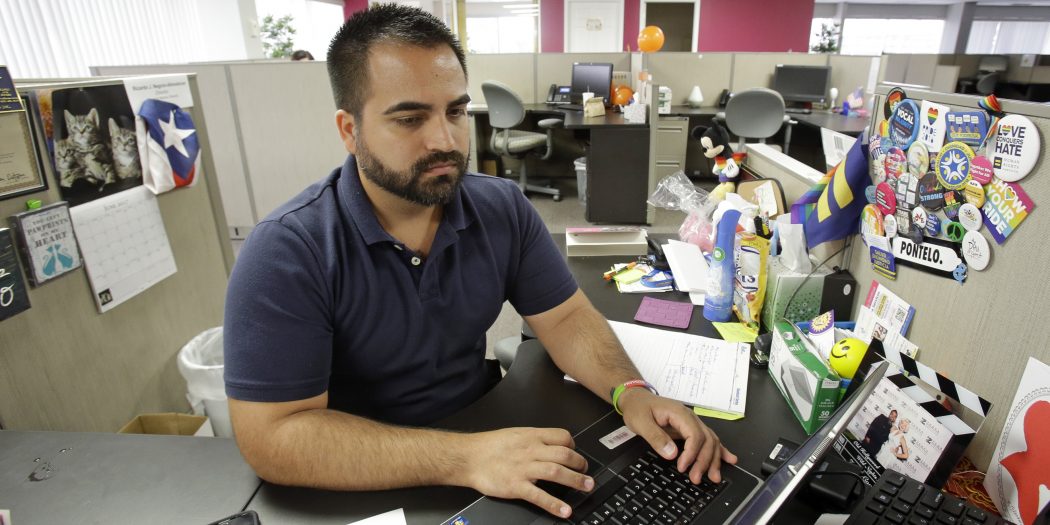 Ricardo Negron works at his office in Orlando, Fla., where he runs a community center. Negron, who trained as a lawyer in Puerto Rico, said he doesn't have the time or the money to take off three months to study for the Florida bar exam to practice law. (AP Photo/John Raoux)

Some Puerto Ricans Struggle To Find Careers In Florida

Kaisha Toledo was studying for a doctorate in psychology in Puerto Rico, but after four years in Florida, she still hasn’t found a permanent job in her field.

Ricardo Negron passed the bar on the island, but still can’t work as a lawyer in Florida. Carlos Martinez got his nursing license in Puerto Rico, but still serves up lattes as a Starbucks manager in Orlando.

Residents of the U.S. territory have been U.S. citizens for a century now, and should have a built-in advantage as Americans when they move to the mainland.

But as the island’s best and brightest join an exodus of nearly half a million Puerto Ricans coming stateside to escape the territory’s 10-year economic recession, they’re hitting the same barriers most migrants face: language difficulties, costly certifications, confusing requirements and culture clashes.

“We don’t know the system yet that well, so we’re learning on a learning curve,” Toledo told The Associated Press. “We just find that jobs are very specific and they say you need to have two or three years of experience, but it’s like, ‘OK, but if you don’t open the door for me, how will I be able to get that experience?'”

Puerto Rico’s Instituto de Estadisticas said managers and professional workers made up the largest category of people moving from the island in 2015. Since then, the island’s 3.4 million people have endured multimillion-dollar debt defaults, soaring foreclosures, a crumbling pension system, states of emergency at government agencies, deep cuts in education and an unemployment rate of 12 percent, nearly triple the mainland rate.

“Everybody is leaving the island, from the neurosurgeon to the janitor,” said Vicente Feliciano, an economist in Puerto Rico. “Young people are leaving, and thus, you have fewer taxpayers to support an increasingly elderly population.”

New York was their top destination during the last major migration wave in the 1940s and 1950s, but now Central Florida is where they land, with more than 1 million Puerto Ricans living in the state.

“There’s the weather, and you will find Puerto Ricans, you will find the food, everywhere. So it’s the next best thing to being home without having the issues,” said Negron.

Before leaving the island in 2015, Negron had lined up a legal assistant job at an Orlando law firm. But after arriving, his position was cut. He now runs a community center and says he lacks the time or the money to take three months off to study for the Florida bar.

“I would have to shut myself in to study, and I’m like, ‘How am I going to live? I’m not going to get more student loans to study,'” Negron said.

Martinez has worked at a theme park, a hotel and a store since he left the island three years ago, but he still hasn’t found a nursing job because he hasn’t found the time or money needed for the prep class needed to study for his license in Florida.

Many Puerto Ricans move from the island without the proper preparation, said Sami Haiman-Marrero, who runs a marketing and business development firm in Orlando. With her friend, Jackie

Mendez, she now offers orientation sessions to new arrivals on how to adapt to life and workplace norms in central Florida.

“You can’t kiss your co-workers on the cheek … Don’t start talking about personal things … You are supposed to be there at five minutes to the hour and be ready to work … You need to have command of English,” Marrero said.

Janice Dones, who moved from Puerto Rico a year ago and attended a recent orientation said, “It sometimes doesn’t feel like we are part of the country.”

Her feelings reflect a common refrain among islanders — especially those who voted for statehood in a non-binding referendum this month — that Puerto Ricans are treated like second-class citizens. Gov. Ricardo Rossello now hopes to persuade Congress to make the U.S. territory the 51st state, which is unlikely under Republican control, since Puerto Ricans tend to favor Democrats.

“We have been a colony for 500 years, and we have had U.S. citizenship for 100 years, but it’s been a second-class one,” Rossello said after declaring victory.

Meanwhile, people like Toledo just want a chance to work as professionals again.

When she moved to Orlando four years ago, Toledo got a job as a mental health therapist and case manager at a private company, but soon the company ran out of money and stopped paying her.

She found a job at another company, but that also didn’t pay what she had been promised. She eventually found a job out of her field, as a community organizer. She loves it, but misses the fulfillment of working with autistic kids.

“Everybody is trying to make a better life,” Toledo said. “I hope people will look at people like me, who have studied, and give them an opportunity.”

The Associated Press is a wire service to which WUFT News subscribes.
Previous Scott’s Net Worth Rebounds
Next Three Different Shootings Occur In Gainesville Within Two Hours