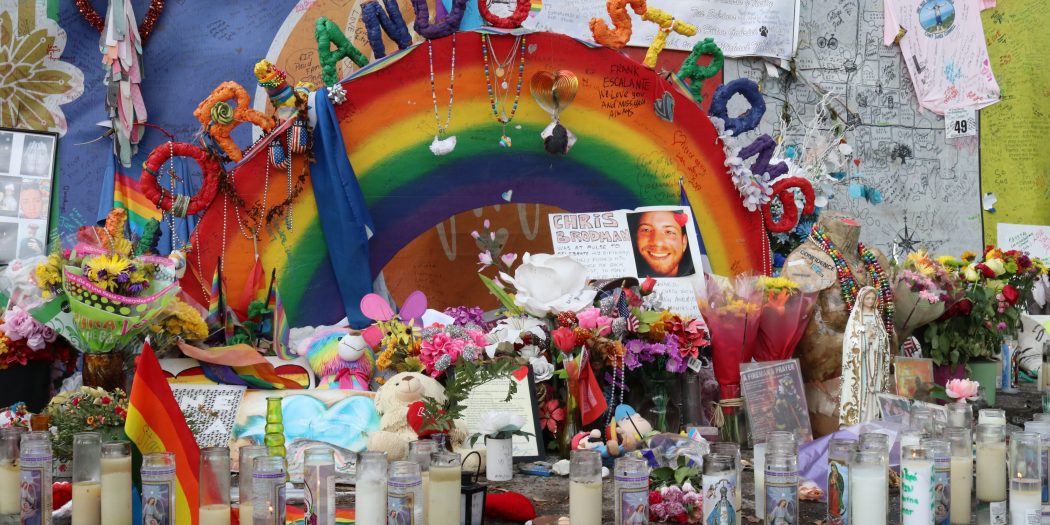 By Cecilia Mazanec and Meghan Mangrum

Some brought offerings — flowers, candles, water bottles, heart-shaped notes to hand to others. Some just brought their tears.

Some wore rainbow colors or “Orlando United” shirts.  Some wore t-shirts emblazoned with one of the fallen’s photographs.

Some deeply identified with the victims – they are members of the same community, use the same labels:

Some had danced inside the club’s walls, their own sweat dripped upon its floors.

Before a gunman opened fire in Orlando’s Pulse Nightclub. Before 49 lives were lost and a community was changed forever.

But they all came. To pay their respects. To mourn. To remember.

Underneath the soft light of the Orange County Regional History Center’s One Orlando collection, Ruby Ferrell, 9, presses her head against the wall and leaves a message — a message about her experience and her understanding of the Pulse massacre.

Her mother, Cynthia Lynn Ferrell, brought her to the exhibit because she “already knew about it,” as Ruby proclaims.

Because on that Sunday morning a year ago, her father was traveling in Boston and she was going to camp the next day.

Because her mother worried the kids at camp would tell her about the tragedy in a way she wouldn’t have presented.

Because her mother, an Orlando native, is the type of person who would go on to counter-protest Westboro Baptist Church’s presence at many of the 49 funerals.

Because her mother would “spray the angels,” giving mourners relief in the June heat with a spray bottle full of water.

Because her mother says “I already raised her to be aware of the differences in people and to celebrate those differences and to accept everyone and that love is never wrong.”

Because it is “an  honor to parent a child, to give those beliefs from such a young age up.”

Passion Suarez and Demi Hazzard were at Pulse that night, one year ago today.

“It was really scary that night. Probably the worst feeling that you’ll ever feel in your life,” Suarez said. “It’s kind of like a big tiger behind you and not knowing what’s going to happen next but then when you come here a year later, I mean that fear is still there.”

Yet, fear is not all there is. Because now there is love, there is unity.

“Seeing everybody here coming all together and stuff, it’s kind of not usual because before all this happened we didn’t see everybody getting together,” Hazzard said. “Ever since the shooting, now everybody’s full of love and joy and happiness.”

Diehl swirls his paintbrush in the middle of his wooden star. It looks like an almost-perfect tie-dye swirl. He is there to paint, but he is also there for his girlfriend as her rock.

Jodejuden, Diehl’s girlfriend, used to perform at Pulse as part of the dance group “#Squadgoals” during the club’s Twisted Tuesdays.

“It was just a group of friends who got together. We’d wait for hours to sign up because it was first come first serve, but I’ve been coming here since I was 18,” Jodejuden said of the nightclub.

She was in Texas when she got the news via a text from a friend that read, “We are never performing at Pulse again.”

“For me at least, I didn’t really know what to except today. I didn’t know if there’d be people breaking down or how the event would be set up,” Jodejuden said. “I felt like it was important now a year later, that its worth the risk if something happens, to be out here.”

And it was worth the risk, Diehl agrees.

Following the unveiling of the Sea-to-Sea Rainbow Flag, stood Sister Enya Bocca in the grass behind the row of cameras that had filmed the display. With Bocca was Sister Koochie Koo and Postulant Ivana Humpalot. All three, Bocca said, are members of the Orlando chapter of the Sisters of Perpetual Indulgence, a charity activist organization.

“We’re here to spread love and light in our Orlando community and be there as a comforting agent for everyone that needs a shoulder to cry on or just a hug,” Bocca said.

Bocca said the crazy outfits, which emulate the outfits worn by nuns, are meant to engage people in conversation about the organization.

“We’re a very prominent face and figure in the LGBTQ community here in Orlando, so we’re just here to support our community.”

Lizzie just turned 2 on May 26. She lives in Savannah, Georgia and loves to say hello to new people.

Lizzie is a Golden Retriever. She is a comfort dog with the LCC K-9 Comfort Dog Ministry. She isn’t the top dog though — that’s Karen, another golden.

Last year, Lizzie and her team were invited  to Orlando right after the tragedy. The team of eleven dog and handlers wanted to come back to Orlando for the anniversary.

The four of them stand in a row. Side-by-side, they look related — they have the same long straight hair, the same smattering of freckles, the same friendly smiles.

The ages correspond to their heights, big to little. Casadie is 14. Delanie is 11. Emmalie is 10. Fynnlie is 7.

They are handing out handmade, rainbow hearts. “Spreading love,” Delanie said. “Because there’s too much hate in the world.”

The girls started handing out hearts at the crowded blood drives last summer. Delanie wanted to give blood, but she was too young. So the girls make them while they watch television, sometimes 50, sometimes 100 a day.

Today, when they finish handing out today’s batch of 2,000 hearts, they will have handed out 20,000 hearts.

“Because there’s too much hate in the world,” Delanie said.

Despite the heavy summer humidity and the hundreds of people milling around outside Pulse Nightclub, Bradleigh Branscum gently strums on his ukulele.

He was up until 5:00 a.m. the night before, teaching himself how to play the Beatles song.

“Nothing you can say but you can learn how to play the game. It’s easy.”

Branscum wants to figure it out, so that when he “finally nails it,” he can sing and see if other people commemorating the one-year anniversary will sing along.

“There’s a good vibe going around. A lot of people have a feeling of just peace and love,” Branscum said. “It’s a little sad but you still get a good vibe from everybody around…you don’t feel anything negative around you right now.”

He keeps strumming and singing softly and soon two passerby join in.

When the shooting in the nightclub began last June, BenDeLaCreme, a drag performer known for competing on RuPaul’s Drag Race, was staying in a hotel with other drag queens before a show. The performer a show that night, and BenDeLaCreme said there was weeping both onstage and in the crowd.

A year later, there was laughter. A year later, BenDeLaCreme was on a stage again, but this was one was in front of tiny children. The Orlando Public Library hosted Drag Queen Storytime, where BenDeLaCreme read children’s books, “Llama Llama and the Bully Goat,” followed by “My Princess Boy.”

“Once upon a time, I was a princess boy,” BenDeLaCreme said, prefacing the story. “And people weren’t always nice about it.”

But with the chance to work with children, an opportunity BenDeLaCreme said isn’t common, there’s a chance to promote space for young people to hear messages of inclusivity and power.

“I mean that children are the future but actually it’s up to us to help them be the generation that we know that we need them to be.”

On a small stage in the downtown Orlando Public Library, Leonardo Linares sings gently. His song, titled “Cae,” means fall in Spanish, and Linares said it’s about people growing wings amidst their falls and becoming angel to those around them. Singing in Spanish helped him honor the fallen, he said, but the shooting itself brought light to all the wonderful Hispanic and Latino people in the community.

“I feel like I’m singing here for my sisters and brothers,” he said.

Linares said he wants to emphasize the fact that people don’t need to have incidents like the attack for people to come together and do positive things for each other.

“Who cares where you come from?” he asks. “Who cares what your religion is or what language you speak? Just be kind to others. That’s all I hope that this can bring.”

It’s cloudy outside the Pulse Nightclub memorial, and Ryan Lilly is crying. He was supposed to be at the nightclub the day of the shooting, but he felt sick and wanted to get some sleep. A year later, standing in front of the rainbow memorial scattered with candles and scribbled notes, the event still brings him to tears.

He said he wishes he had more time to uplift those around him.

“It’s people you love and people you don’t know you love,” he said. “Because it could be you. I want the world to love each other more.”

He and his wife had just closed on a house a few miles from the nightclub. The weekend was already stressful.

He found about the tragedy from his mom. But the new house was empty and they needed something to make for dinner. So Bradley went to Fresh Market — for groceries, for Sunday dinner, for understanding.

“There was this persistent sound of helicopters that did not go away. It felt like forever,” Bradley remembers.

So the Orlando resident of 31 years, did what he already did as a poet — he wrote about it.

Prayers are easy, as if a God who planned this will siphon the blood from the dance floor back into the bullet wounds they came from if enough of you ask nicely.

There are better things you can do with your hands, you know this, but yet you continue to barter, shrug your shoulders when you don’t get what you want, until a name you know falls out of your mouth and you can’t hear it over the wake of helicopters.”

Cecilia is a reporter for WUFT News and can be contacted by emailing mazanecc@ufl.edu.
@@CeciliaMazanec
Previous Police LGBT Liaison Team Helps Gainesville Residents Feel Safer
Next What Does the UAA’s Record $128 Million Budget Entail?