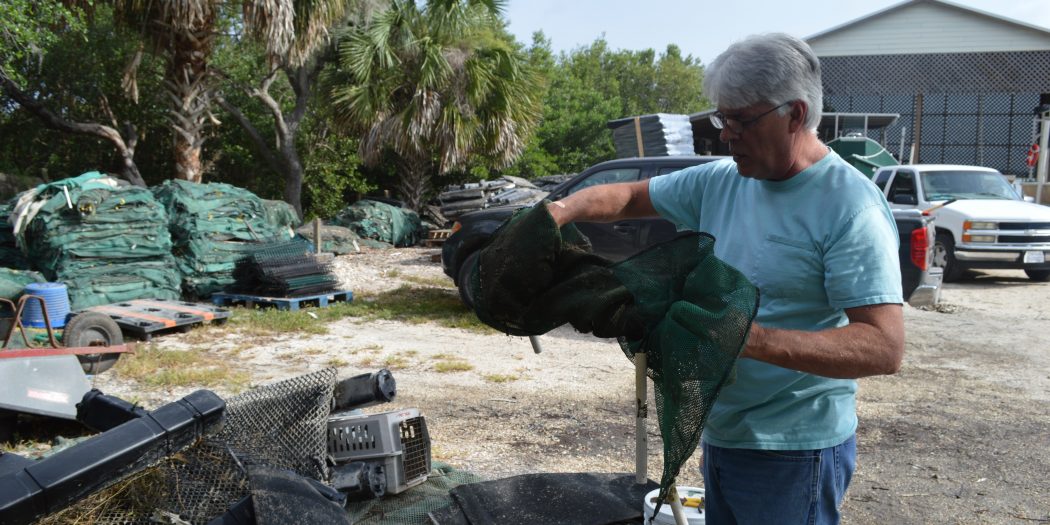 Michael Smith, the general manager of Cedar Key Aquaculture Farms Inc., demonstrates what happened to mesh bags clams are harvested in when Hurricane Hermine hit. They were twisted up, and workers had to spend time trying to straighten the bags out so the clams can survive. (Cecilia Mazanec/WUFT News)

In Cedar Key, Hurricanes Are Always A Risk Of Island Living

By Monica Humphries and Cecilia Mazanec

Cedar Key’s City Hall sits on the corner of C Street and 2nd Street. It’s yellow with a green trim, and like most of the buildings in the island city, its exterior is faded, worn.

But unlike most of the buildings where Cedar Key residents work and live, city hall is empty. Ten months after the worst storm many of the islanders can remember, those in the government are still working inside a temporary facility, behind their now moldy offices.

Virgil Sandlin, the city’s chief of police, said he thinks it’ll be three or four months before the government moves back. But as shown by Hermine, the hurricane that struck last fall, weather has a way of changing plans.

“It just depends on the weather,” Sandlin said. “If we get another storm in here, we’ll be waiting again.”

And in the wake of the upcoming hurricane season, waiting — and the patient preparation that accompanies it — seems to be a lot of what the Cedar Key residents are doing. As Kathy Carver, the owner of Mermaid’s Landing Cottages, said, there’s really not much she can do besides trying to get the furniture out of the cottages if it looks like it’s going to flood.

“The only thing I can do is leave if it looks like it’s going to be bad again,” she said.

But last September, leaving didn’t seem like a necessary action.

“We just thought … we might get a little flooding,” she said. “And I will tell you, it was the scariest thing that I’ve ever been in.”

As all nine of Carver’s cottages flooded during the hurricane, she watched water rush toward her from underneath the five doors in her house. Around 1:30 a.m., after a panicked call with her boyfriend, she left her house with rain gear and a flashlight and found a higher house across the street, where she waited out the storm.

Now, eight of Carver’s nine cottages are back up and running, but it’s been a slow process. With volunteers coming from within the community and outside the state, Carver tackled the cottages one-by-one. Each had to be stripped of appliances and furniture and then dried out.

But “up and running” doesn’t mean the work is complete. Carver said she’s still suffering from the residual effects of the hurricane. All of the cottages need to have their cable rewired, she said, and as the summer months approach, she doesn’t have air conditioning in her house.

She’s trying to retire. About a month ago, she said, she put the cottages back on the market. But the upcoming hurricane season has her worried.

Just last week, a storm pushed water up to the back steps of her home and a foot away from her lowest cottage.

“The surges are killers,” said Michele Boivin, the office manager of Faraway Inn, a cluster of cottages on the edge of the Gulf.

Boivin saw five-foot surges during the storm last week: five feet less than the surges that hit the inn during Hurricane Hermine but enough water and force to flood an inch of the inn’s lowest rooms. It had been fully open for a little over a month.

For those in the clamming industry, like Michael Smith, he’s not yet sure of the damage Hermine has caused. Smith is the general manager of Cedar Key Aquaculture Farms Inc.

“You still don’t know the extent of it until you get through that entire year’s worth of planting,” he said. He thinks it will be two years before his farm totally recovers.

Clams are planted in nylon mesh bags and staked to the bottom of the Gulf of Mexico. Anything that isn’t staked down well can get blown around and twisted. Clams can’t survive when that occurs. Farmers must go out on boats and straighten the bags out, but it’s a lot of extra work, especially for a bigger clamming business.

“When you’re planting ten thousand bags, it’s a lot harder to go out there and check every bag,” he said. “You just kind of hope for the best.”

Smith has doubled the stakes he’s using to secure the bags and added extra precautions.

When you live on an island, said City Commissioner Sue Colson, storms are a perpetual danger.

“If you want a place that’s near the water, and you want to see the water, and the residents understand that the visitors want to be on the water, then your facility is going to be constantly at risk,” Colson said.

Still, at the city’s hurricane preparedness day on May 25, Colson said over 100 people showed up.

“That’s a good sign that they wanted to be [prepared],” she said. “Of course, it’s the day after that storm [last week], so I would think that they would start thinking again.”

Red Cross and Levy County Emergency Management were among other organizations providing residents with the three H’s: hazardous waste information, hurricane information and, for a more satisfying taste, hot dogs. One main focus of the day was the importance of securing propane tanks to the ground.

That’s one of the things Pat Bonish, the owner of an art gallery called Bonish Studio, said the community now considers when getting ready for the hurricane season after last year when the tanks were washed away in the flood. He said when he walks around the city now, he sees the tanks tied and bolted down.

It’s those little things that you might never have thought of before but come to mind after Hermine, he said. Keeping life jackets on hand for your dogs. Scanning family photographs onto a hard drive. Buying cinderblocks to raise your furniture in case of flooding. He mentions more on his blog, in a post even Commissioner Colson recommended reading.

Bonish held a hurricane party last year and ended up being rescued from his home by boat. This year, he’s looking into a far tamer preparation: working with his wife to remove everything below the two-foot benchmark Hermine set in September.

Should a hurricane hit the island again, Colson said, people would have to judge the situation in regards to their living circumstances to decide whether to stay or leave. Damage can come regardless, and if it does, the only thing Cedar Key residents can do is clean up.

But the folks on the island are resilient, she said. To live here, they have to be.

You have to understand, she said, that Cedar Key, like places prone to mudslides and fires, comes with its own inherent risks. Residents must be aware and ready to pick themselves back up if hurricanes break apart their homes and businesses. It’s just a part of the “island life.”

The residents are prepared, but still, Colson said, “you got to be ready to be not attached to things you love.”

Monica Humphries is a reporter for WUFT News and can be reached at 407-256-6899 or monicamh@ufl.edu.
@https://twitter.com/MonHumphries
Previous Fourteen Spice Overdose Victims Sent To Hospitals In Alachua County After Memorial Day Weekend
Next 25-Foot Wide Sinkhole Opens In Newberry